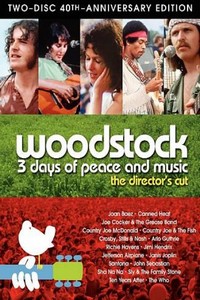 The Woodstock Festival is one of the many defining moments of rock music in the 1960s and 70s. It defined the counterculture movement at the time and had many of the biggest names in music show up to perform. Warner Brothers scored a major coup by acquiring the rights to make a documentary of the event for a mere $100,000. Another half a million dollars later and the studio produced Woodstock, a documentary on the festival that wound up winning an Academy Award for Best Documentary for Michael Wadleigh and featured such luminaries as Martin Scorsese (yes, THAT Marty Scorsese) and Scorseses seemingly personal editor Thelma Schoonmaker editing the final product.

Coinciding with the festivals 40th anniversary, Warner has released another edition with another hour of additional footage. Adding in the hour from the “Directors Cut” released in the 1990s, this “Ultimate Collectors Edition” boasts another hour of footage included to bring it out to almost four hours.

Following the events of Woodstock, were given a unique vantage point as Warner didnt film the aftermath or the beginnings; this is from the beginning of the festival to the end, with all points between. It gives you a unique look at what happened as its happening, with the vantage point of almost nearly unrestricted access. You are on stage with the bands as they play and in the crowds as they watch, backstage with the performers and producers alike.

Its fascinating to see as we see some of the bigger names of that era perform as well as ones that havent survived either by losing their popularity or by dying through various means. The fact that Janis Joplin and Jimmy Hednrix can share the same stage with Canned Heat and Mountain, as well as The Who and Crosby, Stills, Nash and Young makes for some of the more eclectic moments in the documentary.

Watching the documentary then, one would get an insight into one of the biggest events of an era of change. Watching it now, its interesting to see one of the more influential events of the last forty years with some more perspective than it had during its time. We can see the peace movement that shaped the minds of many of todays most powerful figures in its heyday; its an interesting time capsule to say the least.

Seeing Woodstock gives you a much different perspective then merely by studying what people thought of it or wrote about it; while its second to actually having experienced it, it gives you the best possible perspective outside of living through it.

One of the main complaints about the initial DVD release of Woodstock was that its audio/visual capabilities were subpar to say the least. Compared to VHS quality in its initial release onto DVD, this edition has been given a significant upgrade in that its production values are finally on par with the medium of the DVD itself. While it still shows some significant grain and the audio does have some lapses where it doesnt fully use a good system, overall it has been upgraded significantly.

The Documentary is split into two pieces, with the first part on this disc.

The Museum at Bethel Woods: The Story of the Sixties & Woodstock is a feature looking at the museum designed to take look a look back at the event. Hosted by Vernon Reid, who founded the band Living Color (an all African-American hard rock band known for their hit “Cult of Personality”), its a brief piece about the museum itself and more of an advertisement for the museum itself.

No extras are contained on this disc, but the second half of the documentary is on it.

Woodstock: Untold Stories is a series of cut scenes and music performances totaling around two and a half hours of footage. Getting in performances from bands mentioned but never shown on stage at Woodstock, this is a documentary on Woodstock in and of itself. One imagines that this couldve been released side by side with the regular documentary, consider the sheer volume of material to work with. And its good material, too, as this isnt stuff that was reasonable to exclude from the main documentary for quality purposes. Some great performances from Jefferson Airplane, The Who, Joe Cocker and others are included and well worth the view.

Woodstock: From Festival to Feature is a collection of 15 featurette combined to talk about the Woodstock experience. Using the then brand new Ã‰clair camera, which allowed for quick lens change, its interesting to hear everyone discuss the film with nearly 40 years of perspective out from it, as well as perspectives through the years as some archival interviews from the past that are included, to give one an amazing perspective on the sheer volume of work it took to make the documentary (and the festival) work as the film-makers seemed to be on the same page as the organizers in terms of getting things organized.

There was a crass commercialism about the Woodstock Festivals that followed the original in the 1990s and beyond that sullied the reputation of the original. Watching this documentary it sinks in even further, as seeing people who wanted to change the world via a festival of music and art is shockingly different than seeing Limp Bizkit play while people rioted. For those who didnt live through it, and instead have an impression of Woodstock via MTV and Fred Durst, this is the definitive feature on the original (and best) Woodstock Festival.