First off this week, I’ve got to apologize for how erratic the column’s been lately. A little while back I got a new and higher paying job, but its also one that’s pretty strenuous and time consuming, so even getting a good night’s sleep hasn’t exactly been easy, and getting my column out on time has been a lot more difficult than it used to be. I haven’t been able to go on five hours of sleep since I was in college, so I take as many cat naps as possible while still trying to take in as many movies as I can while I’m not at work. I hope I can get in a better routine as far as the column goes, and I’m trying to take steps to ensure it.

Also, the schedule with my writing has been so all over the place, that I haven’t even gotten to mention a few things I’d like to get to before I finish up my thoughts on Terminator Salvation and catch up on my thoughts on how the rest of the summer movies have gone in the last few weeks.

First up, I’d like to say a few words about passing of some actors that I’ve mentioned previously in this columns for the awesomeness that they’ve given us over the years. First up, of course, is David Carradine. This is a man who wasn’t loved by all. I think even in the geek community that Carradine was a bit of a joke for a long time. Not only did he take the spot that should have been Bruce Lee’s in Kung Fu, but Carradine had kind of pissed away his career for a long time ago, starring mostly in low budget, shlocky fair, with the exception of legitimately good film work in the 70’s like Mean Streets and Boxcar Bertha and the occasional Cult masterpiece like Death Race: 2000 , The Long Riders and Lone Wolf McQuade to his credit.

Thankfully, like he’d done time and again, Quentin Tarantino seemed to recognize just how magnificent Carradine could really be, and maybe had always been, when he cast the actor as the title character of his magnum opus Kill Bill. Sure, Warren Beatty had to drop out of the movie in order for Carradine to get the part, but once we really got a look at him, we found out that this was really the role he was meant to play his whole life. Something with Carradine as Bill really struck a chord when you saw him onscreen; it’s the type of role, like Mickey Rourke’s recent turn in The Wrestler, where it seemed like all the hardships he’d put himself through lead up to this moment, and there was the real Carradine up on screen for the first time in a long time. 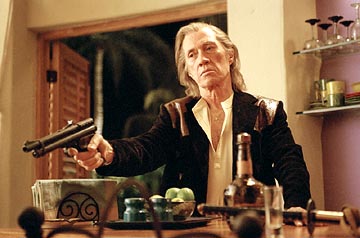 Of course, here’s hoping that Mickey Rourke doesn’t go down the same path, as Carradine hasn’t exactly pulled up a Bill-like performance since then, but still we got a kick out of him when he’d cameo in a flick from time to time. Sadly, just when we’d gotten to really love him again, now he’s gone. He found greatness again, and for a long time I think Bill is going to stand as one of those great movie characters because of Carradine’s work, but we’ll never see the Grasshopper again and I’m truly sad to see him go.

As if this wasn’t bad enough, we Martial Arts fans lost Kien Shih on the same day. His credits spanning from the late 1940’s to the mid-90’s, Shih was a fixture in Hong Kong Cinema, appearing in some of the most important works the country has ever produced, including Jackie Chan classics such as Drunken Master and The Young Master, as well important vehicles for Chow Yun Fat and Jet Li, like A Better Tomorrow III and Once Upon a Time in China. For many though, Kien Shih will always be known as one of the great villains of all time; the immortal Mr. Han from Enter the Dragon.

This is about as memorable as Martial Arts villains can get, as Han is pretty much the Kung Fu baddie standard that all others are measured by. Does he have his own private island fortress, complete with private army? Check. Does he hold his own secret Martial Arts tournament that only the best fighters in the world may enter? Check. Does he have ridiculously powerful bodyguards, even though he himself is a master of Kung Fu? Check. Does he have a deformity, which somehow makes him an even more invincible bad guy? Check. Yes sir, Han has it all. This is as “EXTRA-ordinary” as villains can be. If he didn’t have to face Bruce Lee, the greatest of all Martial Arts heroes, it probably would have taken an A-list hero like James Bond or Indiana Jones to take him down.

I just want to personally thank both of these men, for whether they were fighting Bruce Lee, Jackie Chan, Uma Thurman, or Chuck Norris, they were magnificent on a level that few villains have ever been before or since.

Alright, with the solemn moments out of the way, we now return you to your regularly scheduled column and my wrap up of Terminator Salvation.

So last week, I went over how I thought this movie was far from perfect, but also didn’t see how so many had come to think of the movie as a dog, when the final product is pretty entertaining on a lot us levels. Problems with the script notwithstanding, there’s still a lot to like here. I talked in depth about how much I like Christian Bale and Sam Worthington in the picture, but I haven’t even really gone over my favorite performance in the movie yet.

That performance undoubtedly goes to Anton Yelchin as Kyle Reese. Now, while Yelchin doesn’t get the screen time of the leads, who themselves don’t really get enough time onscreen, he absolutely makes the most of every second he’s in this movie. For the second time this summer, Yelchin takes a role that was previously made iconic by another actor, taking over for Walter Koenig as the younger version of Chekov in Star Trek and now as Reese, the role made famous by fanboy demi-god Michael Biehn in the original Terminator installment, and in neither case does he disappoint.

First off, I would like to state Kyle Reese is not only the best character of this entire franchise, but the role just another testament to the fact that Michal Biehn should have been an absolute superstar. The most human character of the whole series, Reese lives through hell fighting the war against the machines in order to get one mission, and as a result gets one moment of happiness before his life is taken saving humanity. To be able to finally get to see this character onscreen again is one of the best gifts McG could have given us, and the way Yelchin is able to inhabit this character only adds to this fantastic return. Getting all of Biehn’s facial and physical characteristics down pat, I almost got chills getting to hear “come with me if you want to live” come out of his mouth. 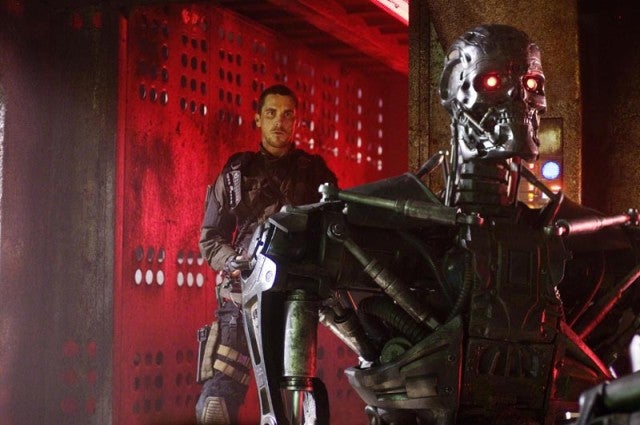 Then again, while some have felt like this movie relied too heavily on call backs (heck, the last thirty minutes is a giant callback to the endings of the first two films), isn’t that part of the fun of these types of franchises? I mean, what’s more perfect than a Terminator movie that ends up in a factory for some man vs. machine action?! Why was Cameron exempt from criticism for giving us “I’ll be back” and other lines over and over, when hearing it come from John Connor in this movie gave me just as big a smile? Heck, getting to hear Guns-N-Roses pretty much completely sold this movie for me.

On a side-note: I’ve got a theory that besides the recordings from his mother, that the G-N-R tape he’s got is the only one that made it through Judgment Day, and Connor listens to it all the time to get himself pumped up before going into battle, kind of like Robert Duvall‘s Colonel Kilgore plays Flight of the Valkyries in Apocalypse Now. I can imagine that everyone around him is completely sick of the song, but he can’t get enough it and if we’d seen him with his jacket off, we’d have seen that somehow he also saved his trademark Public Enemy shirt too! Anyway…

On top of all this, McG packs this movie with action from beginning to end, and while I was expecting battles like the ones in the flashbacks for the first three movies, I was perfectly happy to get the very Terminator meets Children of Men meets Road Warrior chase scenes and fights that are in this flick. The “helicopter” sequence at the beginning of this picture is an absolute showstopper, and is probably one of the best action scenes of any movie this summer. Add to that “The Harvester” sequence, tons of other chases, and anything to do with the ending and you’ve got an all you can eat buffet of total ass kicking.

I’m hoping this isn’t the last good action film of the summer. If Transformer 2 doesn’t bring the thunder we could be in big trouble, but hopefully there’s a few more handfuls of popcorn left this season.

Retro Review: The New Guardians by Englehart, Bates, Staton, and others