[Editor’s Note: the Alliance and Defiance comics have now been made available for download through iTunes by IDW Publishing for the iPhone and iPod Touch, according to their recent press release]

First of all, let’s give credit where it is due – IDW have handled the Transformers license with great aplomb since acquiring it in 2005. Unlike the Transformers titles released by Dreamwave, which tended to do little more than pay fanboy lip service to glorified high-spots, IDW has constructed an innovative new universe for these well-established characters. They have been unafraid to make fundamental alterations to the Transformers mythology, such as Cybertron being uninhabitable or Wheelie actually not being a tool. They have also made the titles more accessible by eschewing a formal ongoing series in favour of a cluster of one-shots and mini-series. All in all, job well done. Shame the same cannot be said of their movie tie-ins, though. 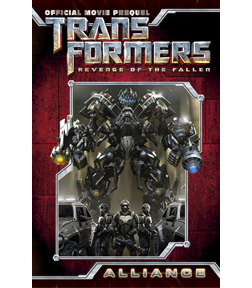 To be fair, the main flaw is rather out of their hands. The live-action Transformers movie did not, as expected, win any plaudits for an intricate and emotionally affecting storyline. It was giant robots knocking ten lumps of cybershit out of one another whilst Michael Bay made big things go boom. Transferring that visceral thrill into a visual medium that lacks motion is problematic. It has of course been done by IDW in their other Transformers titles, yet the movie versions of the characters were lacking in distinctive personalities in comparison to the work done by long-time Cybertronian comic-book scribe Simon Furman. Furthermore, any interesting developments in this mini-series have to be wound up in such a way that they connect to the actual movie, do not contradict anything contained within the original movie as well as in the sequel, and cannot alter the status quo for the general movie-going audience to any great extent. Movie prequel writer Chris Mowry faced an uphill battle before he even began to work.

Truth be told, it is hard to imagine just how much autonomy any official movie-prequel writer may have over such projects considering the typical paranoid involvement of movie studio and toy company executives. Mowry is clearly enthusiastic about Transformers and has experience working on IDW’s other pop-culture licenses, including Angel and Star Trek, yet the story in Transformers: Alliance is little more than a four-issue rumination on the closing scene of the first Transformers movie. Optimus Prime remains hopeful that other Autobots will receive his invitation to come to Earth; Bumblebee decides to keep hanging out with Sam and Little Miss Sex; the remaining shard of the Allspark needs constant protection; Sector Seven takes the punishment for its cock-ups; Generic Army Dudes continue training with the Autobots.

The only real storyline development here is that some new Decepticons arrive to search for a mysterious MacGuffin, whilst the Autobots attempt to neutralise them without exposing their presence to the world. The exact nature of the MacGuffin and the true scope of its threat to Earth cannot be revealed because, of course, it is the main hook for the Revenge of the Fallen movie. 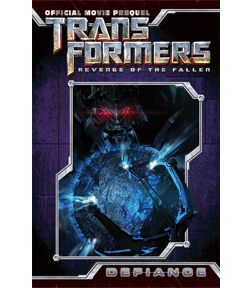 Of more interest in Transformers: Defiance, which takes the opportunity to explore the backstory of this universe rather than dwelling on already established material. Mowry takes things all the way back to the original schism between the Autobots and those that came to be called Decepticons. After an unprovoked attack on the Allspark in its temple on Cybertron by unknown alien hostiles, Optimus Prime focuses his side’s efforts on the repair operation whilst Megatron, possessed by a mysterious and newly excavated object, takes his troops to annihilate the alien assailants.

Conclusive revelations remain few and far between, of course, yet the nature of the teases here are far more interesting than in Alliance. Cybertron was not seen in the first movie, so by setting Defiance there it fleshes out the movie universe without having to resort to the standard bland padding that hinders the enjoyment of most tie-ins. Of particular interest is the interaction between the familiar Autobots and Decepticons before their grand falling out, which happens here in a rather abrupt yet still plausible manner.

The books have different art teams best-suited to their different settings. Khanna, Griffith and Figueroa combine their stylised efforts to depict the war-torn Cybertron on an epic scale in Defiance. Figueroa has provided pencils for numerous Transformers titles over the past decade, for both IDW and Dreamwave. He has also performed art duties for the Terminator: Salvation movie tie-in comic, as well as working on toy designs for Hasbro, so is more than qualified for the fully robotic, interstellar conflict driving Defiance forwards. Alliance, on the other hand, receives a sort of Americanised manga style from Alex Milne, another alumnus from the proverbial school of Transformers artists, which is more suited to the story’s terrestrial environment. It is hindered, however, by its inability to render the likenesses of the movie actors to any accurate degree. Shia LaBeouf and Megan Fox become look more like Xander from Buffy the Vampire Slayer and Courtney Cox, respectively, whilst John Turturro seems to be drawn as an altogether different character.

Still, it’s all about the bots and they are just dandy. The same thing can be said about the movies, which of course begs the question of why people should care about the movie-related comic books when there are far better Transformers comic books already being published by IDW. Perhaps if the vague, ill-defined mythology about the Allspark and the Fallen appeals, these books will provide a suitable primer for further expansion in other spin-off stories. However, unlike Star Trek: Countdown, these prequels have no engaging stories that can expand upon the movie script whilst also providing a meritorious read in and of themselves. If you had to pick one, Defiance does offer more about the history of this continuity. If you have limited funds available, perhaps you ought to save them for the movie’s DVD release instead.