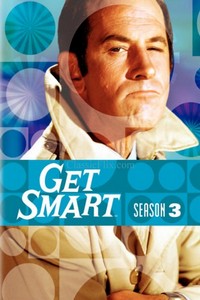 The world of espionage is fodder for comedy. Have you ever seen the executives of the intelligence agencies testify before Congress? There needs to be a laughtrack during their unclassified briefings on C-Span. A comic perspective of the spy business was hot as an entertainment genre in 1967. Dean Martin was drinking it up as Matt Helm in The Ambushers. James Coburn was loving it up in In Like Flint. Sean Connerys James Bond was the kingpin in the semi-humorous You Only Live Twice. At home, America was chuckling it up with the bumbling adventures of Maxwell Smart (Don Adams) on Get Smart. He was CONTROLs Agent 86. His prime support was Agent 99 (Barbara Feldon). They both answered to The Chief (Edward Platt). Their focus was stopping the evil plots of KAOS. Get Smart: Season 3 uncovers the romantic plot between Smart and Agent 99 that had merely been rumored as a one-sided crush.

“Viva Smart” sends 86 and 99 south of the border to rescue the president of San Saludas. They disguise themselves as a flamenco dance duo, but their cover is blown when theyre forced to perform. The evil general is played by Monte Landis. Hes the villain in numerous Monkees episodes. Rat Pack alumni Joey Bishop pops up as a guard. “The Spirit Is Willing” has Smart resorting to a seance to flip an informant against KAOS. The CIA currently does this. “Maxwell Smart, Private Eye” forces Max to take second job when cutbacks hit the office. He ends up dealing with Buddy Hackett (The Love Bug). “The Spy Who Met Himself” drops a brand new dastardly plot from KAOS. Theyve trained their agents to become impostors of CONTROL agents. Siegfried (Love Boats Bernie Kopell) personally supervises the faux-Smart. They film Smart inside his house to get proper nuances. The real Smart, 99 and Chief get jumpy as they suspect everyone not really being themselves. The evil chief brings back memories of Platts criminal film roles.

“One of Our Olives is Missing” launches Carol Burnett as a country music star. She accidentally eats a KAOS transmitted shaped like an olive. Max has to protect her until it passes through her system. “Supersonic Boom” lets KAOS threatens New York City with the sound blasts. Bill Dana makes a cameo. This is important since it was on Danas show that Don Adams perfected his agent persona. “Dr. Yes” spoofs Dr. No with another missile sabotaging villain. Wally Cox (Mr. Peepers) makes cameo. “That Old Gang of Mine” ships Smart out to British Control. He must face his most dangerous of guest stars in Sid Haig. Danny Thomas makes room for himself as the man on the street.

“The King Lives?” disguises Smart as the king of a country. Johnny Carson plays his herald. “The Groovy Guru” is the prime episode of the season. Smart and 99 infiltrate the youth movement to find an evil guru turning kids into mindless zombies. The guru is Larry Storch (F Troop) in hippie frocks. Hes got a wicked band called Sacred Cow that ought to be reuniting for a tour soon. “The Little Black Book” confuses Don Rickles (CPO Sharkey). He mistakes a list of KAOS agents for Smarts girlfriends. When these women go all the way, it means theyre licensed to kill. Ernest Borgnine adds even more class to this two parter.

“99 Loses Control” changes the dynamic of the show. Agent 99 decides to dump the career of a secret agent. She plans on marrying casino owner Victor Royal. Smart cant admit he loves her, but he goes to Europe to spy on Royal. Turns out the guy is a KAOS agent who takes over major businesses from his losing guests. The games are rigged. Smart has to admit that he does care about 99. Now hes no longer the swinging spy. Bob Hope is on his mark as the room service attendant. “Run, Robot, Run” lets Hymie (Dick Gautier) save Americas pride when KAOS takes out the U.S. track and field team. Its up to the robot agent to take the golds. Can you urine test a robot? “The Hotline” makes a the Chief think Smart has taken is job when a KAOS agent impersonates the president over the phone. John Byner (Bizarre) is the prankster. Regis Philbin proves he was once young with his cameo.

Get Smart: Season 3 is another fun batch of spy spoofs. This mid-point of the series five year run feels like a peak. The evolution of the relationship between 86 and 99 keeps the show from becoming stale. Theyre not completely going through the same gags each week. They entered a strange world wondering how a relationship can last when you dont even know your girlfriends real name.

The video is 1.33:1 full frame. The transfers make these episodes look better than the tapes that were used recently on RTN. The audio is Dolby Digital 2.0. Youll be able to hear just how close Smart gets to the target. The episodes are Closed Captioned.

Audio Commentaries are on two episodes. Barbara Feldon and writer Buck Henry discuss “99 Loses Control.” They do a fine job discussing how this episode really changed the tone of the show. Don Rickles is gold on the second part of “The Little Black Book.”

Audio Introductions from Barbara Feldon are before each episode. She gives just enough details to make you remember if youve seen the particular episode.

Get Smart: Season 3 reminds us that theres plenty of foolish nonsense in the intelligence gathering business. Smart is just smarter than the enemy agents which keeps the foolish plots feel torn from todays headlines. This boxset is perfect for folks wanting to watch the episodes without all the bonus features found on Get Smart: The Complete Season.