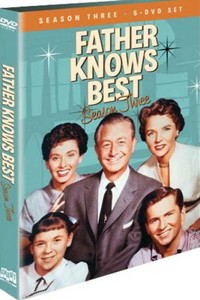 Whenever anyone babbles about how wonderful things were in the 50s, odds are they’re merely remembering episodes of Father Knows Best. The Andersons are a sweet and loving family in the ultra friendly town of Springfield. Dad (Robert Young) sells insurance and never has any major money woes. Mom (Jane Wyatt) is the happiest homemaker. Bud (Billy Gray) isnt close to a troubled teen as seen in juvenile delinquent films. Betty (Elinor Donahue) resembles the perfect older daughter. Kitten (Lauren Chapin) might be pesky, but never a brat. Who wouldnt want these people as neighbors? The original first family of Springfield are a far cry from the 21st century residents seen on The Simpons. Father Knows Best: Season Three contains 37 episodes that give little life lessons versus traumatic experiences.

“No Apron Strings” gives Bud a girlfriend. Her father is the local grocery store owner. Shes a bit controlling in the relationship. Bud promises to take her out on a fancy date, but soon after remembers it’s his mothers birthday. He must plot to get out of the house without upsetting his family. The boy is whipped bad. “Never in Twain” takes us back to the Andersons’ summer vacation at a Dude Ranch. Turns out Betty had a little thing going on with a ranch hand named Utah. She gets exciting news that hell be coming through Springfield on his train trip to Chicago. There are flashbacks to their time out West. Betty and Utah become an item around the corral. They even kiss. Although you wont see that moment since they chose to film their feet instead of the lip action. They are squeaky clean. “Betty Goes to College” has the eldest daughter ready to graduate high school. Mom and dad want to ship her off to their old university. But the daughter has her own plans. She doesnt want to end up like Lisa Bonet and Chip Cunningham. “Man About Town” proves Bud is a dog after all. Barely a month after his new grocery store girlfriend, hes on the prowl for an older woman. He lies about his age, but get trapped by the womans desire to eat at an extremely fancy restaurant instead of McDonalds. Bud has to figure out a way to afford her love.

“The Homing Pigeon” has the parallel plots of Buds homing pigeon and Betty moving out to live with a friend. Mom and dad have faith that the bird and daughter will return home. “The Old Days” is rather creepy. The PTA has a costume dance. Bud and Betty wear the same clothes their parents wore when they met. Brothers and sisters should never dress like their parents. Its just wrong. “Whistle Bait” has Betty get jealous when a new girl at school gets all the attention. Is she willing to go to second base with boys to get back the whistles? “Betty Goes Steady” puts this daughter further along with identity issues and peer pressure. She hooks up with a bunch of students to raise her social class. Shes tired of slumming it. The family cant get to her. The only hope is an intervention from Buds advisor (The Man From U.N.C.L.E.s Robert Vaughn). Can Betty be brought back to the wholesome world? Or is she doomed to be the Paris Hilton of 1957?

“The Lawn Party” has Bud wanting to host a festive night while mom and dad are away. However hes guilt stricken at being such a sneak. Think a kid in the 21st century has a problem inviting pals over for punch and pie afternoon in the backyard? Its not like Bud plans on emptying the family liquor cabinet and trashing the house like a rock star. This is such a quaint issue. “Betty and the Jet Pilot” soars with romance. The eldest daughter gets the hot for a skybird. But will she let her heart follow him to Alaska? Its a lot colder up there than in Springfield. “Bud Buys a Car” brings around that teenage rite of getting a learners permit and wanting a set of hot wheels. Bud lands a bargain of an auto for $10. He figures itll make his girlfriend go gaga. But the minor fixes might be more than the high school grease monkey can handle. “Bud, the Hero” makes the son a star. Although things dont start out so heroic when hes used as a tool by a gal. “The Spelling Bee” makes Kathy an alphabet superstar. She gets cold feet before the county files. Can the family make her brave enough to compete? Will dad beat her for being a spineless worm? “Class Prophecy” reminds us that high school yearbook predictions don’t always work. Dads old rival for most successful turns out to be a complete bust. What went wrong on his path to being a doctor?

The wholesome nature of the Andersons is overwhelming. At the end of each episodes, youre feeling as light as a loaf of Wonder Bread. None of their problems will depress you. Every family member is smiling no matter the circumstances. While Betty comes close to skipping out of the house, she always returns without any regrets. She doesnt moan or groan about being stuck in her normal house. Even though Bud goes through dozens of girls, hes not seen as a stud. Hes just a normal red-blooded American boy. Theres no undercurrents of resentment or dysfunction flowing through these episodes. This is a family that can easily correct themselves to normal with a pithy talk from dad. Father Knows Best: Season Three presents us with the perfect family in a perfect town. Sometimes its nice to have a little light family entertainment, but dont mistake the Andersons for a documentary about family life in the 1950s.

The video is 1.33:1 full frame. The black and white transfers are fine, but not exceptional. Theres specks of dirt here and there. Fans wont be too disappointed since they look better than when they were rerun on UHF channels. The audio is mono. The soundtrack level wont have you reaching for the volume control.

Audition Show (30:53) is the radio pilot for Father Knows Best that aired in December 20, 1948. They set up the Hendersons (not quite the Andersons yet) as the ultimate average family living on Maple Street in Springfield. This is audio only.

The Elusive Card Game (25:38) has the family now known as the Andersons on the radio. Dad goes nuts when he receives the bills for Christmas. Imagine that nearly 60 years ago people were whining about the expenses of the holiday. This is audio only.

An Uncontrolled Dog (26:28) is another radio visit with the Andersons, Americas neighbors. This is a man bites a dog moment in the family. Buds car fender falls off while parked in the garage. Dad doesnt buy his story. This is audio only.

A Doctor Comes to Town (25:42) is the third episode from Youngs Window On Main Street series. The show is about Youngs newspaper writer doing a feature on the doctor who is in this nice small town.

The Chambermaid (25:42) is the fourth episode of Window On Main Street. Young finds a story in his own maid.

Father Knows Best: Season Three is a guilty pleasure. Theres a sweet quality that make the Andersons so much fun to watch. Theyre the ultimate “wouldnt it be great if we could live like them” family. But we know that home life cant be this easy. Watching the Andersons gives us a little hope that sanity can be reached with the perfect father talk. The boxset is a treat for longtime fans of the series with the inclusion of the radio pilot and two episodes.