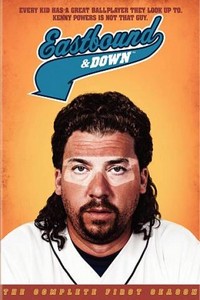 Danny McBride certainly has had an odd path to success. After starring in cult film The Foot Fist Way, McBride has appeared in almost 10 films in the last three years and has found the same sort of burgeoning stardom that Steve Carrell had before The Office made him an A-list star. McBride has found his own television series to try and make the leap from supporting Will Ferrell and gang to being a bonafide headliner on his own in Eastbound & Down, an HBO series that lets McBrides more colorful vocabulary come through. What comes out is a farce about a man dealing with the downside of his fame and career.

Kenny Powers (Danny McBride) had a meteoric rise (and fall) in professional baseball. Saving Game 7 of the World Series as a teenager, McBride became a star overnight. With a 100mph fastball, Powers reached the pinnacle of his profession and achieved much success. The problem is that fame took its toll on him, taking speed off his fastball as he bounced over the league. Its finally hit its peak when hes lost nearly everything and is forced to move back in with his brother and his family while trying to make a comeback while working as a gym teacher at the same middle school he went to.

Presented as a farce, Eastbound & Down varies pretty wildly in quality and ends up being pretty mixed in its end result. Running six episodes, its an interesting show with cameos from McBrides friend (and one of the shows producers) Will Ferrell and Craig Robinson to go with a cast that is full of relative unknowns.

McBride is the winner in all of it, of course, and Powers is the sort of lower middle class bred celebrity that people can laugh with and at in the same timeframe. McBride imbeds him with enough character and substance to make him a worthy protagonist but Powers isnt exactly the type of person you can rally behind. A foul-mouthed racist, amongst other character flaws, Powers has an interesting story and its amusing that McBride and company play a story about a mans fall from grace as such a farce.

Thats what makes the series a bit more engrossing than it otherwise normally would be. McBride and company have taken a character that normally would be in more of a dramatic role and placed him in a situation thats amusing. McBride is amusing in that he is throwing everything he has into the series. Hes cognizant of this as his chance at being a star, and having steady work, and it shows.

Picked up for another season, Eastbound & Down has all the qualities of being a great series but hasnt quite hit its stride yet. Theres more to the story and it can only get better from here.

Presented in a full screen format with Dolby digital surround, HBO has kept up its high quality releases with Eastbound & Down. This is as good as anything out there as HBO certainly has put the time and effort into making it a great looking and sounding series.

Making Eastbound & Down is a typical EPK style piece on the show, explaining the motivations for the show. There are some interesting tidbits about the show, but nothing extraordinary.

Kenny Powers Greatest Hits, Schaeffer Motors Commercials and Stevies Dark Secret are all bits from the show expanded out to full length.

The usual Outtakes and Deleted Scenes are included as well as two Audio Commentaries on the first and last episodes of the season.

Eastbound & Down has an intriguing premise and lots of potential, but hasnt quite unleashed the comedy goldmine it could be.