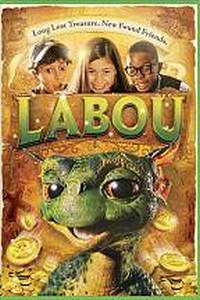 Doesnt it seem like kids movies these days are trying too hard to emulate ’80s kiddie adventure films like The Goonies? Or trying too hard to recreate the onscreen family friendly magic of The Muppet Movie? Labou, an independent childrens movie by the guy that brought us Power Rangers S.P.D., tries really hard to be both, and ends up failing more than it succeeds.

Two hundred years ago, the Pirate Lerouge was sailing with his treasure near New Orleans when a hurricane struck and hurled his pirate ship into the swamp. The impact killed Lerouge and hes been haunting the swamp ever since, looking for his lost treasure. Flash forward to present day, and Lerouge and his buried treasure is only a legend used to scare the local kids. But one day, three kids decide to venture into the swamp to find it, only to discover that theyre not the only ones looking for the treasure.

Lerouges great great great (great great) grandson is forced by the ghost on a daily basis to search for the treasure. Also lurking in the swamp is a wealthy Texas oil man and his son who want to buy the swamp and turn it into a refinery. While trying to escape the oil men and the ghosts, the kids stumble upon the star of the film, Labou. Hes a native animal to the Louisiana swamps and is a local legend himself. The Labou hasnt let anyone see them before, until he decides to show himself to the children to help find Lerouges treasure and save the swamp.

Labou has almost everything: Pirates, cowboys, puppets, adventure, action, kids saving the day. Director Greg Aronowitz has a lot to be proud of with this film, especially considering the extremely low budget and the fact that production was halted due to the arrival of Hurricane Katrina. The film does portray the city of New Orleans in a favorable light, with Mayor Ray Nagin and jazz legend Ellis Marsalis both making appearances. But unfortunately, Labou will only resonate with the kiddie audience leaving the parents bored and wishing they were watching something from their own childhood.

This DVD is presented in a 1.85:1 widescreen aspect ratio. It’s nothing flashy and it looks, for the most part, like a low budget indie film.

The sound transfer sounds like a low budget indie film as well, with crackles here and there.

The Making of Labou: Building Labou – All of the featurettes here are narrated by star of the film Marissa Cuervas and she’s adorably perky. This featurette is about creating the puppet and the techniques they used to make him move. 6:13

The Casting Process – Each of the kids are shown auditioning for the film. And a sequel is mentioned. 9:08

The Making of Labou: Part One – In the first part of this extensive making of featurette, the cast and crew discuss how they started the project, the locations they chose, and they talk about the art department and how diverse they were. At the end of Part One, Hurricane Katrina hits and the crew is forced to flee New Orleans in the middle of shooting. 21:15

The Making of Labou: Part Two – The second part focuses on the obstacles they all had to overcome to go back and finish the film after they were allowed to return to New Orleans. They had to recreate everything, which was not an easy task. They also show some of the movie making tricks they used to do some of the visual effects they wanted with such a low budget. 20:03

The Music Of Labou – Greg Aronowitz wanted different themes for the pirates, cowboys, and the Labou, so he had musicians composing songs, and had an entire score written for the film. 10:42

Special Effects – Here, they show how they did the pirate ship scene in the beginning of the film, and how they did the ghost effects. Since the pirate died in the water, they wanted to reflect that in the ghost effects. They say, “We hope you’ve never seen a ghost like this…” And the target audience has probably NOT seen Guillermo Del Toro’s The Devil’s Backbone, but that’s the first thing I thought of when I saw the ghost in the film. It is impressive that they were able to do such cool effects with their low budget. 8:43

New Orleans: Points of Interest – The three kids show us around New Orleans, with them doing some silly Power Rangers-like stuff here and there. They show us the French Quarter, horse and buggy rides, a cemetary, and a swamp tour. 6:07

After watching all the extras, I gained a new respect for Labou. The crew really accomplished quite a lot for having the low budget that they did, and they had a lot of really cool movie making tricks to hand out. I would rather watch the extras again than watch the movie again though. But I am not the target audience for this film. I’ll reserve the actual recommendation for my seven-year-old daughter who says that Labou is, and I quote, “AWESOME!”