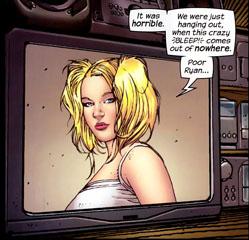 -I was attacked by a bleep once. In a pawnshop near Nairobi. Really. I did.

–You lie. The last time you told that story, you were having tea with crumpets with Jessica Simpson, the letter “Ç” and the digitally altered image of Constance Selenowsky. And it was in Cote d’Ivoire.

-I never said I’ve been to Abidjan. I can’t say that sentende. Remember the spell I was under? *batman and the shpongelettes crossover special issue 3.

—Actually, you did. You said it was in Abidjan.

-You always agree with her, Paprika. It must’ve been hypertime or bad continuity.

—What can I do if you like to embellish truth, Pippero?

–What’s weird is that this defective-bottom-lipped bimbette is saying she was attacked by a crazy bleep, but everyone knows that bleeps are really sane and can’t really go crazy. Most they do is have a bout of depression.

-I think SHE’s the crazy one. Or at least, sick.

–Too true, what’s with her chest? It’s like a slope.

—Maybe it’s Syphillis. I heard it does that to you.

-Does it make your face look like a cocker spaniel’s?

-Change the pannel, Pementah..You’ve got the remote.

–Cheap TV’s. Hate them. No buttons on them. If you lose the remote, you’re screwed.

—Pippero, why is the boombox on the telly?