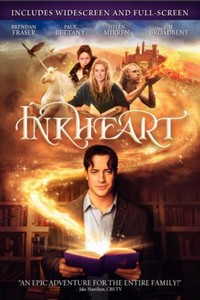 Inkheart stars Fraser as Mo, a father with the unusual power to bring the characters of a book to life just by reading out loud. He discovers that his daughter, Meggie, has the same uncanny ability. This special power proves to be disastrous. The catch? Every time a character in a book is brought out into our world, someone from our world has to go in the book. Thus is the fate of Meggies mother, Mos wife, Resa. Mo has been frantically scouring every bookstore he can find for the book that has captured his wife. This book is called Inkheart.

When the bad guy of the book, Capricorn (Andy Serkis, The Lord of the Rings trilogy), discovers that Meggie has the same ability as her father, he kidnaps her and takes her back in the book so that she will bring to life his most powerful ally, The Shadow. In the meantime, Mo has to assemble a random bunch of real people and make-believe characters to save his daughter and his wife from Capricorns evil clutches.

This film, which is based on a widely popular childrens series by German author Cornelia Funke, just never seems to gain footing. Having never read the book myself, I can only assume that the best parts of the book were left on the cutting room floor. And considering that the film was originally scheduled to be released in 2009, and then again in 2008, only to be finally released in the Spring of 2009, that is very much what likely has happened.

It seems that the book has quite the following in the acting community considering the big names attached to this project. No, not Fraser. The other big names in the film like Helen Mirren (State of Play), Jim Broadbent (Enchanted April), Andy Serkis (King Kong), and Paul Bettany (The Secret Life of Bees). They seem so out of place in this mishmash of a film. They truly are too good for this movie.

With all of its similarities in concept, I would love to tell you that Inkheart is a modern-day Neverending Story. With all of the fantastic actors in this film, I would also love to tell you that Inkheart perfectly utilizes its talent, giving our children a taste of the finest actors in the business. Instead of being destined to be a childrens classic, Inkheart will just fall among the worst of the Brendan Fraser movies like Monkeybone.

Inkheart on DVD is presented in a very nice 2.35:1 aspect ratio. The visual quality of the film is superior, as is the audio track.

The lone, lame extra is called Eliza Reads To Us. It is preceded by an intro by author Cornelia Funke, and the feature is the child star of the film Eliza Bennett reading aloud a scene from the book that was not included in the film. Boring. 3:46

Inkheart has a great premise, great actors, great potential, and still managed to bore me and my children. Occasionally we would see something that would be cool, such as the tornado from The Wizard Of Oz, and then my kids and I would talk about how we should be watching that movie instead. Unless you are already a fan of the books, I would not recommend Inkheart.