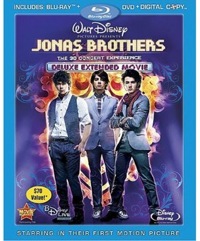 The Disney “machine” just keeps rolling along. After the surprise success of the original High School Musical, Disney has been all about targeting the tween and teen audience with their programming, music, merchandise, etc. After High School, songstress/fictional TV character Hannah Montana became popular. Now with a little help from Hannah/Miley, the Jonas Brothers are the next big music and television sensation for Disney. Disney would love for you to believe that they are this generation’s Beatles. They made a guest appearance in last year’s Hannah Montana & Miley Cyrus: The Best of Both Worlds concert film. So you knew it was only a matter of time before the Jonas Brothers got their own 3D Concert Experience.

If you didn’t know, the Jonas Brothers consist three real-life brothers: 21-year-old Kevin, 19-year-old Joe, and 16-year-old Nick. Joe is the lead singer, and imitates Mick Jager on stage a lot. He is the one that makes the girls swoon the most. Nick is the youngest, but most talented Jonas as he plays various instruments and sings as well. Girls love him as well, but that’s mainly because he is the “shy one”. Meanwhile, Kevin is just along for the ride as he plays lead guitar and sings backup. They have a squeaky clean image as their father is an evangelical pastor and the whole family is extremely religious. All three wear purity rings and have vowed celibacy until marriage. So basically they are the perfect band for Disney to market to their target audience these days.

The footage used in Jonas Brothers: The 3D Concert Experience comes from Anaheim and New York City during the Jonas Brothers’ summer 2008 “Burnin’ Up Tour”. This concert presents over a dozen Jonas Brothers numbers along with two guest performances, Taylor Swift and Demi Lovato. The film actually begins like the Beatles’ Hard Day’s Night concert film. The brothers are shown struggling to get out of bed, attempting to go through their itinerary, and are finally mobbed by dozens of hysterical fangirls. In between all the songs that are played, there is various “behind-the-scene” documentary footage thrown in for good measure. Among the vignettes are the Jonas Brothers buying the first copies of their own A Little Bit Longer album in Times Square, a group of Jonas impostors roaming the streets, and the thousands of girls waiting to see a glimpse of the real musicians. There is also a music video, filmed in Central Park, thrown into the middle of this film for the song “Love is On Its Way.”

The songs in this film include the Jonas Brothers songs: “That’s Just the Way We Roll,” “Hold On,” “BB Good,” “Goodnight and Goodbye,” “Video Girl,” “Gotta Find You,” “A Little Bit Longer,” “Play My Music,” “Hello Beautiful,” “Still in Love with You,” “Pushin’ Me Away,” “Can’t Have You, (cut from the theatrical version of the film)” “Love is on Its Way, (cut from the theatrical version of the film as well)” “S.O.S.,” “Burnin’ Up,” and “Tonight”. In the middle of that The Jonas Brothers’ co-star in Camp Rock, Demi Lovato, comes out to perform her song “This Is Me”. Towards the end, country and pop superstar, Taylor Swift, performs her song “Shouldn’ve Said No”. Much like the Jonas Brothers in the Hannah Montana concert film, Demi Lovato seems to be getting the big push from Disney to be the next music superstar. Swift is already a MEGA music superstar, but she used to date Joe Jonas, so that’s reason enough to have her on this concert film. It also should be noted that the Jonas Brothers’ bodyguard, “Big Rob” Feggans, is also always present to watch over the brothers. He even raps on “Burnin’ Up”.

Unlike Miley’s music, though, The Jonas Brothers’ music is purely “bubblegum” pop stuff. There is a little bit of rock infused to make things seem edgy, but these guys are no rockers. The majority of their songs deal with teen romance or teen angst. These brothers do have talent, but you really couldn’t tell from the songs given here. Some are catchy and they are all listenable, but one song seems to just run into the next. There is nothing here that memorable, and nothing to separate it from all the other songs on the pop scene today.

You really have to be of a certain age to enjoy Jonas Brothers: The 3D Concert Experience. This is more like a subpar version of last year’s Hannah Montana & Miley Cyrus: The Best of Both Worlds. Just insert the Jonas Brothers and away you go. The Jonas Brothers are likable enough, but the “behind-the-scenes” footage doesn’t really give much insight into the real lives of these brothers. The Jonas Brothers certainly don’t have the mass appeal that the Beatles had, and even what Miley Cyrus somewhat has now. So the bottom line is this: if you are in that key 6-18 female demographic, you will probably be entertained by this concert film. But as far as concert films go, this one is near the bottom of them all. Stay away if you are over the age of 25. Although, it’s quite a sight at the end, seeing the Jonas Brothers shoot gallons of white “party” foam onto their girl fans from hoses on stage.

There are two total different video presentations for this concert film. There is the standard high-definition version, where the video is presented in 1080p/AVC MPEG-4 at the 1.85:1 anamorphic widescreen color ratio, which is enhanced for 16:9 TVs of course. The transfer is fantastic with no major problems at all. The colors are vibrant and there is great detail everywhere with the exception of some of the backstage stuff.

The other version of this film is in the traditional “anaglyph” red/blue process. Four pairs of your standard paper/plastic 3-D glasses are provided. However, only the usual “forced” 3-D camera tricks are used here, which means guitar picks, drumsticks, fingers, guitars, microphones, mic stands, etc. get thrown into your face at times during the performances. Overall, it does get a little tiring on the eyes but at least it does enough things good to justify it being added to the Blu-ray.

The audio included is available in either English 7.1 DTS-HD Master Audio sound or Spanish Dolby Digital 5.1 surround sound. There are subtitles available in English, French, Spanish as well. This film sounds outstanding. But it’s really sound, since they pretty much used the same video and audio setup they used for Hannah Montana & Miley Cyrus: The Best of Both Worlds. No problems here either, though.

The option to view this concert film in 3-D is the only extra that is added to the Blu-ray version. That is if you don’t count the extended commercial for Blu-ray from the stars of “The Suite Life on Deck”. I don’t count that as an extra, since you can find it on other recent Disney Blu-ray DVD releases, and probably will continue to see it more and more. The 3D version of the film is really nothing but the usual 3D gimmicks, so take that as it is.

“Up Close & Personal” Featurette –
This runs 15 minutes and it’s your standard “behind-the-scenes” featurette on the creation of the “Burnin’ Up Tour.” The backstage glimpses are not just from these particular performances, but from other concerts part of the “Burnin’ Up Tour.” We see rehearsals, fan interactions, and even a last-minute mishap. Nothing too insightful, but fans will certainly love more “behind-the-scenes” footage.

Bonus Songs –
Two songs that are not in the main feature are included here. They are “Love Bug” and “Shelf”. They probably got cut from the main feature, because the didn’t “look” as good as others. But they go right along with the other songs in the film, so fan should be sure to check these out.

This is the best version of this film without a doubt. The 3D version is probably not worth the extra cost for most people, since you get nothing really new in that department, as far a 3D tricks go. But the regular high-definition version of this film is the best audio and video you can get. Despite it being pretty much a copy of Hannah Montana & Miley Cyrus: The Best of Both Worlds, Miley’s concert film is a lot better than the Jonas Brothers.

Jonas Brothers: The 3D Concert Experience is not recommended viewing for anyone except the tween and early teen market. This is really only all or nothing. If you are a fan, you will buy this film. You can probably get by with just getting the standard Deluxe edition DVD.