Gerry Conway is currently writing The Last Days of Animal Man due out form DC in May with Chris Batista. Gerry also co-created the Punisher and Firestorm the Nuclear Man and has written just about every title over his career including the best team book ever written (my opinion) Justice League of America #200!

1. You have written so many comics I love..just wanted to get that out of the way. Did you always want to work in comics?

I started writing and drawing my own comics when I was ten or eleven years old, soon after reading Fantastic Four No. 4, so I guess, yes, I always wanted to write comics.

2. Who were some creators who inspired you to write?

Stan Lee and Gardner Fox were my earliest inspirations in comics; Robert Heinlein was a science fiction writer I admired from an early age.

3. You scripted one of the best known Spider-man stories, the Death of Gwen Stacy, what are you thoughts on that now looking back?

Oh, gosh. I’ve talked about this so much elsewhere. At the time, it was just a story, and I tried to write it as well as I could. Looking back, it’s pretty clear to me it was a turning point in comics, a demarcation line of sorts. But it wasn’t intended to be that way.

4. How do you feel about the recent Brand New Day event that reset Spidey continuity and “Mephisted” his marriage away?

Well, it sounds like they wrote themselves into a corner, by marrying Peter and Mary Jane, and had to get themselves out of it somehow. I expect one day we’ll see the same thing happen with Superman. These things are bad ideas, generally. Robin never marries Marion; Tristan doesn’t get Isolode; Romeo and Juliet don’t live happily ever after. Romances in serial fiction should never reach the natural climax; when they do, they cease to be romances and become something else that may or may not be useful for a character.

5. Continuity seemed pretty important growing up reading comics, has that changed? or am I just imagining it?

Comics are a niche market in print, but a major cultural touchstone in other ways. The actual comic book has less and less relevance as such, but the creations the comics produce are more and more important, outside the actual publications.

6. How did you come up with the Punisher?

I needed a secondary villain for a continuing storyline I was developing with the Jackal. I honestly thought he’d be a one-shot, throwaway character, patterned after some popular vigilante-style anti-heroes that were around at the time. In the writing, though, he became something more.

7. When you and Ross Andru came up with him…did you imagine he would be as popular as he has become?

I haven’t seen any of the Punisher films. Don’t want to salt the wound.

9. You wrote the first official DC/Marvel crossover Superman vs the Amazing Spiderman, which I still own and love, how did you get involved with that?

When I went over to DC after several years at Marvel, DC’s publisher, Carmine Infantino, saw me as a “catch” and wanted to use me on a high profile project. He and Stan Lee had just agreed to the first cross-company project, and under the terms of their agreement, DC got to pick the writer and Marvel got to pick the artist. I was jazzed to get the assignment, as a fan and as a writer. 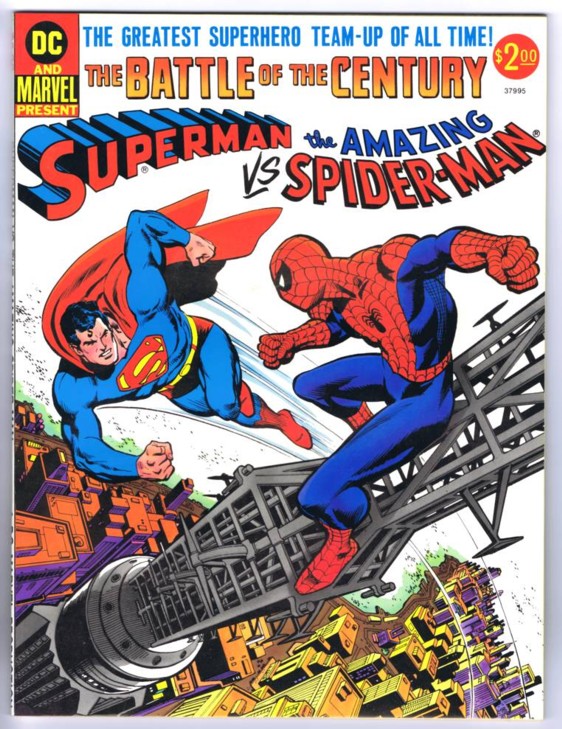 10. You created Firestorm too!! Wow, another long time fave of mine. How did you come up with the Nuclear man?

I wanted to create a superhero who was just an “ordinary” kid — not a brain like Peter Parker, just a regular teen. I’d played around with flaming characters before (“Firelord” in Thor comes to mind) and wanted to do something similar. I also liked the idea of updating the Captain Marvel “Shazam” shtick — and then there was the notion of giving Firestorm a secondary personality in Professor Stein, who’d comment on what Ronnie was trying to do, etc. Just wanted to have fun.

11. You have done a lot of writing work, how does writing for the small screen, novels, or big screen compare to your love of comics?

Well, I seem to have far more freedom to do what I want in comics than I ever had writing in film or television. Writing novels is also liberating, but it requires far more concentration and commitment than I seem capable of producing these days.

12. Fire and Ice too!, I loved that, I was a rabid Dungeons and Dragons nut, that’s a cult hit, do you think it stands up today?

Haven’t seen it in twenty years, so I have no idea. I wasn’t that happy with the final product at the time, though.

13. What about Conan the destroyer?
Same.
14. Looking back at your work in comics what would you say is the work you are the most proud of?

My run on Spider-Man, my run on Batman and Detective, and my run on JLA.

15. You have the Last Days of Animal Man coming out this May, how did you get involved with the project?
I pitched an idea to Joey Cavalieri about a hero reaching the end of his time as a super-powered being, and coming to terms with that. Joey suggested Animal Man as the hero, and we set the story in the future so it wouldn’t interfere with regular DC continuity.
16. Can you tell us a little about the story?
It’ll be out this month, buy it and see for yourself! Hehe.
17. Will there be any thing in it from the Vertigo Animal Man series?

I touch on some elements from that series, but this is intended as a straight-forward story, not a story about a story.

18. Are you providing fully scripted Animal Man plots for Chris to draw?

19. Brian Bolland is doing beautiful cover work (as he did on the Vertigo series), do you provide input for the cover designs?
I do.

20. Will $3.99 comics be the end of the monthly floppy?
Beats me; I thought 25 cents was more than kids should pay, and we passed that marker lonnnnnng ago.
21. Will the digital format be comics savior?
Your guess is as good as mine.
22. Any advice you for aspiring comic creators?
Don’t take no for an answer.

23. What is next for Gerry Conway?
I’ll let you know when I know!
24. This isn’t a question but you have also worked on some of my favorite show..I heart you!!!

Make sure to pick up the Final Day for Animal Man from DC due out on May 27th. And thanks Gerry you really have written some of the comics that have kept me a fan of capes all these years.
—————————
Chris Batista has been drawing comics professionally for 15 years. His pencils have been seen in Steel, Spaceknights, Legion, 52, Robin and is currently working on Last Days of Animal Man with Gerry Conway due out in May from DC comics. 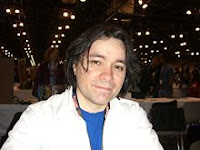 1. Do you think that black book full of Star Wars and G-Force drawings will ever resurface?
I will never see that sketchbook again. I wasn’t even a professional at the time. Why the hell would you steal a non pro’s sketchbook. Bastard…


2. When did you start drawing?

I’ve been drawing far as long as I can remember.

3. How did you break into comics?

I took a course taught by Klaus Janson at SVA. He got me an interview at Marvel and I got an 8 page X-factor script.

4. Have you ever been intimidated by some one you thought was a better artist?

The list is way too long for those artists that intimidate me.

Very Scary. My first series. I was still very raw and didn’t know a damn thing about how tough it is do a series. You gotta start somewhere.

6. Do you think most fans understand the work it takes to finish a fully penciled comic page?
I think some do realize what it takes but most don’t have a clue what it takes. Whatever is needed, the artist must provide. Trips to the library, endless hours on Google.

7. How long does the average page take you?
Every page takes it’s own amount of time. Some go very fast while others can be so damn slow. Crowd scenes can be a drag if you’re not drawing the same person over and over.

8. What do you think about comics that ship late?
It’s a harsh reality. Sometimes it’s for a good reason. Look at Bryan Hitch. The amount of effort is clear. Other times, not so much.

9. I am big Rom fan, looking back what do you think about the Spaceknights series?

Spaceknights broke my heart. My original pitch was very dense and heavily Sci Fi. I wasn’t allowed to write it and they weren’t going to give me my choice of writers (DnA). The writer that was chosen just didn’t get what I was going for. It came across as very corny and dated. I wanted badass aliens and advanced alien cultures. I wanted to push the envelope. I was crushed every time a script came in.

10. If you weren’t drawing comics you would be?

An actor or a prostitute. Kinda the same thing I guess. There is also a career at Burger King waiting.

I would have to get in line after Alex Ross.

12. Who is your favorite member of G-force?

Toss up between Mark and Jason.

He was special and would f@#% you up.

14. Who are some influences on your work?

Jerry Ordway, Michael Golden, Alan Davis, Yasuomi Umetsu, Kevin Maguire and many others. These are the main ones.

15. What made you finally ditch the shades?

My work with the government was finally done and I could just be a civilian.

16. You have done some great work over the last 15 years or so. What run or work stands out in your mind as your favorite (For me it’s Legion )?

It would have to be Legion as well.

17. You are working on Animal man, when is that coming out?

First issue hits in may.

18. Can you tell us anything about the project?

It’s set 15 years in the future and Buddy is losing his powers. Then denial sets in. Gerry Conway will be writing.

19. How are your pages coming along?

Not as fast As I would like. I’ve been very nitpicky lately. I need to pick up speed like I’ve done in the past.

Maybe some Booster Gold. The editor and I have been talking over some ideas.

21. Who are some characters you would really love to get your hands on?

22. Do you want to take a stab at a creator owned project?

I would really love to at some point.

23. Do you remember Digger bringing a machete to School of Visual Arts?

Love that that Digger.

24. Why do you think inkers and colorists are “unsung heroes”?

They are certainly not as recognized as they should be. I’ve got the amazing Dave Meikis on Animal Man. I’ve also had the awesome Cam Smith who’s now slumming on Bryan Hitch.

Yes and no. The standards were certainly higher in terms of what was expected form an artist. Some of those old stories don’t age very well. Some are just plain timeless…..Micronauts 1-12 anyone?

27. Any advice for aspiring comic artists?

Do your research. The more real your world is, the better your characters are going to look. It ain’t fun but it’s very necessary.