I’m right on the fence with how the Summer Movie season is going at the moment. Sure, last week’s report card had a lot of good marks on it, and movies like Star Trek and Up have absolutely floored me with how good they were, but there’s also been a big share of disappointments, and it’s hard not to get depressed when a movie like Transformers: Revenge of the Fallen is coming close to breaking a lot of records set by The Dark Knight a year ago, when that movie legitimately deserved it’s ridiculous amount of success.

Still, it’s not all bad, and I think when it comes down to it, with movies like Red Cliff II and others supplementing my summer schedule, as well as geeky fair like the new Harry Potter and Inglourious Basterds there’s still plenty of fun to be had, even if G.I. Joe: The Rise of Cobra and Halloween II end up as bad as they look in the trailers we’ve seen so far. Still, if you’re not finding the type of fun you’d expect from your local cineplex at this time of year, I’ve found a recent alternative that manages to bring the awesome, without having to push a three hour running time or make you sit through what passes for humor.

Now, finding this movie on your own may take some doing, because more than likely they’re not going to be at your local theater, but with some creativity you should be able to get a hold of your own copies. Have you ever gotten obsessed or just really gotten into a group of movies, but as you progressed through the series, you’re ultimately a little disappointed because the first one you saw was the best of the whole group? I can probably say that personally this has happened to me on a couple of occasions throughout my time as a film junkie, and I think especially you run this risk if you take in the works of different action stars. For example, if you start with Lone Wolf McQuade or Code of Silence with Chuck Norris or Under Siege or Out for Justice with Seagal, those are pretty much as good as it gets with them, and if you go through their careers looking for a bigger highlight, you’re just not going to find it.

I think most prominently though, this happened to me with the films of Jet Li. Like most fans of Hong Kong cinema, Li’s contribution to Hong Kong cinema is a very important one because it represents one of the true successors, along with Jackie Chan and to some degree Donnie Yen, to the work of Bruce Lee, probably the most important star in Hong Kong cinema history. Now I consider myself pretty knowledgeable when it comes to Li’s work, having exhausted every DVD and import I’ve been able to get my hands on for the last decade, but unfortunately, nothing for me has ever topped that first time I sat down and watched Fist of Legend. Wowing me with its grace and brutality, Fist of Legend set a standard that I really try to match when watching any Martial Arts, not just Li’s films, and unfortunately, most other fight flicks, especially those of Li’s, don’t come anywhere close. Thankfully, that doesn’t seem to be the case with the man who I consider the successor to Li, Tony Jaa. Now, while Jaa is from Thailand and not Chinese like most of his brethren in Martial Arts cinema, no star has stood out when it comes to this genre in the way that Jaa has since the heyday of films like Fist of Legend, Drunken Master II and Iron Monkey. Now while the man had had roles in lesser films, Jaa really burst on the scene with Ong Bak: Thai Warrior, which showed the star taking a pretty standard premise and making it something spectacular. He’s not De Niro here or anything, but what he brings is some pretty legit charisma, and absolute legitimacy when it came to the movie’s action.

Like old school Jackie Chan, Jaa’s incredible physical prowess sold the movie because the stunts he performed, like jumping through a ring of barbed wire or fighting with his legs caught on fire, actually happened in front of the camera. Not only that, his fighting chops also showed a brutality and physicality that we really haven’t seen since Bruce Lee’s heyday, and that goes for the best of Jet Li’s work. Basically combining Jackie Chan’s athleticism with Jet Li’s grace and technique, Jaa showed up a force to be reckoned with.

Unfortunately Jaa’s next film, The Protector, while still being able to showcase Jaa’s talents, was very much the same movie on a lot of levels. With a goofy plot featuring Jaa searching Bangkok in order to find two missing elephants, the movie was just a clothesline with which to hang on a series of incredible stunt sequences, and I do mean incredible, especially a one take sequence that featured Jaa going from floor to floor in one building, destroying every opponent in his path. Still, even with this type of innovation, the movie was a bit of a failure in America critically and financially. I do wonder if the movie would have been better received if the Weinstein Company, who cut 30 minutes from the movie and gave it a rap soundtrack, had not distributed the movie. While the original edit did end up on DVD, movies such as Crouching Tiger, Hidden Dragon and Kung Fu Hustle got better treatment with Sony Picture Classics, who may have done the movie more justice upon its release.

Even with seeing these first two major turns by Jaa, I’m not sure that anything could have really prepared me for Ong Bak 2. Now, I will say that in no way is Ong Bak 2 really related to the first movie at all, other than the fact that Tony Jaa is in the movie and that he does insane things on screen. Then again, insanity seems to be the name of the game when it comes to this film.

While the first two movies were your standard Kung fu flick romps set in modern day Bangkok, this new film feels like something more akin to Apocalypse Now or Apocalypto, with Jaa stepping into the shoes of director for the first time on this movie. He apparently got so into the picture that it went vastly over-schedule and over-budget, causing Jaa to have a nervous breakdown on set, wander into the jungle to find himself for a few months, and then return to make demands from backers (of which did include The Weinstein Company, which pulled all funding), before finishing his epic picture. Thankfully, as with Apocalypse Now or Apocalypto the finished product is a movie that seems to completely deliver on what it intended to do. 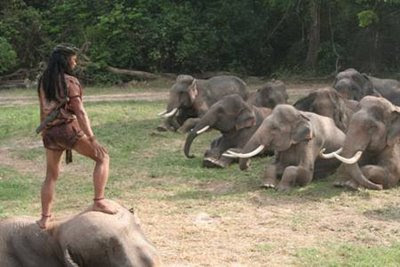 How crazy does the action get? Well, first of all picture that this is a film made in Thailand, so things like CGI and effects in general are pretty scarce. Now picture a film that takes place in the 15th Century, with various factions vying for supremacy in the country and a young teenage prince who gets captured and sold into slavery while trying to escaping from a deadly coup. Forced to prove himself in combat, his new masters throw him into a pit with crocodiles where he has to fight for his life.

This is all in the first ten minutes of the movie.

Now, again take into account that this movie was made for about 8 million dollars, so this was most assuredly a real crocodile. Next, if you’ve seen the trailer, you can see that this indeed looks like a real croc, but not only that, the actor in the scene fighting the animal isn’t Tony Jaa at all, but Natdanai Kongthong, the boy portraying the young version of Jaa’s character Tien. So this teenager and real crocodile go at it for a while, when Tien’s captors are slaughtered by this band of pirates (aka: a group of bad ass martial artists with varying styles from samurai and Samoan warrior to a guy that kills people with magic tricks), who happen to see Tien fighting and think that he’ll do just fine and grow up to be the greatest of all their warriors. 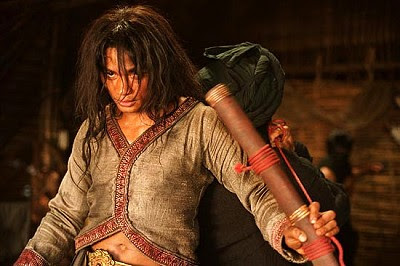 So the storytelling here has jumped up a level from stereotypical modern action flick to a more classic “chosen one” type story, with Tien training to become this ultimate warrior, complete with trials including fights against a herd of elephants, various warrior classes and styles, and then finally having to defeat some sort of vampire witch as his ultimate test (you read that right). Upon fulfilling these rites of passage, we see Tien in his group in full force, taking down other pirates with ferocity and then finding the remaining members of the group that enslaved the former prince and watching Jaa’s character slaughter them single handedly in a jaw-dropping sequence in which he kills most of them without even standing up. While I don’t want to reveal too much of the plot after this point, I will say that the finale for the movie again involves elephants and vampires, as well as a giant army of ninjas which Tien must face all on his lonesome.

I doubt an action movie that comes out all year will satisfy you the way that this one does. Jaa again does amazing feats, and I love that in this movie he is not confined to just using Muay Thai moves as he has previously, but does an incredible array of fight choreography, including kendo, shaolin, Polynesian, and other forms. The movie is a roaring river of flying fists, high knees and clashing swords on a level I have not seen in a long time, if ever.

There’s a podcast I listen to called “The Totally Rad Show” where they talk about various pop culture items and review a wide array of movies, games and comics. Well, recently one of the hosts of the show, Dan Trachtenberg, talked about the new trailer for M. Night Shyamalan’s latest film, The Last Airbender, which will adapt the long running animated show, and he claimed that he thought the movie would be the definitive Martial Arts film of the decade. While I think that particular spot in the genre has already been filled with either Crouching Tiger, Hidden Dragon or Kill Bill, and concede that Airbender will probably be a better written movie than Ong Bak 2, I doubt seriously that the movie will be able to go toe to toe with Jaa’s epic in terms of ferocity or visceral impact.

In short, I think Ong Bak 2 is a major achievement for Tony Jaa, who establishes himself as probably the most relevant voice in Martial Arts cinema at the moment. A movie that goes out of its way to endlessly entertain you and wow you with its incredible physical feats, the film has more thrills than 20 Transformers films with only a fraction of the price. While not as polished as some of the great films that have preceded him in the genre, Jaa seems on his way to legendary status and will undoubtedly end up along names like Lee, Li, and Chan.