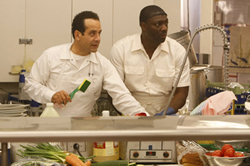 After last week’s mostly comedic episode, Monk has a more dramatic offering this week with “Mr. Monk and the Foreign Man”. Yes, there are some laugh-out-loud moments as Monk helps his new friend to adapt to “American” culture (which is actually Monk culture), but primarily the story serves to reawaken Monk’s hope that he can still solve Trudy’s murder and also to reconnect him with memories of Trudy that he fears, after 12 years, have begun to fade.

The role of the foreign man is played by Adewale Akinnuoye-Agbaje, best known as Mr. Eko on Lost. He is not well known for comedic parts, but for a more serious episode like this he brings just the right amount of gravity. He also turns out to be quite a good straight man.

Promo ads for the episode announce that he’ll get “one step closer” to solving Trudy’s murder. Like most promos that’s an exaggeration, but at least this episode does bring the series’ main mystery back in the theater if not all the way to center stage and they will have built a little bit towards the conclusion when they actually get around to solving the murder in the final episodes of the season.

The episode opens at the Pine Street Corner Store where a beautiful young woman from Nigeria shops as the clerk flirts with her. He learns she’s a married woman visiting San Francisco for one week. As they talk a speeding van careens down a street and a vodka bottle rolls around on the dash board. We don’t see the driver.

The woman leaves the store and after making a call to her husband in Nigeria she waits for the light to change. She steps into the street and is run down by the vodka drinking driver of the speeding van. He keeps on driving.

Two weeks later Monk and Natalie are at his apartment when he smells a strange odor coming from outside. He sees an African man sitting in front of the Pine Street Corner Store, lighting candles and incense. Monk mistakes him for a hippie and from his window angrily advises him to move along. He thinks about calling the cops, but Natalie tells him there’s no need. The cops just called. They have a case. Monk’s glad to get away from the smell. That is until they arrive at the 12 day old crime scene.

Maria Fuentes. John and Carolyn Buxton’s housekeeper, was killed the after they left for a Barbados vacation two weeks earlier. Upon their return they discovered her corpse. It’s pretty ripe. Disher pretends to be impervious to the smell for the benefit of a pretty CSI tech. Stottlemeyer, who genuinely seems impervious, goes over the crime scene with them. Besides the earring which Monk finds in the victims pocket, there is a cell phone and a first aid handbook on the kitchen counter. Natalie suggests the killer felt guilty and was trying to help the victim, but the blood on the book indicates that it was open before the victim was struck.

That night as Monk tries to sleep at 7:45pm, a flute plays a haunting melody across the street. In his bathrobe and slippers Monk goes to confront the flute player. He offers the man five dollars to move along. “I can not leave,” the man tells him. My wife was killed here. This is sacred ground.”

Monk is immediately empathetic. That’s exactly how he felt about the garage where Trudy was killed. Monk takes the man to his apartment and tells him to make himself comfortable. The man’s name is Samuel Waingaya and he’s there because his wife, Ansara, was the one killed by the hit and run driver. He has some evidence, tire tracks and headlight glass, but the police have told him they’re already doing all they can.

When Samuel lights up, Monk provides him with a smoking bag (a green garbage bag) that he advises him to breathe into. The smoking bag is the first of many “American” innovations Monk will introduce Samuel too. When he starts to leave Monk tells him, “I’m a police detective. I’m very good at it.”

He wants to help him track down Ansara’s killer. Samuel wants to know why and Monk shows him the scrapbook filled with articles and evidence on Trudy’s killing. When Samuel understands that Monk’s wife was murdered he reaches out to comfort Monk and places a hand on his shoulder. Knowing he has found someone who understands his pain Monk does the same.

The next day in Stottlemeyer’s office, he shows Monk and Samuel the security footage from a gas station near the corner where Ansara was killed. They spot the van with the broken headlight. After Samuel is gone the captain warns Monk that the hit-and-run case is cold and he shouldn’t be getting Samuel’s hopes up. When Monk says, “He lost his wife, Leland. They ran Trudy over and then just kept on driving.” Stottlemeyer realizes Monk is identifying the case with Trudy’s murder. Monk is concentrating on the video and he doesn’t notice his mistake. Then on the video he sees the same van again going the opposite direction

Monk, Natalie and Samuel move on to the gas station to find witnesses. Trying to explain why the driver turned around, Natalie mentions again that the killer might have felt guilty. Luckily for them the gas station comes equipped with a couple of slackers, one of whom saw the hit and run driver go towards the tunnel and turn around. He also saw the word “poison” on the side of the van.

In an almost purely comic scene, Monk shows Samuel the “American” way to do Laundry which involves using all the washers, washing right and left socks separately, $200 and a pre-wash cleansing cycling. It also leads Samuel to discovering a vital clue. A picture of a fisherman on the wall makes Samuel thing the “poison” could be “poisson” French for fish. They follow the clue to Kenneth Nichols’ restaurant Le Poisson Bleu, where they quickly determine, after finding a grain of rice stuck in the car’s grill, that Nichol’s is the guy.

Later, back in front of the corner store Monk is placing flowers in honor of Ansara, when Stottlemeyer shows up. He mentions that it’s been 12 years since Trudy and concludes that Monk is fixating on this case because he’s frustrated over not being able to solve Trudy’s murder. Monk denies it and tells him that Nichol’s is a good suspect in Ansara’s death. Stottlemeyer wants more evidence than rice. He tells Monk he’ll look into it and makes him promise to think before he does anything stupid like going undercover in Nichols’ restaurant.

That, of course, is exactly Monk does. He and Samuel go undercover as dishwashers at La Possion Blue, but Monk’s so picky that they only manage to clean one knife and one fork, American style. They discover that Nichols buys fish from a market on Vinton Street near the wharf every Tuesday, which would put him only a few blocks from the hit and run site on that day. When Monk sees the Buxton’s, whose maid was brutally murdered the same day, in the dining room, he thinks there’s a connection. He poses as a waiter to interview them in the dining room and finds out Nichols is a close friend of theirs. He returns to the kitchen and tells Samuel that he’s figured it out, but unfortunately Nichols has figured out what they’re up to and pulls a gun on them.

Nichols throws them in the back of the van with all the fish and drives over the Golden Gate Bridge, presumably to dispose of them in a more secluded place. Monk is handling all the stress and the smell unwell. “Sometimes you are like a big, crying infant,” Samuel tells him. He tries to calm Monk down by asking him to recount the “here’s-what-happened.”

Nichols had been drinking and driving when he decided to drunk-dial his friend Buxton who had already left for Barbados. The housekeeper, Maria, answered the cell phone her employer had left behind. Nichols was talking to her when he ran down Ansara. Since Maria now knew too much, he kept her on the line, pretending to help the accident victim, when in fact he was driving to the Buxton’s to kill her.

Monk and Samuel feel the van turn off the road. Monk is convinced they will soon be killed. Samuel tries to give him courage, reminding him that their wives would want them to go on. “This is your final lesson” Monk says with a look of determination on his face which implies he’s about to man-up when in fact he’s going to do no such thing. “This is how we do things in America. We cry a lot. We confuse our dead wife and other people’s dead wives and then we give up.”

Well, that’s not the way Samuel rolls and he has an idea. He has Monk take the lighter from his pocket and burn the rope from his hands. The van stops and Nichols takes a moment to imbibe a little liquid courage. When he opens the van doors Monk and Samuel push a wall of fish onto him. Samuel subdues the killer and pulls out a picture of Ansara, demanding that Nichols say her name in effect admitting that this is the woman he killed. Monk then gets a picture of Trudy from his wallet and makes Nichols say her name, which he does even though he’s very confused. Monk is desperate to have someone take responsibility for Trudy’s death.

In the final good bye scene, as Samuel prepares to get in a cab and leave, Monk wants to know, “What’s it like?”

“Knowing is everything, but your turn will come Adrian Monk. You are next. Do not give up.”

So while he may be no closer to evidence or witnesses or forensics that can help him solve Trudy’s murder, his determination to find her killer has been renewed which you could say is “a step closer.”

Next time: Mr. Monk and the UFO.