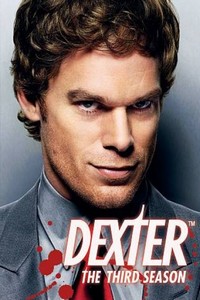 Dexter Morgan (Michael C. Hall, Six Feet Under, Gamer) is a upstanding citizen of Miami. He works for the Miami Metro Police Department as a blood spatter analyst and is an integral part of solving some of the most extreme homicide cases. He’s got a sweet, soft -voiced girlfriend named Rita (Julie Benz, Rambo, Saw V) who is a single mother of two school-aged children and he’s stepped up to the plate as their father figure. He’s also very close with his sister Deb (Jennifer Carpenter, Quarantine, The Exorcism of Emily Rose), the only family he has left. But he does have a very dark secret that none of them know. He’s a serial killer.

Season One of Dexter focused on the Ice Truck Killer, a serial killer in Miami who leaves clues for Dexter insinuating that he knows his secret. Then the Ice Truck Killer became romantically involved with someone close to Dexter leading to the season’s climactic ending. Season Two had Rita becoming suspicious of Dexter’s strange behavior, so he falsely admitted to a drug problem. He joined NA and found a sponsor in the form of a beautiful British woman named Lila. Dexter’s personal life begins spiraling out of control just as the Miami Police Department begins investigating a killer nicknamed the Bay Harbor Butcher, and they start pulling bodies out of the bay…all of the bodies of Dexter’s victims.

Season Three dives even deeper into the world of Dexter Morgan. With the Bay Harbor Butcher case out of the way and Lila out of the picture, Dexter has the time to focus on his relationship with Rita. He becomes even more influential in her kid’s lives, and he and Rita decide to take their relationship to the next level.

Dexter never thought he would be like a normal person, but this season has him establishing a stable home life, and gaining the trust of a new friend: well-respected Assistant District Attorney Miguel Prado (special guest star Jimmy Smits, NYPD Blue, My Family/Mi Familia). Miguel has a dark secret of his own and the two develop a no holds barred friendship that builds over the course of the season. The two are perfect friends. Dexter rids Miami of the killers who have gotten away with their crimes, and Miguel wants justice as well. But Miguel doesn’t agree with the Code of Harry – the rules by which Dexter abides, given to him by his police officer adopted father – and that doesn’t agree with Dexter.

The Dexter TV series is based on a series of books by Jeff Lindsay – the first season following the same basic storyline as the first book, Darkly Dreaming Dexter. While Lindsay’s concept is inventive, the Showtime series has really given the characters more development, making them more engaging. Each new season has built upon the season before and taken Dexter’s world to a new, nail-biting level and Season Three is no different. Season Four of Dexter premieres on Showtime on September 27, 2009 and is sure to expand the Dexter world even further making it more and more difficult to keep his dark secret hidden.

Presented in a 2.35:1 aspect ratio with Dolby surround sound. This is a very high quality DVD transfer.

Win A Trip to the Cook Islands – Yes, really. The contest is accessible through the DVD-ROM features.

Michael C. Hall Interview – This is an interview with Michael C. Hall, but the interviewer asks questions directly related to the plot of Season 2. Why include this here? In addition to the Michael C. Hall interview, there are also interviews with Erik King Doakes from Lauren Velez.

Academy of Blood featurette – Now this is what should have been on the actual DVD itself. This featurette is of a real forensic expert talking about the importance of blood spatter analysis to homicide cases.

With a series as compelling as Dexter, fans will be let down by the lack of bonus features that have been included with this DVD release. Commentary by the stars, Jeff Lindsay, or any of the directors would have been a welcome addition. The season itself however is inventive enough to make up for the disappointing extras, so for fans, Dexter: The Complete Third Season would be a required addition to the collection.