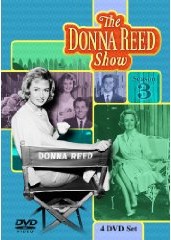 There’s a scary start to The Donna Reed Show: Season 3. Before Jason Voorhees rose from his watery grave, Donna Reed visited Crystal Lake for the nightmarish “Weekend” episode. What lured America’s most independent mom and her husband up to a camp twenty years before it would be immortalized as the site of a grizzly counselor massacre? She craved a romantic weekend with her husband (Carl Betz) without the kids (Shelley Fabares and Paul Peterson). The kids aren’t the only ones missing from this rustic location. Donna and her husband noticed fellow campers disappearing.

Maybe the episode isn’t that gruesome or foreshadowing of the Friday the 13th movie franchise. Turns out the place is a dump run by a well meaning elderly couple. The wife can’t really cook. The husband’s old bones can’t manage the upkeep. They going broke and may have to default on the property. Leave it to the Stone family to find a solution for this ailing camp. However little would they know their work at Crystal Lake would lead to hundreds of people slaughtered by an undead beast in a hockey mask. The other 37 episodes aren’t so ironic.

“The Mystery Woman” has Donna bump into a semi-familiar face. The woman remembers her from 13 years back. Donna hasn’t a clue, but plays along. Naturally this not knowing, but too polite to ask moment drives Donna to snoop around to find the real identity of the mystery woman. For fans who have been hankering for Dennis the Menace to come out on DVD, there’s a little taste on “Donna Decorates.” She wants to fix up the house, but neighbor Dennis Mitchell (Jay North) keeps giving an unwanted hand. She has to get help from Mr. Wilson (Joseph Kearns). “The Love Letter” has Paul assist a Greek handyman in writing a love letter. Shelley finds the letter and thinks her brother now has a lover. “How the Other Side Lives’ has Donna wanting to impress a rich house guest. How can she compete without the extravagances of a staff, pool and behaved children? Of course she can always get her friend drunk so she can’t remember the weekend or her house. “Never Marry a Doctor” has Donna fearing her clean lady’s husband is stealing. Who could swipe money from Donna? “Someone is Watching” has the bonus feature of the original Christmas greeting from Donna and the family.

“The Model Daughter” lets Shelley win a scholarship to learn how to be the first Janice Dickinson. The award doesn’t cover all the expenses and very quickly the costs rack up. But think of the money they save by not feeding Shelley as she goes Twiggy. “The Lean and Hungry Look” also involves starvation. Donna has to lose wait to fit into a dinner dress. Hubby is tight in his tux. It’s a family-style workout so there’s no wardrobe malfunctions. “World’s Greatest Entertainer” shows what happens when you are too nice in praise. Donna’s son thinks he’s an amazing impressionist when the family swears they think he’s James Cagney. He enters the school talent show thinking the trophy is his to lose. “The Stones Go to Hollywood” has the family arrive in the land of dreams in search of superstars. Who makes a cameo? No hints from me. “Mary’s Heart Throb” makes her fall for a college drop out that dreams of joining the French Foreign Legion. “The Merry Month of April” reminds us why it’s good for a family to have a professional do your taxes. “Military School” lets Shelley fall for another boy in uniform with army aspirations.

Donna Reed remains one of the great sitcom housewives because she took the lead in the house while her husband focused on being a doctor. Naturally she’s still a bit clueless when it comes to what the kids really wanted to do in 1960. She can’t be too perfect. The kids are firmly in the role of teenagers. The stories don’t try to make them act too ideal or bland. Donna might not have done things right the first time, but she worked hard to make things work right for everyone. The Donna Reed Show: Season 3 reminds us why she was the original super wife.

The Episodes
“Weekend,” “The Mystery Woman,” “Donna Decorates,” “The Love Letter,” “How the Other Side Lives,” “Alex’s Twin,” “Worried Anyone?,” “Higher Learning,” “Never Marry a Doctor,” “It Only Hurts When I Laugh,” “The Model Daughter,” “Decisions, Decisions, Decisions,” “Donna Goes to a Reunion,” “Someone is Watching,” “The Lean and Hungry Look,” “Character Building,” “World’s Greatest Entertainer,” “Variations On a Theme,” “The Stones Go to Hollywood,” “Donna Directs a Play,” “Trip to Nowhere,” “The Geisha Girl,” “The Busy People,” “Tony Martin Visits,” “Aunt Belle’s Earrings,” “Poodle Parlor,” “Mary’s Heart Throb,” “Donna’s Helping Hand,” “The Merry Month of April,” “Music Hath Charms,” “Let’s Look at Love,” “For Better or Worse,” “Jeff, the Treasurer,” “The Good Guys and the Bad Guys,” “Military School,” “Mary’s Driving Lesson,” “The Mustache” and “Mary’s Little Lambs”

The video is 1.33:1 full frame, The black and white transfers look better than when it ran on TVLand. The audio is mono. The levels are fine enough so you can always make out Donna’s wit and wisdom. No subtitles.

Paul Petersen and Mary Owen Question & Answer (27:16) taped at Barnes and Noble in New York City. Mary Owen is Donna Reed’s real daughter. It’s interesting to hear this duo discuss growing up with Donna Reed as TV mom and actual mother. The audio is good for an off the camera’s boom mic recording.

Original Fan Letter to Donna Reed from a World War II Soldier is photos of the original handwritten pages. What became of Kenneth L. Mitchell after his time in the service?

The Donna Reed Show: Season 3 starts off on such a weirdness factor with the creaky camp next to Crystal Lake. But there’s nothing nightmarish about the 38 episodes. Donna Reed is just the most wonderful of wives, mothers and friends that it’s hard to believe she didn’t have three separate shows. The kids are having teenage problems without being treated with childish solutions. For a show from 1960, it’s not stuck in the attitudes of the past.