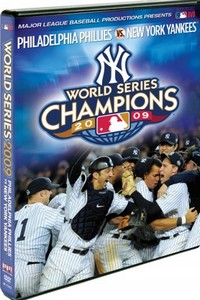 As sport documentaries go, there is NFL Films and everything else. This is MLB Productions attempt to break out of everything else and make a third category all to themselves. They’ll never be NFL Films, because NFL Films are just awesome.

The movie starts off going through the Yankees’ regular season, which as you might remember started off horribly. Weren’t those great times? Then A-Rod came back and hit the first pitch he saw into the Baltimore stands and it just went all downhill from there. And what do the Yankee’s point to as the series that turned their season around? A series against the Twins where the Yankee’s came back to win 3 times. I had blocked the memories from my mind, except for Mauer amazing play at the plate and then this DVD had to bring it back up.

After the movie is done destroying the mental health of Twins fans, they turn their attention to Boston fans. Boston owned the Yankees early in the year only to have the Yankees own the Red Sox in the second half of the year. It was after the Yanks swept the Sawks that the baseball world gave up and said the Yankees were winning the World Series. Which really, it’s only fair they won the World Series after throwing 200 million dollars at 3 players last offseason and yet, their payroll decreased from the year before. But still, it’s ridiculous how much money they spend. For example, A-Rod made 32 million dollars this year in base salary. The Florida Marlins entire payroll was 36 million. Terrible. I hate the Yankees.

Oh yeah, movie, after killing the Sox, they move onto the first round of the playoffs where they bring the Twins back in for another beating. Seriously, this is a HORRIBLE movie to watch as a Twins fan. It’s a good thing the Brad Childress extension killed my emotional hatred bearings or I might have snapped watching this. They then move on to show the Yankees cleaning up on the Angels in the ALCS.

After that, they jump over to the other league and spend a few minutes going over the Phillies season in much the same way. Except with the Phillies they focus more on the implosion of the bullpen rather than the actual winning the team did during the season. If you watched just that and had no idea how the season played out, you’d think they were one of the worst teams in the league.

After zipping through the Phil’s season, they move onto the World Series and go though it game by game. That’s where it basically turns into a highlight reel showing most of the scoring plays. If you want a deep look, and want to see the entire at bat’s leading up the scoring, you’re going to need the complete World Series DVD. This one will give you the big plays and give them to you from different angles and different looks, so it makes up for it.

Looks awesome. The city shots are fantastic and the game film is crisp and clear. The narration is good but not great.

Just a bunch of highlights taken pretty much out of the documentary itself.

The extras include A-Rod and Tex killing the Twins in game 2. A-Rod killing the Angels and the Yankees finishing off the Angels. A-Rod’s game 3 Homerun, Johnny Damon’s game 4 crucial AB, Damon’s heads up double steal, A-Rod’s crucial game 4 AB, and Matsui killing the Phils in game 6. And of course it’s all tied up with a nice bow having all the player reactions and the last 3 outs.

Really well done. One of the better sports documentaries to be put out this year. Still, only Yankee fans will enjoy this. If you have a Yankees fan on your holiday gift list, this is a great gift idea and compared to the full DVD set of the games, it’s reasonably priced as well. For everyone else it’s just horrible. Especially if you’re a Twins fan, since the Twins get absolutely destroyed by the Yankee’s numerous times on the DVD. Thanks for bringing up repressed memories. Damn Yankees…