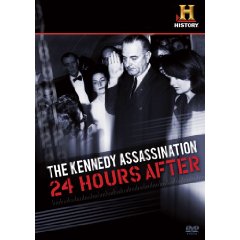 I find it remarkable that nearly fifty years after it happened we’re still discovering new information about the Kennedy assassination. I would have thought that after all these years, all the countless books, television specials, movies, and internet speculations that we had mined that particular moment in American history to death. But now, thanks to transcripts that were only recently made available to the public, we now have a more complete picture of what happened in the twenty-four hours following Kennedy’s murder.

There’s no smoking gun in this documentary, no tidbit of information pointing to a vast conspiracy or government cover up. What is here is the most detailed account of the fear and confusion that followed and the dangerous power vacuum where America may have been at its most vulnerable.

The last president to be assassinated was William McKinley in 1901, so the confusion following Kennedy’s shooting is understandable. No one knew what to do or who was in charge, and it didn’t help that the Secret Service and presidential aides almost immediately split into two factions: those who stayed with Kennedy, and those who took care of then Vice President Lyndon Johnson.

Johnson really is the focus of this documentary, and the picture you come away with is a bit muddy. At one time Johnson was the most powerful man in the United States, but when he became Kennedy’s VP he found himself without power, purpose, or a future. A deeply ambitious man, his actions after learning of Kennedy’s death can easily be viewed as either an opportunistic grab for power, or a Vice President scrambling to restore the chain of command in what could very well be the precursor to an invasion.

As much as some of the historians try to defend Johnson’s actions, he comes off—at least to me—as a callous power-grabber; but to be fair, the men in the Kennedy group come off as incredibly hostile. The tension between Kennedy and Johnson’s groups in retrospect feel petty and downright dangerous considering that the chain of command was essentially broken. If the assassination had really been the opening shot in an invasion, there was a good chance that the confusion and in-fighting might well have prevented the US from properly organizing a defense. This was an incredible moment in United States history, and this documentary is, by turns, fascinating and frightening.

The documentary is presented in Fullscreen with the audio in Dolby Digital Stereo. The filmmakers do a fine job of splicing together the disparate footage from home movies (including what I believe to be the cleanest version of the Zapruder film I’ve ever seen) and television coverage. There were no problems with either the audio or the video.

This is a fascinating look at an aspect of the Kennedy assassination that gets little coverage. It gives further insight into the highly complicated and contradictory Lyndon Johnson, and it also looks at the effect this had on Jackie Kennedy. Watching footage of her leaving the plane, still wearing her blood-spattered pink dress breaks your heart and helps put a human face to the tragedy, elevating this documentary beyond a chronicle of in-fighting and political maneuvering. While the lack of extra features and replay value keeps me from recommending buying this, it is definitely worth renting. Highly recommended.