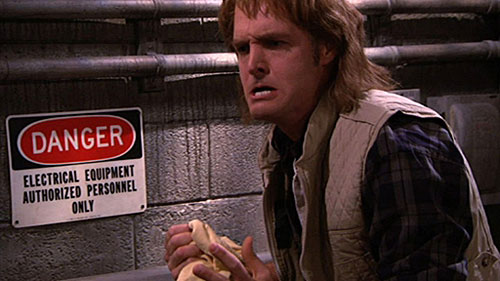 As a film fan and as a Texan, there are few things I get more excited about on a yearly basis then the South by Southwest (SXSW) Film Festival. While the SXSW’s Music festival may get a lot more of the attention from the hipster crowd, it’s SXSW’s annual celebration of film that gets my bathing suit area all a-flutter.

Taking place in Austin, TX, SXSW is an amazing way to spend nine days completely surrounded by fellow film freaks and packed into theaters to watch some great movies — both indie and mainstream.

The SXSW Film Conference and Festival has just announced this year’s complete features lineup. Beginning March 12, 119 films will screen during the festival’s nine days. 55 of those screenings will be world premieres. Below are some of the movies being shown:

Cyrus
The new film from the Duplass brothers, Cyrus stars John C. Reilly, Jonah Hill and Marisa Tomei in a story about a down-on-his-luck divorcee who meets the woman of his dreams — and her possessive adult son.

Get Low
Director Aaron Schneider directs Robert Duvall and Bill Murray in a true story about a 1930s Tennessee hermit who plans his own funeral party.

Kick Ass
Mark Millar and John S. Romita, Jr.’s highly-violent comic book about a teenager who decides one day to become a superhero is brought to life from director Matthew Vaughn and actors Nicholas Cage, Mark Strong and Christopher Mintz-Plasse.

Micmacs
A hit at this years Butt-Numb-A-Thon, Micmacs stars Dany Boon in a Jean-Pierre Jeunet movie about love among arms dealers.

The Runaways
Kristen Stewart and Dakota Fanning star in the biopic about Joan Jett and The Runaways — the legendary all-girl rock group.

Shining a light on new documentary and narrative features receiving their World, North American or US Premieres at SXSW.

BARRY MUNDAY
Patrick Wilson and Judy Greer star in a film about a man who wakes up after an attack to realize his genitalia is gone.

Cold Weather
Aaron Katz writes and directs a movie about a former forensic science major and detective fiction fan who returns to his hometown.

Leaves of Grass
Edward Norton stars as a set of twin brothers who couldn’t be more unlike. Tim Blake Nelson directs a cast that also includes Keri Russell and Richard Dreyfuss.

One Night in Vegas
A ESPN Films documentary about the friendship between Mike Tyson and Tupac Shakur.

The People vs. George Lucas
Alexandre O. Philippe exames the conflicted dynamic between filmmaker Lucas and his legion of fans.

SATURDAY NIGHT
James Franco directs a documentary about the week leading up to an episode of Saturday Night Live.

The White Stripes: Under Great White Northern Lights
A feature-length documentary about The White Stripes as they make their way through Canada on tour — culminating with their 10th anniversary show in Nova Scotia.

Innovation and creativity from new and emerging feature filmmakers, showcasing raw talent in documentary and narratives of varying premiere status.

11/4/08
A documentary about how people live through history is forged from footage of the day President Obama was elected president.

American: The Bill Hicks Story
Using a new animation technique, the film explores the  tale of one of the greatest stand-up comedians who ever lived.

Mars
A animated feature about mankind’s first mission to Mars deals with life, love and adventure in the year 2012 and features a voice cast that includes Mark Duplass, James Kochalka and Kinky Friedman.

NY Export: Opus Jazz
A scripted adaptation of a 1958 jazz ballet by Jerome Robbins is shot on location all over New York City and features the New York City Ballet.

The Parking Lot Movie
A documentary about a singular parking lot in Charlottesville, Virginia and the attendants who maintain it.

World’s Largest
A documentary about the quest of hundreds of U.S. towns to claim the world’s largest something — from strawberries to pheasants to Lava Lamps.

Showcasing the sounds, culture and influence of music and musicians, with an emphasis on documentary.

The Erectionman (Netherlands)
How one little pill changed the course of sexual evolution.

Reel Injun (Canada)
Cree filmmaker Neil Diamond takes a look at the Hollywood Indian, exploring the portrayal of North American Natives through a century of cinema.

Acclaimed standouts and selected previous premieres from festivals around the world

And Everything is Going Fine
Steven Soderbergh directs an intimate portrait of master monologist Spalding Gray, as described by his most critical, irreverent and insightful biographer: Spalding Gray. The film pulls from some 90 hours of material to fashion a new narrative exploring, among other things, art-making, mental illness and the sometimes thin line between the two.

The Freebie
Dax Shpard and Katie Aselton star in a film about a young married couple who decide to give each other one night with someone else.

The Girl With The Dragon Tattoo
Director Niels Arden Oplev films Stieg Larsson’s novel about a woman who  disappeared from a family gathering on the island owned and inhabited by the powerful Vanger clan. Her body was never found, yet her uncle is convinced it was murder and that the killer is a member of his own tightly knit but dysfunctional family. He employs a disgraced financial journalist and a tattooed, ruthless computer hacker to investigate.

Life 2.0
More than an examination of new technology, the film is foremost an intimate, character-based drama about people whose lives are dramatically transformed by the virtual world called Second Life.

The Thorn in the Heart
Michel Gondry’s newest film, further propels his groundbreaking filmography into the realm of the unvisited with a personal look at the life of Gondry family matriarch, his aunt Suzette Gondry, and her relationship with her son, Jean-Yves. Michel examines Suzette’s years as a schoolteacher and her life in rural France.  During the course of filming the documentary, new family stories are unearthed and Michel uses his camera to explore them in a subtle and sensitive way.

Cannibal Girls
They do EXACTLY what you think they do! Second City TV regulars Eugene Levy and Andrea Martin star in Ivan Reitman’s Canuxploitation classic as a couple on a romantic holiday who settle into a quaint little bed-and-breakfast run by a trio of flesh-eating ladies who fancy them for tomorrow’s menu.

Cotton
After a career spent helping the devout through prayer and trickery, Rev. Cotton Marcus invites a film crew to document his final fraudulent days as an exorcist.  Soon his faith is truly tested when a desperate plea from the father of a possessed girl brings him face to face with the devil himself.

Mind-bending international Midnighters, hand-selected by our friends at Fantastic Fest.

Higanjima (Japan/Korea)
Two years after losing contact, Akira discovers that his long-lost brother may be found on Higanjima Island.  He may also find on Higanjima an army of blood-sucking vampires.

Monsters
Six years after a NASA probe crashes, bringing alien life forms to Earth, a journalist agrees to escort a shaken tourist through an infected zone in Mexico to the safety of the US border.

Outcast
Mary and Fergal live their lives on the run, using an ancient form of magic to hide from a terrifying hunter.

Plus a super secret world world premiere to be announced (Maybe A Nightmare on Elm Street?)

All My Friends are Funeral Singers with Live Soundtrack by Califone

Zel, a fortune-teller, is aided in her prognostication by a band of ghosts, but when a mysterious light appears, she may have to give up the only family she knows.

Narrated by Leonardo DiCaprio and through the power of IMAX® 3D, Hubble 3D will enable movie-goers to journey through distant galaxies to explore the grandeur and mysteries of our celestial surroundings, and accompany space-walking astronauts as they attempt the most difficult and important tasks in NASA’s history.

The Lost World (1925) with Live Score by Golden Hornet Project

One of the finest achievements of the silent film era, Dreyer’s portrayal of Joan of Arc uses extraordinary, expressive close-ups to create a moving, intense and flawless work. With a new score by In The Nursery, who utilize state of the art music technology with a unique symphonic style, to produce a hauntingly evocative soundtrack.

The Unknown (1927) with Live Score by The Invincible Czars

Wyatt Brand helps bring a film/music convergence event to SXSW Film with The Invincible Czars screening and live, original score for the 1927 silent classic The Unknown starring Lon Chaney as an armless sharp-shooter.

For the complete list of films to be shown at SXSW and information about how to attend, visit www.sxsw.com/film.