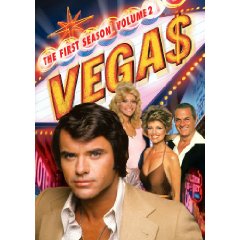 Dan Tanna (Robert Ulrich) was the last great TV detective to emerge in the ’70s. He was super cool tooling around the strip in his vintage red Thunderbird with the extremely rare car phone. He had a cool converted warehouse office behind Circus Circus. He was never scrapping for money since he was on retainer to The Desert Inn owned by Phil Roth (Tony Curtis). He had a smart sexy secretary in Beatrice (Phyllis Davis) and a ditzy sexy secretary in Anglie (Judy Landers). Both ladies were part time dancers at various venus so they always showed off their legs while answering the phones. Binzer (Bart Braverman) was his goofy flunky that lightened up the intense action. Tanna seemed at ease whether dealing with superstar headliners or infamous gutter dwellers. Vega$: The First Season, Volume 2 is another jackpot of celebrities needing a sleuth in Sin City.

“Serve, Volley and Kill” brings danger to the tennis courts at Caesars Palace. Randolph Mantooth (Emergency) is a John McEnroe-esque hot head with a racket. He’s worried about his sister (child star Pamelyn Ferdin) since mobsters want him to take a dive on this headlining match. Who can be setting him up for a fall: Lynda Day George (Mission: Impossible, Christopher George (Rat Patrol), Mamie Van Doren or Don DeFore (Hazel)? The only innocent star is Dawn Wells (Gilligan’s Island) since she’s just Tanna’s tennis partner. Red Buttons runs a wedding chapel scam that Binzer must bust. “Ghost of Ripper” has local citizen killing hookers in the style of Jack the Ripper. Tanna and Lt. David Nelson (Mission: Impossible‘s Greg Morris) must rely on the research of Murray Matheson to get a historical jump on the copycat killer. Matheson was the human search engine on Banacek. George Takei (Star Trek‘s Sulu) is the medical examiner poking through the butchered victims. “The Eleventh Event” finds a crippled gold medal winning decathlete being the victim of a kidnapping scheme. Who could plot such a dastardly crime? Robert Loggia (The Sopranos) wants more than a gold medal. Muhammad Ali makes a colorful cameo to inspire his fellow Olympian. “Kill Dan Tanna!” is an explosive tale of Dan’s old Vietnam war buddies wanting revenge. They break out a flame thrower for the big finale.

“Death Mountain” lets Tanna’s recurring pal Harlon Two-Leaf (One Flew Over the Cuckoo’s Nest‘s Will Sampson) get a shot at being the new chief of his tribe. The old chief was killed by Keye Luke (Charlie Chan’s Number One Son). His Japanese business connections have plans for the tribal land. Joan Van Ark is a really unbelievable archeologist. “Best Friends” has a killer after Phil Roth. Who is the assassin? Why it’s Tanna’s old pal (Family‘s John Rubenstein). Tanna really needed better friends . “Demand and Supply” is a shocker about high school girls that become prostitutes on the strip. Who could be behind such an evil thing? Would you believe John Fielder (Mr. Peterson on The Bob Newhart Show)? “Everything I Touch” has Tanna’s date get murdered while she’s getting ready for a romantic evening with him. The serial killer also goes after Judy Landers.

“Doubtful Target” is Binzer’s Death Wish. He finally introduces Tanna to his blind girlfriend. She’s hotter than you’d expect for the flunky. However their love comes to an end when Leslie Nielsen puts her in the scope of his rifle. The king of the fart jokes was once a cold blooded killer. Binzer wants to hunt down and kill Nielsen worse than a critic forced to review Nielsen’s last dozen straight to video comic movies. Can Tanna keep Binzer from going to jail for being a homicidal maniac? Tanna’s also lost his woman this season so he can talk from the heart. “Touch of Death” has a newlywed bride’s husband disappear. He vanishes so completely that the minister has no record of their marriage from the day before. “A Way to Live” leaps with Marlyn Mason in the role of a female daredevil. Somebody doesn’t want her jump to be a success. “The Visitor” darkens up Kim Cattrall as a Middle Eastern princess in jeopardy. Can Tanna prevent an international incident?

Vega$: The First Season, Volume 2 captures middle school Las Vegas since they really did shoot in Sin City. This is a real glimpse of the casinos, showrooms and cocktail lounges once graced by Nipsey Russell and Roy Clark. Robert Ulrich fits in so nicely in this environment. He pulls off wearing a vest with jean. What makes Vega$ addictive is that it combines the usual detective cases with the casting fun of The Love Boat. The show brings the glitz and glamor to the dirty world of crime. This is what the non-Farrah Fawcett Majors era Charlie’s Angels were lacking. Vega$ is a series that’s as hypnotic as the revolving fruit of a slot machine. Although no matter what the outcome, Dan Tanna will always walk away a winner.

The Episodes
“Serve, Volley and Kill,” “Ghost of the Ripper,” “The Eleventh Event,” “Kill Dan Tanna!,” “Death Mountain,” “Best Friends,” “Demand and Supply,” “Everything I Touch,” “Doubtful Target,” “Touch of Death,” “A Way to Live” and “The Visitor.”

The video is 1.33:1 full frame. The transfers are from the 35mm source so the details of Middle School Las Vegas are vivid. Thrill to the carpet design inside the Desert Inn. The audio is Dolby Digital Mono. Amazing how much quieter slot machines were back in the late ’70s.

Episodic Promos (0:30) can be watched as a group or before each individual episodes. It sounds like Ernie Anderson is introducing the clips.

Vega$: The First Season, Volume 2 is another stack of winning chips. Dan Tanna proves nobody knew how to solve a case in sin city. Even when these cases could easily get sloggy, the Vegas attitude makes them riveting TV for fans of glitzy kitsch.