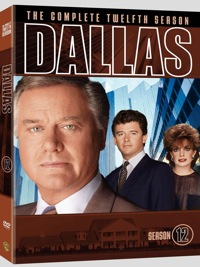 When you think of 1980s dramatic television, one that springs to mind is Dallas. There were other shows around at the time, but in the late 1970s, Dallas was really the first prime-time soap that was also a “water-cooler show”; it had all of America talking about it the morning after having aired. But by the time the twelfth season aired in 1987, viewers had all but moved away from the huge Texas metropolis. The good days of Dallas were long gone, and only hardcore fans stuck around to see seasons 12, 13 and 14.

The series centers on the Ewing family, who live on the Southfork Ranch, just outside of Dallas, Texas. The Ewing family consisted of patriarch Jock Ewing, who started Ewing Oil, the family’s corporation; Miss Ellie, his wife who managed Southfork Ranch, the family home; and their three sons: J.R., the oldest and ruthless CEO of Ewing Oil, married to former Miss Texas Sue Ellen Shepard; Bobby, the youngest and the nice guy, who married Pamela Barnes, daughter of the Ewing’s chief business rival; and Gary, the middle son who was considered an outcast by his father and eventually moved to California with his wife Valene. The basic premise of the show was like a cross between Romeo and Juliet and Bonanza. Never before had Americans seen so much drama, or “melodrama” depending on how you look at it, at night in prime-time.

At the end of season 11, J.R. (Larry Hagman) was shot once again, but this time by Sue Ellen (Linda Gray). That was after J.R. pushed Sue Ellen’s lover, Nicholas Pearce, off the ledge of a window. However, J.R. makes a quick recovery, and he is all better by the time the second episode of twelfth season starts. No charges were brought on Sue, because the authorities classified the shooting as self-defense. But Sue Ellen still wants revenge against J.R. Eventually, she meets a screenwriter/director named Don Lockwood (Ian McShane), and hatches a plan that involves bringing the details of her sordid marriage to J.R. to the big screen. The aim is to produce a work that will humble and humiliate J.R. for good. J.R. has plenty of problems other than Sue Ellen, though. He also meets a young girl from rural Arkansas named Cally Harper (Cathy Podewell). That results in another gun being put in his face by her redneck brothers. This also leads to an untrue rape charge and some jail time for J.R. Meanwhile, J.R.’s newest enemy, Carter McKay (George Kennedy), moves into Ray’s old house near Southfork and stirs up more trouble for the Ewing family oil business.

In the beginning of season 12, things appeared to be different. Fans were almost led to believe that the writers weren’t going to take this show as seriously anymore and make it more fun and interesting by just throwing out ridiculous stories. By the end of the season, though, the same problems from previous seasons came back up. There would be a handful of sub-plots introduced in one episode of this season, and then the next it would be completely forgotten. The cast did great some great additions in Cathy Podewell and George Kennedy. They all attempted to keep things moving along, but eventually the writing would let them down. That included probably the most anti-climatic cliffhanger in Dallas history.

Episode 3 – The Call of the Wild
The Ewing men go on a backwoods hunting trip, where J.R. takes a liking to Cally Harper, a local waitress; Cliff offers Jordan Lee a deal on Barnes/Wentworth; Casey hits oil.

Episode 4 – Out of the Frying Pan
J.R. is accused of raping Cally. Bobby makes a surprising offer for partnership in Ewing Oil. Clayton and Carter face a water shortage on their ranches. Sue Ellen completes her divorce from J.R.

Episode 7 – Showdown at the Ewing Corral
J.R. offers Cally a new life if he can leave Haleyville; the tensions between Southfork and McKay escalate to new highs; Sue Ellen and Jeremy Wendell continue their relationship, while Bobby and Tracey Lawton do the same; Cliff’s joining Ewing Oil shocks Dallas.

Episode 8 – Deception
Southfork is under lockdown with the Carter McKay situation brewing; J.R. inquires about his rights as a fugitive; Jeremy Wendell wants Sue Ellen to seek revenge; Tracey opens up to Bobby; April and Lucy meet.

Episode 10 – The Sting
Miss Ellie agrees to sell a tract of Southfork to Carter McKay; April and Lucy plot against Casey Denault; Sue Ellen has words with Jeremy Wendell; J.R. receives unwelcome visitors in his office and at Southfork.

Episode 11 – The Two Mrs. Ewings
J.R. seeks a way out of his marriage to Cally; Sue Ellen considers entering the movie business; Weststar’s new chairman is announced at the Oil Baron’s Ball; Bobby and Cliff pursue a deal in Louisiana.

Episode 13 – He-e-ere’s Papa!
Cally demands a real wedding to be held at Southfork; J.R. is pressed for answers in Nicholas Pearce’s death; Cliff investigates a real estate deal; Bobby hopes Christopher will like Tracey, who starts working at Weststar.

Episode 16 – Wedding Bell Blues
J.R. and Cally marry at Southfork, though a tornado threatens the ceremony; Cliff opening a letter for J.R. triggers a massive brawl; Sue Ellen has Don Lockwood come to Southfork for film research; Lucy tries to steer Tracey Lawton away from Bobby.

Episode 17 – The Way We Were
Cally tries to keep Bobby and J.R. on good terms each another after they have yet another quarrel; Sue Ellen grows closer to Don Lockwood, and is pressured to begin production on her film; Tommy McKay gets involved with drugs; Cliff has questions for April.

Episode 18 – The Serpent’s Tooth
Sue Ellen and Don Lockwood keep seeing each other; J.R. seeks information on Weststar’s dealings, hoping to get back into Ewing Oil; Bobby and Tracey Lawton’s relationship starts suffering; Christopher is jealous of the time Cally spends with John Ross.

Episode 19 – Three Hundred
Sue Ellen has second thoughts about her movie plans; Tommy McKay desperately needs $100,000, and April suffers from it; fate lands Bobby and J.R. in a situation where they’re forced to hash out their differences.

Episode 21 – And Away We Go!
Tracey Lawton leaves to take care of a recovering Tommy McKay; J.R. and Cally rope Helstrom into a compromising situation at a Western bar; Bobby sees April in the hospital; Sue Ellen cast the role of J.R. in her movie; Afton returns.

Episode 22 – Yellow Brick Road
J.R., Bobby, and Cally arrive in Salzburg for business and pleasure; Sue Ellen’s movie is set to shoot; Cliff and Afton see more of each other; Carter McKay claims to want peace; Clayton is injured.

Episode 23 – The Sound of Money
Bobby and J.R. turn down an offer to buy Ewing Oil; Cliff proposes to Afton; Cally proves too much for J.R., who also runs into an old flame; Clayton’s forgetfulness continues; Sue Ellen has concerns about who else will be hurt if she follows through with her movie.

Episode 24 – The Great Texas Waltz
Vanessa Beaumont offers herself to J.R.; Bobby is busy with April’s surprise visit; Cliff suspects Afton’s daughter is also his; Sue Ellen and Lockwood spend time with John Ross so they can get better acquainted; Clayton is still not himself.

Episode 25 – Mission to Moscow
Bobby and J.R. head to Moscow to learn more about the dealings in Europe; Clayton is helped with his faulty memory; Sue Ellen finds revisting the past tougher than she envisioned; Cliff again tries to commit to Afton; Cally and Vanessa Beaumont meet.

Episode 26 – The Reel Life
Back in Dallas, Bobby and April continue seeing each other, though someone is out to frighten her; Carter McKay is warmly welcomed back at Weststar; Miss Ellie is puzzled by a birthday card addressed to Jock; Sue Ellen warns Cally she’ll have to fight to make her marriage work; Sue Ellen threatens J.R. that she’ll release her movie if he crosses her again… or anyone else.

The video is given in fullscreen color with an aspect ratio of 1.33:1. The transfer is poor this time around. The previous DVD sets had always showed the age of Dallas, but this season is probably the worst of them all. You would think it would get better, but it doesn’t here.

The audio included is in English 1.0 Mono sound. There are subtitles available in English as well. The dialogue and music come out loud and clear. The audio is basic, but once again it’s more consistent than the video quality. No major problems here.

There are no extras for this season’s DVD set, which shouldn’t surprise anyone who has watched or bought the previous three or four DVD sets.

Once again, if you are going to own these late seasons of Dallas, you have to be extreme hardcore fans who want all the seasons. Unlike the eleventh season, there’s some fun to be had, except for the horrible season cliffhanger. Casual fans are best with just sticking to the early seasons.