Every day Robert Saucedo shines a spotlight on a movie either so bad it’s good or just downright terrible. Today: The reluctant dragon movie. 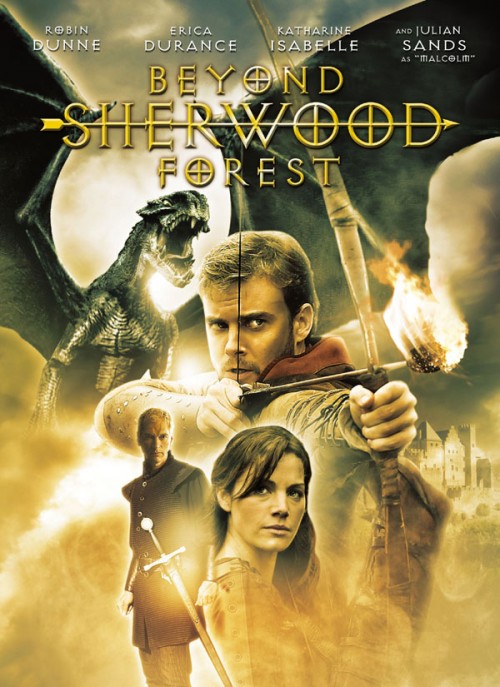 Like a lot of Americans, this past weekend I watched and enjoyed the heck out of How to Train Your Dragon, the Dreamworks cartoon featuring a collection of the cutest dragons this side of Pete.

My extreme enjoyment of the film could be due to the fact that it had a quality script, top-notch voice acting and stunning animation — or it could just have been the fact that earlier in the week I watched Beyond Sherwood Forest, a different type of dragon movie.

Beyond Sherwood Forest takes the basic Robin Hood mythology and tosses in the added bonus of a dragon. Not just any dragon, either — the film features a shapeshifting dragon that, when not terrorizing the emerald archer, turns into the lovely Katherine Isabelle of Ginger Snaps fame.

You would think adding a giant toothed reptile to the Robin Hood story would be a recipe for fun — or at least a really cheesy Syfy made-for-TV movie that is fun to mock. You would be wrong.

Beyond Sherwood Forest‘s biggest crime is not the groan-inducing dialogue or the stiff acting — it’s the fact that the movie is just flat-out boring.

For a guy who loved Dragonheart as a kid and used to have nightmares about Smog from The Hobbit, the idea of a boring dragon movie is just plain wrong.

Robin Dunne stars as Robin Hood, the famed antihero who steals from the rich to give to the poor. While his intentions may be good, it doesn’t change the fact that stealing is still stealing. Where did Robin Hood learn this anti-societal behavior? As a kid, Robin witnessed his father’s murder at the hands of Malcolm, the power-hungry consult to Prince John.

Rushing off into the woods to escape a similar fate, Robin leaves behind everything from his former life — including his young love Maid Marian, played by Smallville‘s Erica Durance.

After the passage of many years, though, Maid Marian and Robin Hood are thrown back into each others life when, sick of Robin Hood’s meddling, Prince John orders Malcolm (played by Julian Sands of Warlock fame) to finally put an end to the glorified thief. Not one to full around with subtle methods of assassination, Malcolm sics his pet dragon on Robin Hood.

Now, with the help of the Merry Men and his childhood crush, Robin Hood must set out into the dark woods past Sherwood Forest — in search of the only thing that can kill the dragon that is ravaging villages in search of the archer.

The film plays out like your standard Saturday morning adventure fare. The plot beats are as predictable as the weather in Antarctica.

There are a few action-filled set pieces — mostly featuring Robin Hood and his posse futility throwing stuff at a pissed off dragon for about five minutes before running away to hide.

The story’s plot plays like a combination of Kevin Costner’s Prince of Thieves and a beginner’s game of Dungeons and Dragons.

There’s a precocious young rapscallion, some truly atrocious CGI wolves and some pretty unconvincing battle scars courtesy of a dragon’s claws — in other words, your typical straight-to-video fantasy schlock.

To the credit of the filmmakers, though, the transformation scenes in which Isabelle changes into a winged dragon are pretty impressive — in a low-budget computer effects sort of way.

In the end, I can’t recommend the film to anybody.

It’s not entertaining in any one particular way and not insultingly awful enough to enjoy on a purely masochistic level — it’s just a throwaway piece of cotton candy fluff. It’s light enough of a distraction that it won’t ruin your appetite for any future Robin Hood movies but its not nearly filling enough to be a meal on its own. Beyond Sherwood Forest is forgettable in every sense of the word.

Robert Saucedo wishes he could turn into a dragon — but then he’d have to be worried about a Na’vi trying to stick his ponytail into his USB drive. Follow him on Twitter @robsaucedo2500.