Every day Robert Saucedo shines a spotlight on a movie either so bad it’s good or just downright terrible. Today: Derek Mears is a crossdressing werewolf! 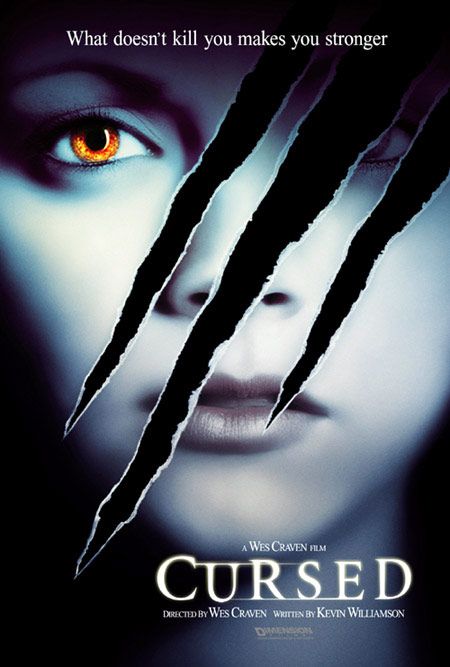 Scream was one of my favorite horror movies as a kid.

That fact, combined with my unexplainable love for werewolf movies, is why I was so excited when I first learned Wes Craven and Kevin Williamson were ramping up to film a new lycanthrope flick in the early part of the aughts.

The film stared Christina Ricci and Jesse Eisenberg as two siblings who must face the curse of the werewolf after they are injured by a beast.

From all initial reports, Cursed seemed it could very well be the greatest thing to come for horror movie fans since the image of Sam Raimi miraculously appeared on the cloak of Mexican villager Juan Diego in 1531.

Cut to February of 2005 where I’m the only person sitting in an opening night screening of what turned out to be an almost inexcusably jumbled mess of a film. That night I cried like I was a country western song character and my hound dog had just gotten run over by my ex as she stole my pick-up truck.

So what went wrong for the two creators of the ‘90s biggest horror movie franchise?

It would be easy to blame the colossal failure of the film on the Weinstein Brothers’ insistence to release Cursed as a PG-13 film instead of the R-rated horror film that had been shot. This claim is not easily backed-up, though.

Having seen both the 97-minute theatrical cut and the 99-minute unrated cut, the added gore and dismemberment included in the unrated cut does not do much to improve the general movie-watching experience. In fact, the overabundance of CGI wounds and gore actually increase the chances that audiences will laugh at the film instead of jumping. It’s hard to take any film seriously that insists on having a geyser of computer-generated blood spray from a character’s neck like an Old Faithful tribute designed by Tom Savani’s nerdy little brother.

No, even before the Weinsteins had the film re-edited to attract high school students, the film suffered its share of problems.

In fact, production on the movie was halted for nearly a year as script problems were worked out. When the movie resumed production, a ton of footage was completely scrapped — footage that included performances by eventual non-cast members Skeet Ulrich, Mandy Moore, Omar Epps, Illeana Douglas, Scott Foley and Corey Feldman.

In the end, I think Cursed‘s biggest problem was that Williamson and Craven bought too many shares of their own hype. While Scream was fresh due to its tongue-in-cheek meta-referential nods to the horror genre, Cursed overdid the camp — resulting in a movie that fails as a horror movie due to its unwillingness to shake the silly but never quite succeeds as a comedy either.

When you have a werewolf appear out of nowhere to give cops a middle finger, it’s very hard to take the movie seriously when it then tries to become dark and brooding five minutes later.

It’s a shame that the film couldn’t rise above its sub-par script. The movie featured some pretty decent performances by its cast which included Joshua Jackson, Shannon Elizabeth, Milo Ventimiglia, Portia de Rossi and Judy Greer — with cameos from Scott Baio and Craig Kilborn as themselves.

Jesse Eisenberg’s performance as Jimmy Myers is especially good — essentially a preview of what would later be his biggest hit to date, Zombieland. As a nebbish young man navigating the supernatural, Eisenberg is plenty funny — in that Michael Cera-sorta way.

There have been a lot of werewolf movies in the last few decades. Most of them have been terrible. Cursed could have broken free from the curse that seems to strike films about shapechangers but, in the end, it failed due to its instance on being cute instead of scary.

Robert Saucedo promises not to review another werewolf movie for at least a week. Follow him on Twitter @robsaucedo2500.