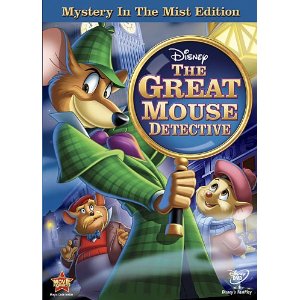 Most people considered the Golden Age of Disney animated films to be the time from the first one in 1951 with Snow White and the Seven Dwarfs through the end of the 1960s, which is around the time that Walt Disney died. Those same people who then also consider the the 1990s to be the Renaissance of Disney films. With the release of The Little Mermaid in 1990, Disney animated feature films made a strong comeback that continued until Pixar made its way on the scene to change the animation game. But in the 1970s and 1980s, there were still plenty of animated films from Disney that were released. You probably would have to be a young kid or a parent of a young kid during this time to remember most of them, though. One of most known films from this Dark Age of Disney was The Great Mouse Detective.

The Great Mouse Detective is Disney’s adaptation of the Basil of Baker Street children’s book series written by Eve Titus and illustrated by Paul Galdone. Like the books, this movie features three rodent characters, who are pretty much the animal versions of famous characters from Sir Arthur Conan Doyle’s Sherlock Holmes mystery series.
This film takes place 1897 London, where Basil (voice of Barrie Ingham and very similar to Sherlock Holmes) gets hired by Olivia Flaversham (voice of Susanne Pollatschek), a young mouse girl whose only parent, toymaker father Hiram (voice of Alan Young), has been kidnapped before her eyes by a peg-legged bat. The bat, named Fidget (voice of Candy Candido), is the henchman of Basil’s evil nemesis, Professor Ratigan. On the mission to find and stop Ratigan, Basil and Olivia are joined by Dr. Dawson (voice of Val Bettin and very similar to Holmes’ sidekick Watson) an army physician back home from an assignment in Afghanistan, and Toby, a reliable olfactory-gifted Basset Hound. Ratigan (voice of Vincent Price), meanwhile, is working his abductee hard to come up with a mechanically sound way to overthrow the mouse Queen of England.

Clearly this is a mice version of a Sherlock Holmes story. In fact, if this wasn’t Disney, you could call it a blatant rip-off of Sherlock Holmes. But this was neither the first nor the last time they took a story featuring human beings and twists it by throwing in animals in their place. There is nothing wrong with that, since this film is still entertaining. The more original villainous Professor Ratigan is the most interesting character in the entire film. Vincent Price does a great job of bringing menace a life here. The rest of the voice cast also do a good job in their roles as well, though.

Even though the story isn’t original, the animation actually is. This is the first time Disney used CGI effects along with hand-drawn animation. The background that this film is set in, which definite amazing to look at. You have to tone down your expectations from what we know today, though. Something also interesting to note is that the music in this film was created by Henry Mancini (of Pink Panther fame). Most of the songs are very catchy and feel more like from a 1990s Disney animated feature. Although, at times there is too much emphasis on songs that don’t necessarily mix well with what is happening on screen in that particular moment of the story.

The video included is available in both widescreen color presented at the 1.78:1 aspect ratio, which is enhanced for 16:9 TVs. The quality is good, and definitely improved slightly from the previous release. But since this film is nearly 25 years old, it’s not the best looking animation around. Still no major problems here.

“So You Think You Can Sleuth?” Featurette –
This runs 5 minutes and it’s an animated look at the history of detective work. It talks about Scotland Yard, the Pinkertons, and Sherlock Holmes. It uses many clips from various old Disney cartoons. It also includes a crime-solving puzzle for you and your friends to figure out as well.

“The Making Of The Great Mouse Detective” Featurette –
This runs 7 minutes and it’s your basic “making of” featurette. It’s mostly devoted to the voice cast, especially Vincent Price and singer Melissa Manchester. We also hear Roy E. Disney, Glen Keane, composer Henry Mancini, and animator Phil Nibbelink talk about making this movie as well. It’s too short to really get in-depth, but still should be interesting enough for fans of this movie.

“The World’s Greatest Criminal Mind” Sing-Along Song –
Here you can sing-along to Ratigan’s big musical number from the movie. Should be fun for kids.

This is worth a rental for those that haven’t seen it and love Disney animated films or have kids. The lack of new quality extras and, along with not all of the previous extras being transported over, makes this an “iffy” purchase. If you have this DVD, you are probably better off sticking with the original DVD release. If not, this is probably the release to get.