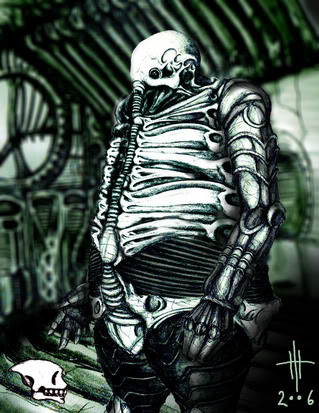 Because you demanded it: The origins of the Space Jockey.

Out on promotion for his new version of Robin Hood, Riley Scott has been dropping bits of trivia about his next batch of project — including the long gestating prequel to Alien.

Among the news to surfaces comes a report from MTV that the prequels (yes, Scott is apparently contemplating two films) would detail the story behind that massive chair-bound alien from the first film in the xenomorph franchise.

Dubbed the Space Jockey, the alien will be at the center of whatever new batch of ideas Scott is cooking up for his yet to be titled excursion into Alien‘s origins.

“It’s set in 2085, about 30 years before Sigourney [Weaver’s character Ellen Ripley]. It’s fundamentally about going out to find out ‘Who the hell was that Space Jockey?’ The guy who was sitting in the chair in the alien vehicle — there was a giant fellow sitting in a seat on what looked to be either a piece of technology or an astronomer’s chair. Remember that?”

Scott goes on to say that the movie would feature series mainstay, the Weyland corporation — having not yet merged with their better half, the Yutani corporation.

Other news that came from the interview involves Scott’s musing about the need to redesign the alien — possibly with the help of original designer H.R. Giger.

“Yeah, the thing about Alien vs. Predator is, I know it’s commerce, but what a pity. I think, therefore, I have to design — or redesign — earlier versions of what these elements are that led to the thing you finally see in Alien, which is the thing that catapults out of the egg, the face-hugger.”

Scott supposes the film will hit theaters in 2012 or even possibly late 2011. To read the complete interview including news about whether Sigourney Weaver will return for the prequel (hint: not likely), click here.

The Pulse: I’ve got to say — out of all the questions about the Alien series that keeps me up at night, I can’t say the origins of the Space Jockey are high on that list.

While there have been some examples of quality prequels being made, the odds are not stacked in the favor of Scott’s new excursion into space. With news also circulating that the film will be shot in 3D, I’m growing less and less excited about Scott’s return to the universe he helped create. But what do I know? I’ve always been more of a Predator guy myself.

Sound off: What do you think of what Scott has in mind for his movie? What do you want to see included? Not included?