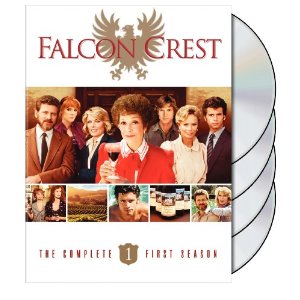 The success of Dallas made primetime a hot space for soap operas. Earl Hamner Jr. was coming off the long-running success of The Waltons. Could he go from wholesome family drama on Walton Mountain to create a cutthroat high society world that would rival J.R. Ewing and his kin?

Instead of oil, this family dealt in the sophisticated world of wine. They nurtured the soil to reap their riches instead of merely pumping it without mercy. He also pulled a casting coupe as well. Instead of a man calling the shots he created a matriarch to wear the pants in the family business and smartly cast Jane Wyman in the role. She was receiving quite a bit of attention since her ex-husband was newly elected U.S President (and leader of the free world) Ronald Reagan. Jane was now in charge of primetime with her Falcon Crest vineyard and winery. Falcon Crest: The Complete First Season contains the seeds that led to a nine season run during the ‘80s.

“In His Father’s House” launches the series with a shocking death. Emma Channing (Margaret Ladd) is making out with a field hand in the catwalk above the wine vats. They’re discovered by Uncle Jason Gioberti (Harry Townes). He isn’t happy to discover she’s going to marry the lowlife. A fight ensues and a wood railing breaks. Uncle Jason falls to his death. She calls up her mother, Angela Channing (Jane Wyman), for help. Mama gives her major amounts of help as they stage the uncle’s body in a pick up truck and push him over a cliff. There’s a brilliant explosion, but do all the questions burn up at the bottom? Of course not. It’s a prime-time soap opera. This moment will come back to haunt the family. According to the family will, Jason and Angela’s dad declared if either child dies of mysterious circumstances, the other family loses control of Falcon Crest. Will the truth of how Angela covered up Jason’s death get exposed? Can she keep the rightful heir Chase Gioberti (Robert Fox) clueless?

There’s plenty of family members constantly backstabbing each other to get control of the winery or just the money. The biggest one is Angela’s grandson Lance Cumson (Lorenzo Lamas). Strange to see Lorenzo looking ‘80s dapper on the screen since he’s pretty much been reduced to a TMZ joke and star of the embarrassing Leave It to Lamas on E! When he was Lance, you can believe that women swoon for this prime hunk versus the Lamas that emerged after Renegade.

The first season is filled with constant undermining schemes from various family members. “A Time for Saboteurs” proves Chase will use his army connections to attack rival grape growers. “The Harvest” lets Lance blow up Chase’s property. “Tony Comes Home” has a missing husband return to the property. “The Extortionist” makes the secret of Jason’s death float up. “Victims” gets nasty when Lance wants to stop a baby from inheriting the operation. “The Candidate” brings out the knives as Chase runs for a political position with the promise to take care of Angela. “Heir Apparent” keeps up the fear of exposing the truth of Jason’s cliff diving. “Ultimate Answers” finally makes Chase an owner of Falcon Crest, but Angela doesn’t want him as an equal partner.

Like all good soap operas, quite a few vintage actors visit the family including John Saxon, Lana Turner, Mel Ferrer and Dana Andrews. But the guest stars don’t overshadow the family treachery in the vines. Jane Wyman is in complete control of the action. She makes Lady MacBeth look like Donna Reed. Earl Hamner Jr was able to completely twist his Waltons wholesome family perspective into den of vipers. This show deserves to be considered with Dallas and Dynasty. Falcon Crest: The Complete First Season contains a vintage year for ruthlessness in a bottle.

The Episodes
“In His Father’s House,” “A Time for Saboteurs,” “The Tangled Vines,” “The Harvest,” “Tony Comes Home,” “Kindred Spirits,” “The Extortionist,” “Lord of the Manor,” “Dark Journey,” “Victims,” “For Love or Money,” “Family Reunion,” “The Candidate,” “House of Cards,” “Heir Apparent,” “The Good, The Bad and The Profane,” “Penultimate Questions” and “Ultimate Answers.”

The video is 1.33:1 full frame. The transfers appear to be made from old broadcast video masters instead of lifted off high definition transfers. You’ll experience the same fuzziness that Lamas has now. “Heir Apparent” is apparently from a syndicated tape since it’s a few minutes shorter than the other episodes. The audio is Dolby Digital mono. You’ll only get to hear Lamas grunt from the middle of the screen. The subtitles are in English.

Falcon Crest: The Complete First Season brings the over the top drama desired in a prime time soap opera. But unlike other shows in which the female characters quietly manipulated the men in charge, Falcon Crest has a woman in charge of the empire. Jane Wyman’s as calculating as her ex-husband when it came to running an empire in the ‘80s.