Over at IMPAwards, the poster site has the first teaser poster for Jack Black’s Gulliver’s Travels. With a tagline that reads “Black is the new Big,” that pretty much tells you that 20th Century Fox put little effort into its marketing strategy. Sort of like when the marketing team invented the word “Squeakel” when it was attached to the title of the Alvin and the Chipmunks sequel. Okay, maybe I’m examining this poster way too much, but I don’t think 30-plus Liliputians, some rope and wooden posts would be enough to hold down Jack.

As you might know, Jonathan Swift’s Gulliver’s Travels takes Gulliver to more places than just the island of Liliput, but instead of cramming all those adventures into one movie, Fox would rather have another franchise. With the teaser poster revealed, a trailer can’t be far behind. 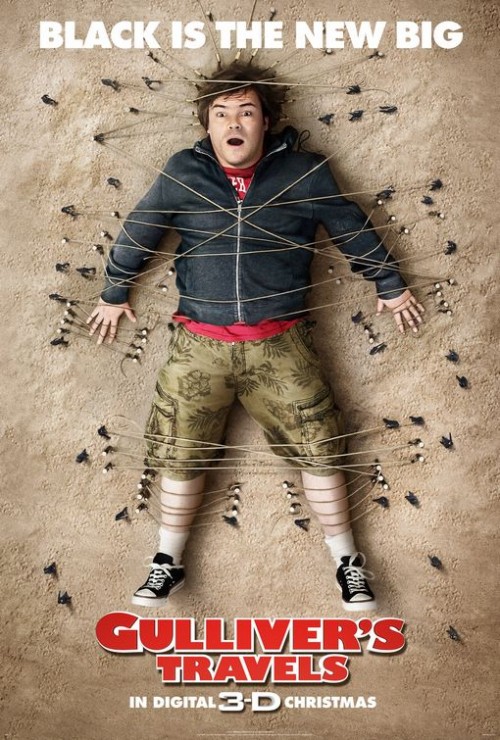 Travel writer Lemuel Gulliver (Black) takes an assignment in Bermuda, but ends up on the island of Liliput, where he towers over its tiny citizens.

Rob Letterman is making his live-action debut as a director after co-directing both Shark Tale and Monsters vs Aliens for DreamWorks Animation. Along with Jack Black, the film also stars Emily Blunt, Jason Segel, Amanda Peet and Billy Connolly. 20th Century Fox will release Gulliver’s Travels in theaters in 3D and 2D on December 22, 2010.