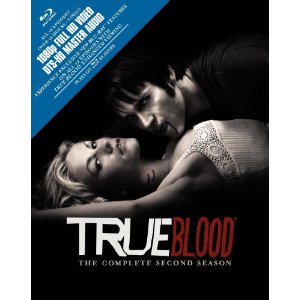 Vampires are a hit and miss property nowadays. If it’s anything to do with the Twilight franchise it’s easily successful as New Moon had one of the biggest openings for a film ever, and was amongst the highest grossing films of 2009. Eclipse, the third film in the franchise, is poised to be one of the bigger films of 2010. But The Vampire’s Assistant was a box office flop and several television shows about the vampire have come and gone.

One vampire property that’s managed to find a niche is True Blood, an HBO series based off Charlaine Harris’ “Southern Vampire Mysteries” novels. Embracing the blood, violence and rampant nudity that a vampire show ought to have in it, True Blood takes a more grounded approach to the myth of the vampire. Instead of elevating them as beautiful creatures, they are just as filthy and mucky as humans.

In a world where vampires and humans are integrated due to ‘Tru Blood’, a blood substitute developed by the Japanese, Bon Toms in Louisiana is host to our protagonists: Sookie Stackhouse (Anna Paquin) and Bill Compton (Steve Meyers). He’s a vampire who died during the Civil War, she’s a telepathic waitress and they have a romantic relationship that’s frowned on by both sides. After season one concluded with a corpse in the parking lot of the local tavern with its heart cut out after the mystery of the young woman killer was solved, season two begins with the investigation into the murder and the mystery it unravels. Along the way the entire town goes through trials and tribulations, many of them a mystical kind.

What makes True Blood succeed in its second year, when many shows begin to falter, is that it inherently knows its strengths and plays to them. This is a series that lives on melodrama, murder and mayhem and it has a comfortable groove throughout the season. From exploring the vampire hierarchy to beasts of myth, this is a show that has a clear sense of where it’s going (taking its cues from the books) and isn’t taking any missteps.

If Twilight is a disease festering in the world of vampires, True Blood is the cure.

Presented in a widescreen format with a Dolby digital format, the Blu-Ray looks and sounds immaculate. It’s been cleaned up even from its original HD broadcast and is just stunning to behold.

Character Perspectives from some of the more periphery characters are included.

Reflections of Light is a series of promotional pieces from the “Fellowship of the Sun” that plays heavily into the show’s second season.

The Vampire Report is a mock news piece about vampire news.

HBO has a knack of crappy extras but magnificent original programming on its DVD releases and the second season of True Blood is no exception.