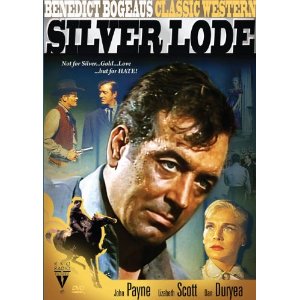 Movies need champions. Uninformed people believe a good film will become a hit and remain popular forever. But that’s not true. No matter how great a film is, the legacy of a movie depends upon a cult of critics, filmmakers and fans to reach new audiences over the years. Otherwise it can be forgotten and decay inside an abandoned film vault. Silver Lode is a film that could easily end up in that position except the Western has found people eager to publicly praise its tale of McCarthyism in the guise of a gunfight. Clips from the movie were featured in A Personal Journey with Martin Scorsese’s Through American Movies. Recently it was listed in 1,001 Movies to See Before You Die. Those two shining endorsements made me curious to watch Silver Lode: Special Edition.

Nobody wants to have their wedding day ruined. No community wants their 4th of July festivities hijacked. But that’s exactly what happens to Dan Ballard (John Payne) and the wild west town of Silver Lode. Sheriff Ned McCarty (Dan Duryea) and his posse ride down main street ready to ruin this doubly special day. He’s got orders to bring Ballard to justice for killing his McCarty’s brother. Turns out Ballard has been living a lie that even his bride (Rose Evans) never knew about. He was a gunslinger. He admits to the killing, but claims it was self-defense. He’s also curious how McCarty became a sheriff. He can’t get a real answer since it’s a national holiday and the telegraph line has been cut. The locals turn on Ballard. How can they not believe the man with the badge over a fake neighbor? The only two people that stick with him in the plight is his bride and the local hooker (Dolores Moran).

Silver Lode deserves the attention. This is a small Western with a big message about who can you really trust. What makes a person truly the authority that can’t be questioned. The movie keeps up the tension with Ballard doing his best to avoid McCarty and his posse. His supporting cast includes Harry Carey Jr. and Alan Hale Jr. (Gilligan’s Island) so you think they are upright in their pursuit. Director Allan Dwan stages an amazing climax inside a church that keeps up the tension. The only downside of watching Silver Lode is being 1,000 films short of the grave.

The video is 1.33:1 full frame. The transfer’s colors look slightly rough although that might be from the lower budget than the normal John Wayne Technicolor epic. The audio is Dolby Digital mono. The levels will have you blink when they break out the guns.

Allan Dwan – Sherwood to the Sands of Iwo Jima (10:55) is an appreciation of the director from Joel Blumberg. The director had a career that lasted six decades. Blumberg is passionate in giving us the details of Dwan’s life.

John Payne (10:01) is also an appreciation by Joel Blumberg. He does a great job telling us about the actor’s career and history. Clips and stills illustrate his talk.

Silver Lode: Special Edition gives a proper context to this praised yet under exposed Western. John Payne gives a career performance as the gunslinger turned friendly farmer. For those working their way through that list of 1,001 films, Silver Lode will be a shining surprise.