Every day Robert Saucedo shines a spotlight on a movie either so bad it’s good or just downright terrible. Today: Superheroes! So damn hot right now! 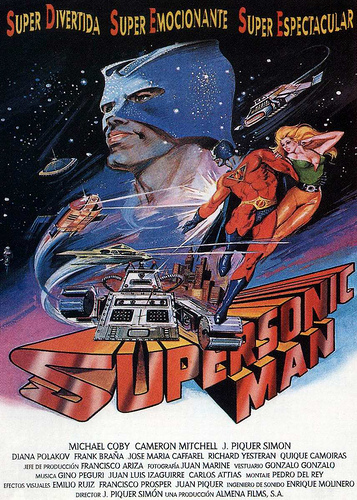 With the success of Iron Man 2 and the looming madness of Marvel’s continued Avengers franchise and Christopher Nolan’s third Batman film, it’s clear that superhero films aren’t going anywhere — pretty good for a film genre that almost died out a little more than ten years ago.

After the crippling disaster that was Batman and Robin and the trail of the dead superhero franchises that paved the way to Joel Schumacher even getting the job in the first place, at the turn of the decade superhero films looked to be going the way of the Western or the Las Vegas prostitute who is accidentally murdered in a night of carnal pleasures, taken out to the desert and buried next to a coyote den.

Then came X-Men, Bryan Singer’s mostly mature look at comic book heroes, and everything changed. Now, superhero films are more often than not targeted to the parents of children instead of the bright-eyed toddlers wearing Superman underoos.

As I went and saw Iron Man 2, I wondered if children were even able to absorb any of the film’s plot (and subsequently, wondered if this will damn the comic book industry when it eventually finds itself unable to bring in new, younger readers to replace the ones dying of heart failure as the years of Taco Bell and Mountain Dew diets finally collapses their arteries). A part of me pines for the days of family-friendly superhero movies — the “gee wow” masked heroics that I watched as a kid and that formed me into the lifelong fan of comic books that I am today.

Then I watch a film like Supersonic Man, a 1979 Spanish/Italian child-friendly superhero film, and I drop all notions of chasing Christopher Nolan away from Batman with pitchforks and torches. I even come close to committing sepaku in shame for even doubting Mr. Nolan.

When Paul twists a ring on his finger and repeats the clearly non-copyright infringing oath “May the great force of the galaxy be with me,” he is transformed (literally — his heroic identity is played by another actor, Jose Luis Ayestaran) into Supersonic, a superhero sadly lacking a mustache but who does have the amazing abilities of flight, super strength and the transubstantiation of guns into bananas.

As a superhero, Supersonic will gladly save a person’s life, but as Paul, he’ll even more gladly mock his adoring fans for believing such silly things as superheroes even exist. At that point, he’ll fly away to catch criminals in a net, take them into a secluded field and then torture them by making them look at his gaudy costume. 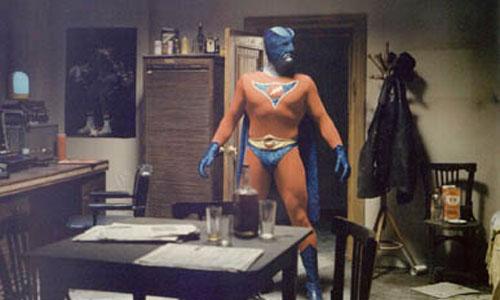 Supersonic fights sharks, steals champagne from restaurants, gives booze to recovering alcoholics, hides from flamethrowers behind his girlfriend and all around blows as a superhero. He can single-handedly destroy gigantically impressive space stations just by flying through them as supersonic speeds, so I guess he has that going for him.

Supersonic Man is a silly relic from the past — proof that Europeans, for all their highfalutin snobbery, are not above aping America’s pop culture and removing everything that was remotely fun or interesting about it.

Supersonic Man is bad cinema at its worst – only recommended to those who are either masochistic or mad scientists in need of a torture device to pry the secret identity out of captured superheroes.