HBO Home Video has revealed that its recent epic miniseries, The Pacific, will make its DVD and Blu-ray debut on November 2, 2010. Perfectly timed for Veteran’s Day (November 11) and the holiday season, all ten parts will be spread across six discs for both the DVD and Blu-ray sets. The releases carry a suggested retail price of $79.99 and $99.98, respectively.

The Pacific tracks the real-life journeys of three U.S. Marines – Robert Leckie (James Badge Dale, The Departed), Eugene Sledge (Joe Mazzello, The Sensation of Sight) and John Basilone (Jon Seda, Close to Home) – across the vast canvas of the Pacific theater during World War II. The miniseries follows these men and their fellow Marines from their first battle with the Japanese on Guadalcanal, through the rain forests of Cape Gloucester and the strongholds of Peleliu, across the bloody sands of Iwo Jima, through the horror of Okinawa, and finally to their triumphant but uneasy return home after V-J Day.

The DVD set is jam-packed with extras that provides content that gives the viewer a better understanding of the war in the Pacific. In-depth features include:

Presented in HD 1080p video and DTS-HD master audio, The Pacific on Blu-ray allows viewers the best audio and visual presentation and elevates the experience with exclusive content. All the supplemental material found on the DVD set is carried over, along with two interactive companion features. Those extras are: 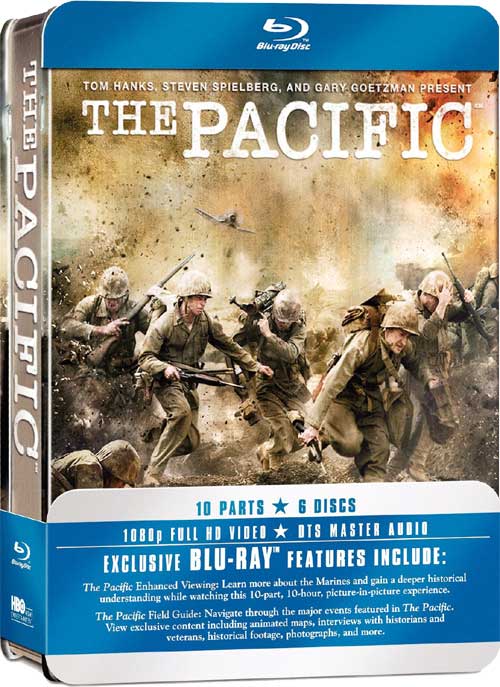