I’m a huge fan of Scrubs but even I had a hard time getting through the revamped and resurrected show when it returned for its ninth season sans half of the series’ regular cast. Taking the show from Sacred Heart Hospital to the halls of Sacred Heart’s medical school, the ninth season of Scrubs proved to be the show’s final season. 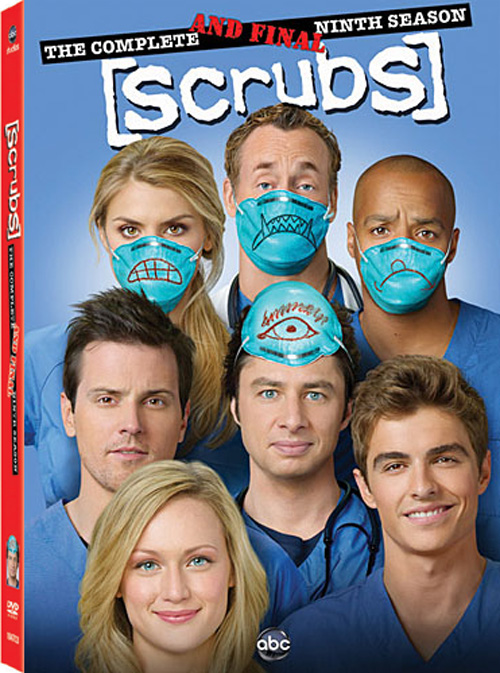 According to tvshowsondvd.com, a two-disc DVD set will contain all of the season’s episodes in 1:33:1 full screen video format — apparently ditching the high-definition, widescreen format the show picked up when it moved from NBC to ABC a few years back. Although Scrubs‘ eighth season was released on Blu-ray, only a DVD release of the ninth season has been announced thus far.

Special features will include a featurette entitled “Live From the Golf Cart,” a blooper real, deleted scenes, and “Scrubbing In,” a feature describing the show’s metamorphosis between the eighth and ninth seasons. Cost is $29.99 SRP in the USA (Amazon.com is taking pre-orders for $14.99) and $35.99 SRP in Canada. 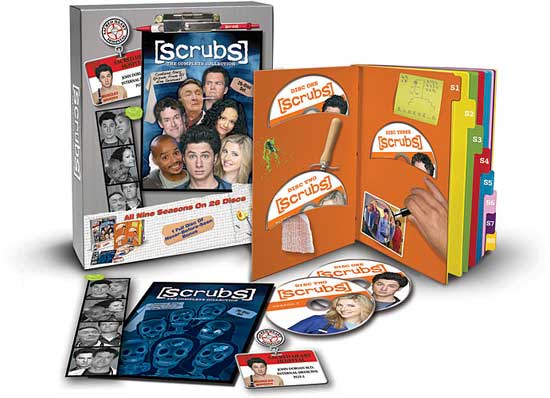 Also scheduled for release on September 28 is Scrubs — The Complete Collection, a 26-disc set featuring all 182 episodes from the series’ run. All previous DVD sets’ special features will be included in addition to a bonus disc with new supplemental material. Extra trinkets found in the set will include a Sacred Heart Hopstial ID tag and more. Cost is $149.99 SRP in the USA (“>Current pre-order price is $104.99 at Amazon) and $189.99 SRP in Canada.

Although I was not able to make it through the series’ last few episodes, I look forward to catching up with them on DVD, where hopefully they will play better than they did during their initial broadcast. Scrubs is a show that started off strong but eventually petered out — although the series’ eight season finale was a highlight of the show’s run and would have been an excellent series finale. I always found Scrubs played better for me in marathon viewing sessions instead of individual episodes. With the entire series now scheduled for DVD release, I look forward to rediscovering the show in the years to come.