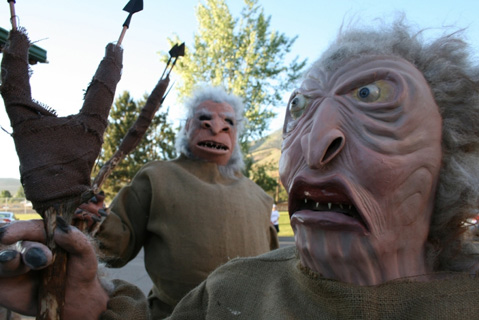 Michael Paul Stephenson, the young star of Troll 2 who went on to direct a documentary dealing with the film’s cult success, recently told shocktillyoudrop.com that plans are underway to bring Best Worst Movie to DVD as soon as this fall.

“We will, hopefully, in the next month announce who we are working with on the DVD,” Stephenson said. “We’re working on pairing the two films together [Best Worst Movie and Troll 2]. I can’t confirm it yet, but it’s looking good. It’s been a process, but we’re working on it. What we’re shooting for is a late October release for Halloween, but more importantly, we found out October is National Vegetarian Awareness month!”

Troll 2 is currently available as a two-pack with the original unrelated film, Troll.

Stephenson’s documentary is a truly great film. It was one of the best movies I saw last year and I am dying to watch it again as soon as possible.

Best Worst Movie humorously deals with the legacy of Troll 2 and the effects the film has had on its cast — specifically George Hardy, the dentist-turned-belt-tightener who played Stephenson’s father.

Best Worst Movie is currently traveling around the country playing select cities. This weekend, it will open in Dallas, TX. To see where the film goes next check out the complete list of upcoming screenings.