Trish Stratus did an interview with The Wrestler magazine. Here is the cover photo: 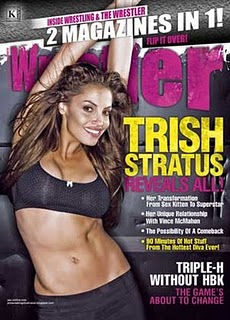 Here are some quotes from the preview at Pro Wrestling Illustrated:

On the “Bark Like A Dog” segment with Vince McMahon: â€œPeople think I must have felt humiliated. Are you kidding? Look at the result. I was simply an actress doing a part which allowed me to show emotionÂ­â€”thatâ€™s a good thingâ€

On the inspiration of The Rock: â€œI had to have surgery. It was the worst thing that could happen. But that allowed me to sit back and study matches. I watched a lot of The Rockâ€™s stuff, and thought, There are no girls doing what heâ€™s doingâ€”why not, maybe I could be the female version of The Rock.â€

On today’s Divas: â€œToday, I see the girls doing each otherâ€™s moves. They should go to the videogame and play the character! Everyone has their own signature moves!â€

On her legacy: â€œWhen WWE aired a package talking about how WrestleMania was the place where legends were made, and it mentioned Hulk Hogan, The Rock, Steve Austin, and Trish Stratus, it was shocking to me. Whether thatâ€™s accurate or just WWE marketing, itâ€™s pretty awesome.â€

On the possibility of a comeback: â€œI always want to do something that is challenging and impactful, no matter what I do â€¦ Absolutely, Iâ€™d go backâ€”but only if I could do something that makes a difference.â€