The raging turtle is back and ready to kick Barugon all over Japan. Fans of Mystery Science Theater 3000 can rejoice as the second entry in the Gamera series is finally being released in America in the original Japanese with a widescreen image. Gamera Vs. Barugon – Special Edition arrives on July 6. The following press release from Shout! Factory contains a spoiler for those who haven’t seen Gamera, The Giant Monster – Special Edition: 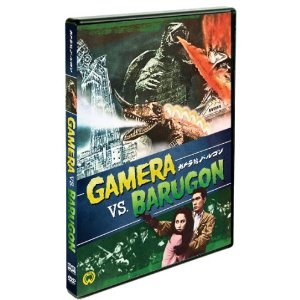 Returned from his exile into space, Gamera is the last survivor of a species of colossal chelonians, rumored to have originated 8,000 years ago from the lost continent of Atlantis. This titanic terrapin is feared by adults and loved by children.

Hot off the heel from the excitement of fan favorite Gamera, The Giant Monster – Special Edition DVD, Shout! Factory will unleash the second film in the original series, Gamera Vs. Barugon – Special Edition on July 6, 2010. The DVD contains a collectible reversible cover, a special booklet featuring an essay by actor Kojiro Hongo, audio commentary with August Ragone and Jason Varney, publicity galleries and widescreen presentation of the original movie from an all-new HD master and more! Packed with heart-pounding action and jaw-dropping fun, the collectible Gamera Vs. Barugon – Special Edition DVD is priced to own at $19.93.

Even though Japan’s Self-Defense Forces sent Gamera hurtling into space in a giant rocket at the climax of Gamera: The Giant Monster, a stray meteor soon collides with his flying metal prison, freeing the ginormous turtle and allowing him to spin back to Earth. That sounds like it spells doom for Japan, but when another colossal creature named Barugon is awoken from an ancient slumber, all Hell breaks loose. And only Gamera can stop him.

After three greedy Japanese explorers steal a rare opal in New Guinea, not realizing that it is actually a monster egg, and unwittingly subject it to infrared radiation, it hatches and grows to immense size. Barugon is not simply bad because he’s big: His elongated tongue, itself a deadly weapon, can emit a freezing spray, while he has the ability to shoot a deadly, laser-like rainbow from his back. And when our favorite fire-spitting Gamera becomes trapped in the creature’s frozen grip, mankind looks like it could be doomed. Can one of the explorers, Keisuke Hirata (Kojiro Hongo, Satan’s Sword), and a New Guinea native, Karen (Kyoko Enami, The Woman Gambler), help to defeat Barugon before it plunges Japan into a new Ice Age?

Gamera Vs. Barugon, the second entry in Daiei Studios’ monster series, was directed by veteran Shigeo Tanaka (The Great Wall) and is more lavish than the original in terms of scale and scope — it was shot in spectacular color! Noriaki Yuasa (Gamera, The Giant Monster) was charged with helming the visual effects for this outing, and the results are fantastic!

The original films have woefully been underrepresented on DVD, especially releases featuring the authentic Japanese versions. Shout! Factory, in association with Kadokawa Pictures, will continue to present Gamera Special Edition home entertainment releases in North America. Upcoming highlights include Gamera Vs. Gyas, Gamera Vs. Viras, Gamera Vs. Guillon, Gamera Vs. Jiger, among others.