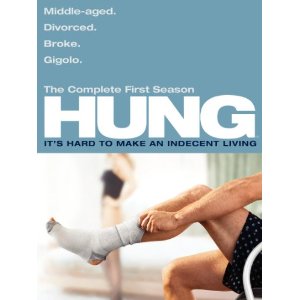 Ray Drecker (Thomas Jane) is a middle-aged history teacher that life has passed him by. Formerly a baseball great in high school and college, ending up another minor leaguer who lost it all with a ligament injury and winding up divorced and broke in his home town. After attending a seminar on wealth creation and entrepreneurship, he comes up a brilliant idea. Since the only thing he’s ever been good outside of baseball and teaching is sex, he decides to become a male prostitute and service the women of the Detroit metro area. He even has a pimp, his friend Tanya (Jane Adams), who is new to the profession as well. The show’s first season follows the two as they get into the business without a clue as what to expect.

It’s an interesting show that already feels like it’s in the middle of its third or fourth season early on. It has such a good groove to it early on that it’s hard to tell that this is the show’s first season. It’s a dark comedy that has a razor’s edge to it from the first minute. And it all starts with Thomas Jane in what is a career reclamation project at this point.

Jane, who seemed poised to become an A-list star after The Punisher had surprising box office life and The Mist garnered him critical reviews (and much better box office returns than expected), saw his career fall into what seemed to be the beginning of Direct to Video status with several films heading that route. After pulling out of a Punisher sequel, which itself might’ve been a good career move because of how it failed both critically and commercially, Jane has found unlikely success with rave reviews and good ratings with Hung. And it’s easy to see because this is the sort of role he thrives on: enough drama to sink the teeth into but enough comedy to not make it completely dramatic.

Ray isn’t completely inept but has just enough common sense to make him relatable. It’s refreshing to see because given the material usually you’d expect him to be a loveable buffoon or comically stupid; Ray’s just a normal guy with a super-sized gift trying to keep himself afloat. He makes for a fascinating everyman and Jane has found a great character that fits his unique acting skill set.

Hung is at times darkly dramatic and darkly funny, with a hint of tragedy throughout. But it’s a terrific show throughout.

The one thing HBO does with all of its releases is present it in as good, or better than, condition than it did on original broadcast. Hung looks terrific on DVD, as the desolation and depressing nature of modern Detroit comes through eerily.

There are Audio Commentaries on various episodes.

About Hung is a piece about the show’s origins. The show’s creators wanted a show reflecting the times, apparently, and came up with the idea of an average guy trying to make ends meet in a non-average way.

The Women of Hung is a piece about the women of the show, exploring their relationships with Ray in superficial depth.

Ray and Tanya’s Personal Ads are a quick two minute viral marketing piece where Ray and Tanya try to create a video ad for their service.

HBO seemingly can’t do anything wrong these days in terms of what it chooses to green light for its television series. Hung is a top notch show and definitely worth the watch.