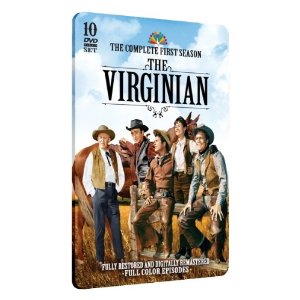 Often a series about a huge ranch is about the rich and powerful family inside the big house. The Virginian gives credit to the real person who keeps a ranch going: the foreman. Judge Henry Garth (The Exorcist‘s Lee J. Cobb) owns the Shiloh Ranch outside of Medicine Bow, Wyoming. But he’s helpless without the tireless work of a foreman only known as The Virginian (Forbidden Planet‘s James Drury). During the course of nine seasons there were numerous owners of Shiloh Ranch, but only one foreman in charge. He did have assistance from Trampas (The Land that Time Forgot‘s Doug McClure), a semi-lazy cowpoke. The Virginian: The Complete First Season gives the semi-mysterious foreman 30 exciting episodes to realize he’s the power even without his name on the deed.

The Virginian was a TV series that composed of feature films. The 75 minute running time puts each episode at the same length as B-films. This is a miracle of production that they were able to make this series. Nowadays a show is barely 40 minutes long with only 22 episodes. How slack. The Virginian made sure that like a movie, they had plenty of famous faces amongst the regular cattle.

“The Big Deal” brings Ricardo Montalban (Fantasy Island) to Wyoming for inherited land. Over the years the land has been leased to Judge Garth in order to let his cattle graze on two ranges. He wants to buy the land and lies about its importance in the hope of lowering the price. How can a judge cheat an honest man? Will the Virginian allow such a deception? “The Brazen Bell” lets George C. Scott arrive as the new school teacher. He had an issue at his old post when a few students proved to be flammable. His new assignment goes bad when escaped prisoners turn his class into a show and ransom presentation. “Impasse” sets the Virginian off to collect wild horses to fulfill an army contract. Eddie Albert (Green Acres) and his sons (including Alien‘s Tom Skerritt) swear the horses are their property. Things will get ugly unless Trampas can appeal to Eddie’s daughter.

The greatest example that these episodes are really movies is found on “It Tolls for Thee.” Cult director Sam Fuller (Shock Corridor) brings along his own script and Lee Marvin. If you’re a fan of either men, this should be part of your collection. Marvin kidnaps the Judge for ransom. Lee keeps altering the terms including wanting safe passage to Idaho. Events get more tense when one of Lee’s disgruntled ex-pals joins the posse to hunt him down. He’s not looking for justice. Years later the duo would hook up for The Big Red One. As proof that this was a real Western, Claude Akins (Sheriff Lobo) arrives for “West.” He and a few buddies think there’s still a lawless west. The idea backfires with extreme consequences.

Another major star power moment has Bette Davis in “The Accomplice.” Trampas gets charged with the shooting of a bank president. Davis is the teller who pins him as a gunmen. Turns out she’s not as innocent as she appears. It’s up to the Virginian to trick her into revealing the truth. Otherwise his pal is screwed. “If You Have Tears” has one of the Virginian’s pals accused of murdering his mistress’ husband. He hides the pal and looks for the real killer. The big suspect is the mistress’ brother (Man From U.N.C.L.E.‘s Robert Vaughn) who is more poet than cowboy. Nancy Sinatra makes a cameo as a bar singer. Star Trek fans will enjoy seeing DeForest Kelly in “Duel at Shiloh” and James Doohan in “The Man Who Wouldn’t Die.”

The Virginian: The Complete First Season is a set that you need to pace yourself watching. It’s not like a modern show where you can marathon a season in a lazy Sunday. There are Western film festivals that are shorter than this boxset. Just sit back and let The Virginian take care of the work over the course of weeks.

The video is 1.33:1 full frame. The color transfers add to the cinematic nature of the show. Nothing looks too cheap. The audio is Dolby Digital mono. You might have to turn up the volume a couple of times.

Conversations with James Drury (45:25), Gary Clark (28:12), Robert Fuller (11:02), Peter Brown (7:46) and Roberta Shore (19:40) give extensive information about the series and other Westerns done by the stars. Turns out they did most episodes of The Virginian over nine days with several camera units so the actors and director could make deadlines.

The Virginian: The Complete First Season is the perfect father’s day gift. The series reminds us that it’s not always the owner of a ranch that controls the operation. The Virginian truly calls the shots. He also knows how to fix any situation whether it involve livestock or trouble friends. The feature film length of the episodes allows the characters to flourish instead of rush around the sets.