Tales of the Gold Monkey: The Complete Series – DVD Review 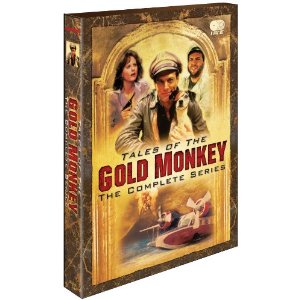 Action and adventure have always been a key element to escapist entertainment. The world of rugged heroes, daring plans, mysterious lands and priceless treasure were a staple of movie serials in the ’30s and ’40s. The genre made a major comeback in the early ’80s with Raiders of the Lost Ark. When Tales of the Gold Monkey debuted back in 1982, critics declared the TV series was a network’s attempt to cash in on Indiana Jones. That’s only half true. Creator-Executive Producer Donald Bellisario (NCIS) had been pitching his action series about a pilot in the South Pacific for years. It wasn’t until the success of Raiders that network executives realized there was an audience for throwback entertainment. Gold Monkey owed its green light to Raiders, but it was not a clone except in tone. Jake Cutter wasn’t a university professor that ran around the globe looking for lost treasure. Cutter flew around the South Pacific on a Gruman Goose as freelance pilot. He didn’t break out a bullwhip, but stuck with his gun. Tales of the Gold Monkey: The Complete Series gathers the pilot movie and the 20 episodes.

“Tales of the Gold Monkey (Pilot Feature) introduces us to Jake and his world. His best friend is Jack, a dog that wears an eye patch. The precious pup does have a fake eye, but Jake uses it as a wager during a card game with a Nazi (Magnum P.I.‘s John Hillerman). His back up pal is mechanic Corky (Jeff MacKay), While he seeks refuge in the Monkey Bar on Boragora, it turns out to be a hotbed for spies getting ready for World War II. The sweet singer (Caitlin O’Heany) is secretly an American spy. Rev, Willie Tenboom (John Calvin) is a closet Nazi agent. He’s doing his best to get in tight with Princess Koji (Marta DuBois). There is a rumor of an island that has a Gold Monkey statue made of an alloy that will be perfect for weapons. Only trouble is getting to this remote location without a seaplane. The climax involves the singer tied to a tree while Jake battles to the death with a Nazi in the middle of killer monkey turf. It’s a fun movie by itself. The regular episodes maintain the action pace of this pilot movie.

“Shanghaied” gets Corky in trouble when he’s kidnapped by a captain with a hook. He’s needed to fix the engine on what turns out to be a slave ship. Jake wants to find his buddy, but he’s being knocked crazy by malaria. There’s plenty of action when they encounter the fearsome Mud People. “Black Pearl” isn’t based on the John Steinbeck novel. Turns out the Nazis are testing an atomic bomb in a nearby island. It’s a giant black ball with swastika. Jake gets tangled up in this when the American agent infiltrating the Nazis can’t make a meeting. Jake must pose as a scientific genius. “Escape from Death Island” has Jake and Corky get stuck inside a French penal colony when they get busted for smuggling an inmate to the plane. Their best hope lies in the hand of Monkey Bar owner Bon Chance Louie (Roddy McDowall).

Before Jake went freelance, he fought the Japanese as part of the Flying Tigers in China. He was an Ace during this period of his life. However one of the guys he shot down wants revenge for the death of his brother in “Honor Thy Brother.” He’s willing to use traps and cobras to spook Jake before getting him into a cockpit for one more dogfight. “Once A Tiger….” puts Jake into the air to recover a downed shipment of gunsights. “The Lady and the Tiger” has the actual beast arrive on the scene in proper man eating form. He has to protect an Amish mother and son from the beast. “Sultan of Swat” plays off Babe Ruth’s trip to Asia. In this case we get a Yankee ballplayer visits Boragora. Jake is excited until the hitter gets busted on murder charges. “A Distant Shout of Thunder” reminds us why it’s not good to touch any taboo tiki items while visiting an island in the Pacific. This case has the singer touch an abandoned statue which unleashes a lot of bad luck including fire, frogs and earthquakes. “Mourning Becomes Matuka” finally gives Jake a chance to earn big bucks except it involves protecting Princess Koji. She’s marked for death.

Tales from the Gold Monkey brings the thrills even after three decades. Stephen Collins looked like a dashing hero from the ’30s. His blond hair and cocksure attitude makes him believable behind the controls of his seaplane. Caitlin O’Heany does seem like she’s also from this period. The only thing this duo is truly lacking to be totally authentic is black and white film. It is a shame that the network axed the series. The stories and the action improve over the season. Tales of the Gold Monkey: The Complete Series makes the case of this show being classified as Brilliant, but Canceled and not merely an Indiana Jones cash in.

The video is 1.33:1 full frame. The transfers appear to have been taken off broadcast videotape instead of a 35mm source. The details still come out at the Monkey Bar. The audio is Dolby Digital Mono. The levels are fine for the wild adventure moments when music and gunshots fill the air.

Audio Commentaries are on five episodes with writer Tom Greene giving the insider tales. He tells us that “A Distant Shout of Thunder” was supposed to be the season finale.

Making of Tales of the Gold Monkey (36:13) features recent interviews with Steven Collins, Caitlin O’Heany and a few crew members. They explain how the series evolved. There’s also discussion about how the series was on the bubble for renewal, but Don Bellisario ticked off a network suit. Thus is was canned even though another network’s research showed the series would last for seven seasons.

Character Biographies (11:29) has text roll up wth details about the various characters.

Personal Biographies (5:55) has only the details for Collins and O’Heany. It rolls up so you can read it without clicking for the next page.

Fact File (3:48) is plenty of trivia about the series including how the original title was Tales of the Brass Monkey. The change happened because Brass Monkey is a drink that would become famous thanks to the Beastie Boys.

Stills Gallery is busted up for color, black and white, Catlin’s Original Costume and Artifacts.

Tales of the Gold Monkey: The Complete Series is a action romp through the South Pacific. The tension mounts as Americans, Nazis and Japanese agents get themselves into position for the coming war. The only man who can keep them in check is Jake Cutter and his one-eyed dog. There’s a liberal amount of romance, daring, dashing moments between the characters. The series is perfect throwback entertainment.