Disc News: Kong to be King of Blu-Ray

Filmmakers can remake King Kong all they want, but none come close to the spectacle of the original. This is the greatest tale ever told about a monster ape ruling a dinosaur infested island who takes Manhattan. Now the 8th Wonder of the Cinematic World will bigger with a 1080p transfer as King Kong hits Blu-ray on September 28. 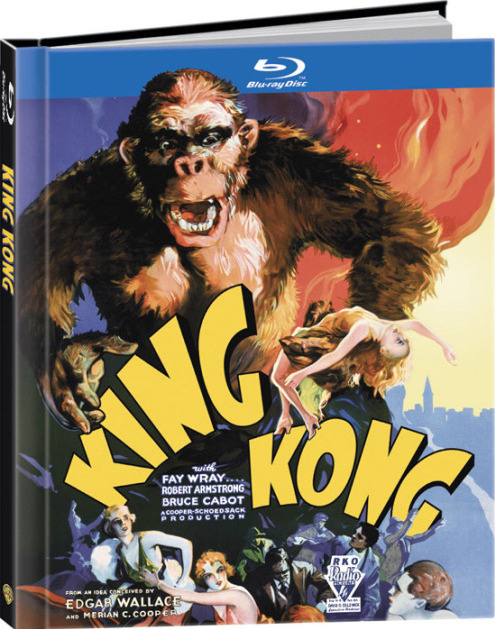 With 32 pages of rare photography and trivia, the captivating Blu-ray Book, written by Rudy Behlmer, centers around the vision of director Merian C. Cooper and his larger than life persona that brought the story of King Kong to the screen. A prolific film researcher and historian, Behlmer personally interviewed Cooper and has written numerous books and contributed to a wide variety of documentaries, videos, DVDs and laser discs about Hollywood’s Golden Age.

In this very special Blu-ray release, the newly remastered film is presented in its 1933 entirety and includes scenes that were originally considered too shocking for the 1938-1956 re-releases. With equal parts adventure, horror and old-fashioned romance, King Kong is a milestone of movie-making that has endured for more than seven decades. Named as one of the “100 Best Films of All Time” by Time Magazine, King Kong premiered in New York City in 1933. The film was an instant success, breaking box-office records to become one of the top moneymakers of the 1930s.

King Kong‘s state-of-the-art visual effects, entertaining story and touching conclusion captivated audiences and started a worldwide love affair with the giant ape. The film has also been included in seven of the American Film Institute’s Top 100 lists, including the “100 Years…100 Movies” list.

A film ahead of its time, King Kong defied the technological limitations of the 1930s. Special effects pioneer Willis O’Brien’s revolutionary stop-motion animation was not only technically brilliant but also highly imaginative and continues to impress even in today’s era of computer-generated wizardry. Directed and produced by Merian C. Cooper and Ernest B. Schoedsack, with a rousing score by Max Steiner (who also scored Gone with the Wind), King Kong stars Robert Armstrong, Bruce Cabot and Fay Wray, whose memorable performance as damsel in distress Ann Darrow cemented her place in pop culture and earned her the nickname “The Queen of Scream.”

In addition to its Blu-ray debut, King Kong is available On Demand from cable and satellite providers, and for permanent download and digital rental through iTunes, Amazon Video On Demand, PlayStation Store and Xbox LIVE Zune Video Marketplace.

Film Synopsis
King Kong (1933)
Robert Armstrong stars as movie producer Carl Denham who travels to a mysterious, uncharted island in search of material for his next film. Also aboard are unemployed actress Ann Darrow (Fay Wray) and adventurer Jack Driscoll (Bruce Cabot). Once the crew reaches Skull Island they discover it is home to prehistoric beasts including Kong, a giant ape who becomes obsessed with the crew’s blonde starlet. King Kong teems with memorable moments, from the audience’s first glance at the giant ape to his last stand atop the Empire State Building.