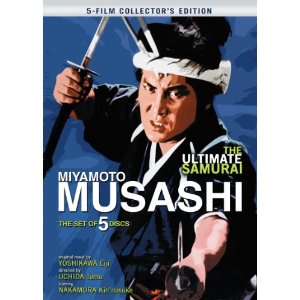 For Japanese history buffs or scholars of Samurai culture, the name Musashi Miyamoto is an important one. The author of The Book of Five Rings, one of the essential texts on Japanese swordsmanship and philosophy, and a man renown for fighting over sixty duels without a loss, Miyamoto (1584–1645) is probably the equivalent of a figure like Davey Crockett or Wyatt Earp in American culture, and therefore is almost more important to the culture as a mythical figure rather than a historical one. As a result the man has been the subject of many books and films, most notably the novel Musashi by Eiji Yoshikawa, a semi-historical account of the warrior’s life known to have sold over 120 million copies, and regarded as the Japanese Gone with the Wind.

It was this novel that was the basis for the epic Samurai Trilogy (1954-1956) directed by Hiroshi Inagaki and starring Toshirō Mifune, largely considered the definitive film series concerning the life of Musashi, but with the release of AnimEigo’s new five-film DVD box set, The Ultimate Samurai: Musashi Miyamoto, a series of movies also based on the novel from director Uchida Tomu and starring the incredible Nakamura Kinnosuke in the title role, the issue is perhaps up for debate. Though Inagaki’s films are classic examples of the genre, the series directed by Tomu is arguably more daring in its depiction of the legendary figure, both dramatically and visually. Delving deeper into the swordsman’s relationship with his enemies and loved ones, this series is a monumental experience within this genre and deserves a chance at rediscovery by enthusiasts.

Through the nearly ten hours of story found here, a number of arcs are touched upon in Miyamoto’s life, and much of the series’ success has to go to Nakamura Kinnosuke for his brilliant performance. His introduction to us in 1961’s Musashi Miyamoto, the first picture in this set, is hardly a heroic one, as the man is first shown as a soldier on the run after his lord is defeated in a major battle. This early depiction of Musashi is one of a wild man, selfish in his pursuits for glory, and hunted as a fugitive, not even able to rest once reaching his homeland. While Mifune’s performance in the role was equally fierce, Kinnosuke really seems to bring out the savagery in this character, mercilessly killing anyone in his path and showing no mercy to those just trying to do their assigned task of bringing him in.

In Miyamoto Musashi, II-V he is reborn in samurai culture, but we still see a man struggling further with his soul, as he often has control of his ferocity, but is even scarier in some manner due to his newly acquired mastery of swordsmanship. What’s admirable is this constant battle between Musashi’s very Zen-like pursuit of betterment through martial arts and his sudden bursts of violence. This makes for a very human portrayal overall, and Kinnosuke is constantly challenged as an actor to still make this character appealing, but never lets us down. This isn’t a man that looks for trouble but finds it often, whether it’s the loved ones of a cowardly friend thought to have died due to Musashi’s actions or enemies looking for revenge after Miyamoto’s victories with his sword.

Miyamoto’s two most important conflicts are depicted with great detail in these pictures. First of which is the epic struggle with the dishonorable Yoshioko clan, constantly trying to fool Musashi into duels against groups of samurai rather fighting the swordsman in straightforward combat. This is an important depiction of just how much Musashi often outclassed his opponents, as in every way his regard for integrity and bushido in his life is his most prominent characteristic, while the Yoshiokos live as spoiled men, given everything rather than earning it. One by one, Musashi picks off the members of the dojo, culminating in an amazing 73 vs. 1 fight to the death, which has Miyamoto at the top of his skill, but still failing in his own crises when it comes to his bettering his soul as much as his sword.

Even more intriguing is his rivalry with swordsman Sasaki Kojiro , played by Ken Takakura. It’s interesting to see Takakura in these films (he appears in the last three of them) because he’s actually a pretty recognizable face from some of his American work in the ‘70s, ‘80s and ‘90s, most notably from the Sydney Pollack film The Yakuza and Ridley Scott’s underrated crime thriller Black Rain. The impression he makes in Black Rain as a stoic buddy cop to Michael Douglas’ “on the edge” detective is actually so strong that this performance as Kojiro is kind of a revelation.

Kojiro, who was historically Musashi’s greatest opponent, is portrayed here in these films as a character that is in many ways an exemplary samurai, but underneath the surface is quite malevolent. This is in many ways a brooding performance that makes you feel that secretly he hates Miyamoto and his skill, while outwardly praising him, even defending him against the Yoshioko dojo. There are just hints of real malice, as if he is so good at swordsmanship that regular rules don’t necessarily apply to him socially or otherwise. The movies also do a great job of Kojiro getting to earn his arrogance by making him nearly invincible as an adversary.

Perhaps my biggest complaint about the Samurai Trilogy is that compared to many of the films’ contemporaries, its action has not aged well, even taking place off-screen at times. Tomu’s series often stages wild and exhilarating combat, with Kinnosuke appearing to have lightning speed and technique. For the climactic clash with the Yoshioko clan, the movie even goes to black and white, reminding me of “The Bride Vs. Crazy 88″ fight from Kill Bill, Vol. 1, and while this film’s battle obviously isn’t quite as impressive or gory, you can see the great skill with which it was put together.

Just as good though, is the way the series is often able to tear at you emotionally, from how Musashi’s quest keeps him from connecting with others, especially Otsu (Irie Wakaba) a long-suffering woman completely committed to the swordsman, or Musashi’s various disciples who are constantly abandoned when our hero is nearly captured or must face multiple attackers. Musashi’s life was one of many hardships and a lot collateral damage went into him becoming one of the greatest of all samurai. It’s commendable how these five films are never afraid to show this side of his life in conjunction with the man’s legend and adventures, always making for an interesting mix of fact and myth.

The Ultimate Samurai: Musashi Miyamoto is a set of motion pictures well worth watching for those that love samurai cinema or for those that love historical epics in general. In a way that few series are able to, you feel like you get to experience this world and the hardships that could go with it, and see how a man’s legend could grow with his many accomplishments. Filled with action, intrigue and well placed drama, the life of Musashi Miyamoto was a fascinating one, and these movies are worth your time in order to discover that life for yourself.

AnimEigo has done a great job of restoring these pictures, as the image quality and prints are nicely presented throughout. Thankfully these films look free from too much wear and tear, with terrific colors and very little noticeable artifacts. I didn’t notice any major problems with the film’s sound either.

Audio Commentary from Film Historian Stuart Galbraith IV – This track runs over the first film and is packed wall to wall with information from historical perspectives about Musashi to information about this production as well as tons of info simply about how Hollywood and Japan differed in film making at the time of release for these films. Galbraith’s commentary is informative and engaging from beginning to end and makes for a terrific reason to watch the first film again.

Trailers for each of the films

The Ultimate Samurai: Musashi Miyamoto is a terrific box set of films that manages to depict both the legend and humanity of one of Japan’s greatest samurai and philosophers. The films manage to mix action and drama quite nicely and make for a fascinating journey to the Japan of the 1600s. The prints here are nice, and while I would have liked more extras, what’s here is quality.