EA has announced today that Chicago Blackhawks Captain, and Stanley Cup Finals MVP, Jonathan Toews will grace the cover of NHL 2011. This is only the second time in EA’s history that a athlete from the same team appeared on the cover of the game, the first being Luis Gonzalez & Randy Johnson from the Arizona Diamondbacks on Triple Play Baseball 2002/MVP Baseball 2003. 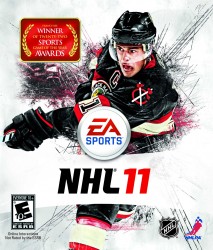