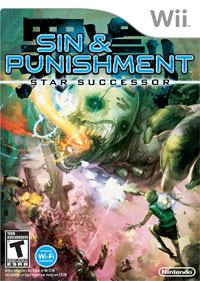 Players engage in nonstop shooter action as they’re propelled through this run-and-gun style game. Isa and Kachi are being hunted. They go on the run and on the defensive, shooting everything in sight. Sin and Punishment 2 is the long-awaited sequel to the Japanese Nintendo 64 cult-classic shooter. It brings a frantic arcade sensibility to a post-apocalyptic world.

* You can run on foot or take to the skies with a jetpack or hovering skateboard-like device to dodge enemy attacks or get a better lock on their targets.
* You can fire at targets in the distance or switch to sword attacks for close-range targets.
* The Wii Remote controller’s pointing ability is used to aim weapons, while the Nunchuk controller is used for positioning and maneuvering.
* Numerous settings include beautifully rendered cityscapes and dramatic underwater tunnels, all populated by fierce enemies.
* It’s all about the multiplier. The better a player’s skills, the more points are earned, and the bigger the bonus. You will want to play the game again and again to beat your personal best on each level. The better the performance, the bigger the multiplier and the higher the final score.