Every day Robert Saucedo shines a spotlight on a movie either so bad it’s good or just downright terrible. Today: A dollar for every Catholic in the world! 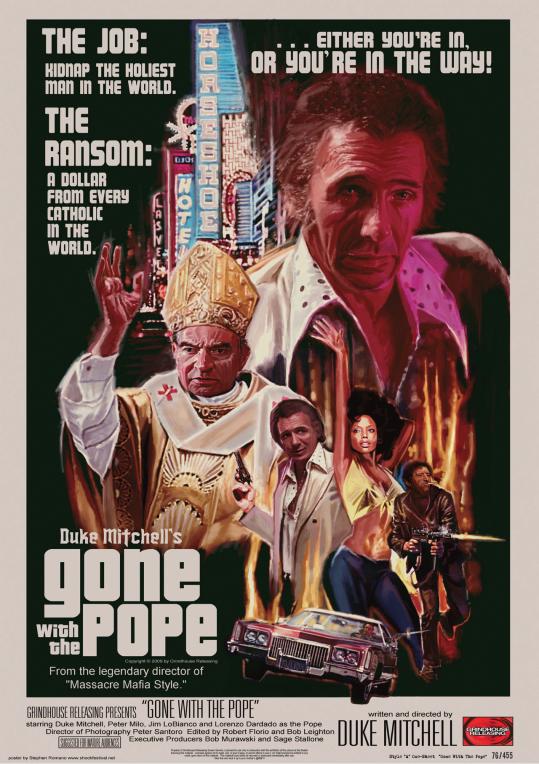 Originally shot in 1976, Gone with the Pope is currently enjoying its first theatrical release nearly 35 years later — after the film’s negatives and an unfinished work cut were discovered in writer/director/star/composer Duke Mitchell’s parking garage following his death.

Mitchell, a veritable one-man-band of filmmaking, intended Gone with the Pope (originally titled Kiss the Ring) to be a Godfather-inspired mafia heist film.

The finished product, though, is something a little more off the beaten path.

Mitchell stars as Paul, an ex-con who, after being released from jail, is given the opportunity to earn a little cash if he completes a hit job on seven hapless goons. Not one to ignore the big picture, Paul uses the money from his score as a down payment for the ultimate heist — one that will hopefully point him and his three best pals from prison towards a path of riches and luxury.

Paul and his three amigos plan that mystical final score — they’re going to kidnap the Pope. Their ransom? A dollar for every Catholic in the world.

Oddly, beneath the film’s greasy veneer lies some pretty impressive talent. Mitchell has a real eye for camera placement — giving Gone with the Pope a distinct visual panache that both plays homage and, at times, shamelessly rips off Francis Ford Coppola’s mafia masterpiece, The Godfather.

The film’s soundtrack, composed by Duke Mitchell and his son Jeffrey, is pretty damn great. By taking the usual Italian crooning that you would expect from an authentic New York pizza parlor and/or ‘70s Italian film and combining it a couple of kickin’ rock and roll songs that sound like a cross between The Who and the Rolling Stones, Gone with the Wind‘s soundtrack is better than it has any real right being.

Mitchell himself is not half bad as an actor. As Paul, Mitchell combines an aura of authenticity with a subdued elegance that, when stirred, offers a glimpse at a hidden passion. Paul is a complicated man.

Deeply committed to his love for his girlfriend — willing to even kiss puppies to show he’s a changed man — Paul is also deeply anti-Catholic. Kidnapping the Pope is not just about the money; Paul has some deep-rooted mistrust for the Vatican and its seemingly hypocritical practices.

When it comes to friends, though, Paul has a genuine love for his prison-met pals. By taking on the hit at the beginning of the movie, Paul has put himself in direct danger and put his relationship with his girl in jeopardy. There is little he won’t do, though, when it comes to paying back the kindness his friends showed to him while they were in the can.

That said, Paul is not above doing some pretty dick things to his friends — whether it be throwing his friend’s priceless family heirloom into the ocean or mocking his other friend’s sexual frustration by rounding up a morbidly obese woman for the two to double-team and abuse.

Paul is also incredibly racist — but apparently racism was charming in the ‘70s as Paul is able to woo a black girl by unleashing a downpour of ethnic slurs and racist humor. Who knew the way to a proud young black girl’s heart was to hand her $300 and tell her to buy some watermelon and chicken. 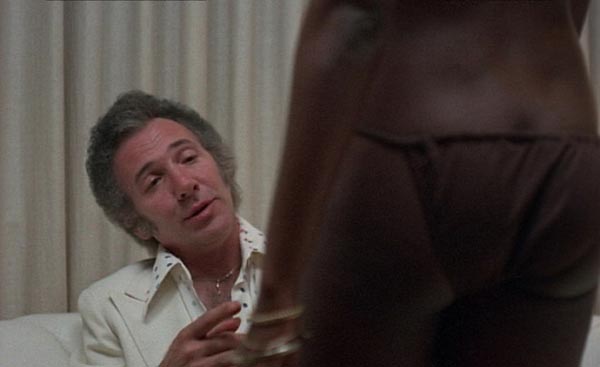 Racism’s effect on the libido is not the only proof that Gone with the Pope takes place on an alternate Earth.

In the world of Mitchell’s creation, snatching the Pope from the Vatican is so easy, Danny Ocean could recruit 10 mentally retarded cows and complete the heist with little to no problem. Without any real muss or fuss, Paul and his team are able to take the Pope from the safety of Vatican City and hold him hostage in a small yacht off the coast of Italy.

It’s on this boat, though, that Paul and his team begin their “tense” psychological showdown with the Pontiff. And by tense, I mean the Pope is able to take each of them aside and, with a few simple words, convince them of the error of their ways and help them see hidden truths about themselves and their faith.

But just when you think the movie is over and the team have learned the error of their ways; the movie proceeds to have another half-dozen endings. Gone with the Pope is the Return of the King of Mafia exploitation films.

Before you begin to think Gone with the Pope is the ‘70s version of Touched by an Angel, though, the film is pure exploitive garbage. Murder, breasts and Las Vegas are the only holy trinity that Gone with the Pope bends down one knee to. That, and bad acting.

Besides Mitchell, the casts’ acting is collectively as stiff as a board — with the film’s actresses seemingly chosen more for their tasty appearance than their ability to deliver lines without looking like they are reading them off a cue card. During close ups of the actresses, you can even see their eyes moving back and forth as they read their lines!

Saved from obscurity and finished by Sam Rami’s go-to-editor Bob Murawski, Gone with the Pope is not one of those seemingly lost legends of filmland that, when discovered, will change the way people look at cinema.

A charming plot and a general sense of badassary that radiates around Mitchell’s character help to distinguish the film from most of the other grindhouse mafia movies of the ‘70s. Bad acting and a bizarre ending also help to make the movie a fun experience — especially when seen with a lively crowd at your local arthouse theater.

In the end, though, Gone with the Pope is exactly what it promises to be — a cheaply made impendent film that hoped to ride the coattails of the mafia craze that came post-Godfather.

Mitchell, a man with plenty of talent, did his best to make something that rose beyond its initial aspirations but, despite the hard-work of the restoration team responsible for uncovering and finishing the film, Gone with the Pope will not permeate mainstream awareness — instead living the rest of its shelf life in the fringes of cult consciousness; nestled amidst the rest of the other ‘70s films of its ilk.

Robert Saucedo also is doomed to exist in the fringes of cult consciousness. Follow Robert on Twitter @robsaucedo2500.

Best Tips On How to Get More Discord Members