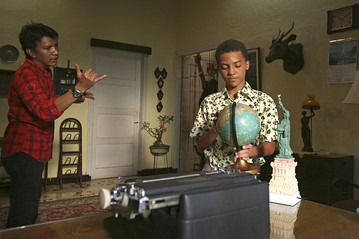 Who says George W. Bush is the only president who can’t have a movie made about his life while he’s still in office?

Little Obama is an Indonesian film that will have its world premiere on June 30. Loosely based on the few years President Barack Obama spent in Indonesia as a child, the film is directed by Damien Dematra, who also wrote the novel the movie is adapted from. The film’s full Indonesian title is Obama Anak Menteng.

14-year-old Hasan Faruq Ali, an American, plays the young president who, 40 years ago, moved with his mother to Indonesia. Little Obama only finished filming last week but Dematra is already nearing finished with post-production. The movie, as you can see from the trailer below, seems to take the basic legend of Obama, mix in some Karate Kid, throw in an ounce of Indonesian melodrama and sprinkle on some pretty weird homoeroticism for a movie that will undoubtedly never get released theatrically in the United States.