Blood on the Highway – DVD Review 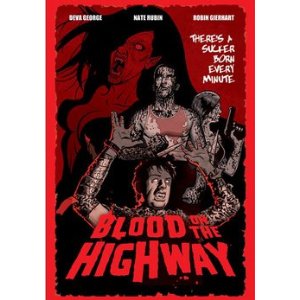 That’s pretty much my reaction all the way through Blood on the Highway, and that’s actually not a bad thing. This is the kind of movie that you almost feel ashamed of liking, mainly because it’s so incredibly stupid and crude. If I was fifteen I’d probably love this movie, but since I’m not I’m only amused by it.

On their way to a rock concert, Sam, Carrie, and Bone stop for gas in the small Texas town of Fate. Unfortunately for them, the town is overrun by vampires. Fortunately for them they just happen to be some of the stupidest vampires in the world. If they’re to survive they’ll just have to be a little smarter than the vampires.

The plot’s really only incidental to the movie experience: the film is basically an excuse for people to say incredibly stupid things, act violently, and get sprayed with gallons of fake blood. I haven’t heard this much cursing since the last time I watched a Harvey Keitel movie and I have to say that these guys are pretty inventive when it comes to their word choice. It’s remarkably funny, as well.

I almost get the feeling that the screenwriter watched a bit too much South Park growing up, because it definitely has that “anything goes, let’s see how much we can shock people” vibe that Matt Stone and Trey Parker seem to live by. Even the songs sound like something DVDA would come up with, especially the montage power ballad that plays while the humans weapon up for the big vampire showdown.

Nicholas Brendon (Xander of Buffy the Vampire Slayer fame) is in this movie and boy do I feel sorry for him. It’s becoming painfully obvious that Buffy was the highlight of his career and now he’s stuck doing junk like this. As much as I enjoyed seeing him in a role, it was still sad that it happened to be this role.

Blood on the Highway will make you laugh but it’ll also make you feel like you’ve lost a couple of IQ points along the way. The people involved in this went all out, and to their credit it is a surprisingly entertaining ride, but it’s definitely juvenile. I wouldn’t be surprised if this becomes a minor cult hit. Whether it should or not is up for debate.

The movie is presented in fullscreen 16×9 aspect ratio with the audio track in English 5.1 Surround Sound. English subtitles are provided for the hearing impaired. In terms of quality this movie is fine, but certainly not great given that it’s a very low budget production.

Unbelievably, the extra features on this aren’t half bad. The behind the scenes featurette was a bit boring, but the employee orientation video was hilarious and is a worth a watch.

Fifteen year olds and college Freshmen are going to love Blood on the Highway. It’s crude, bloody, and way over-the-top. I enjoyed it well enough, but it certainly isn’t going to rank very high in my ratings for obvious reasons. I will say that if you’re a fan of South Park you’ll probably like this. Sort of recommend. Kind of.