To go along with the match listing we reported a few weeks ago for WWE’s forthcoming compilation release, Raw: The Beginning – The Best of Seasons 1 & 2

, Silver Vision has updated its product page with cover art. 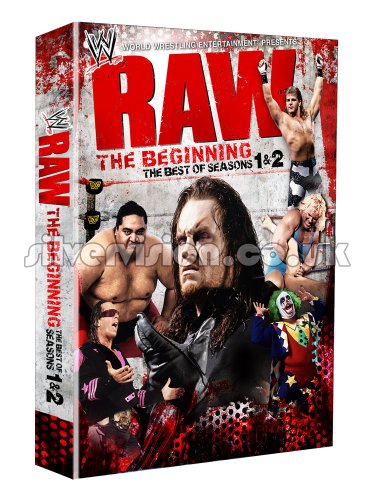 On January 11, 1993, prime-time cable TV was introduced to Monday Night Raw. The show was a breakthrough for televised wrestling. Instead of airing taped matches from various arenas, Raw was shot to a live audience. At its inception the show lasted an hour and all episodes originated at the Manhattan Center, a venue that later played host to two ECW brand pay-per-views, two WWE owned ECW One Night Stand PPVs, and numerous Ring of Honor events, specifically mega cards like Glory by Honor and Final Battle. The debut show featured two competitors who would go on to be two of the biggest mainstays in World Wrestling Entertainment: Shawn Michaels and The Undertaker.

In other WWE DVD news, it appears that the U.K. event Rebellion 2002 has been announced as a title that is soon to go out of print. The card features Jamie Noble taking on Tajiri and Rey Mysterio Jr. in an elimination match for the Cruiserweight title; a SmackDown! Team Championship match with four of the “SmackDown! Six” – Kurt Angle and Chris Benoit vs. Los Guerreros (Eddie and Chavo Guerrero Jr.) and the main event of WWE Champion Brock Lesnar and Paul Heyman taking on Edge in a Handicap Match. The DVD also features the bonus match of Shawn Michaels vs. The British Bulldog for the European Championship at One Night Only. That match is also featured on the most recent Shawn Michaels retrospective, My Journey.