Every day Robert Saucedo shines a spotlight on a movie either so bad it’s good or just downright terrible. Today: Metzler, You Betzler! 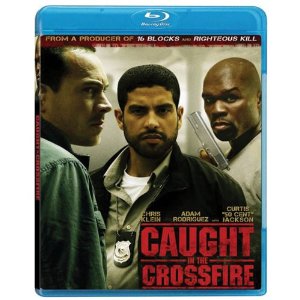 After Chris Klein, the star of American Pie and Rollerball, had an audition tape for Mamma Mia! leaked onto YouTube, I felt sorry for the actor.

While he obviously didn’t have the voice to sing ABBA music, surely it was a bad day for him in front of the camera. Klein, while never an award-worthy thespian, turned in some decent performances in a few late ‘90s teen comedies — surely in the years since he debuted in Election he hadn’t become as terrible of an actor as he appeared to be in the audition tape.

Well, after watching Klein’s latest film Caught in the Crossfire, a direct-to-DVD cop thriller, it’s obvious that Klein has, in fact, had a run-in with a talent vampire — that elusive supernatural creature of the night that turns once promising teen actors into ham-fisted zombies doomed to a life of perpetual b-level independent movies.

In Caught in the Crossfire, Klein plays Briggs, a no-nonsense cop who does nothing but shout and apparently possesses only one facial expression — a look that manages to appear simultaneously amazed and constipated.

Briggs’ partner is Shepherd (seriously, could writer/director Brian A. Miller come up with even more stereotypical-sounding movie cop names?). Played by Adam Rodriguez, Shepherd is the yin to Klein’s raging yang — a hearty Chicano with a soft touch but who still manages to have a love for putting himself in unnecessary risk.

Together, the two cops find themselves embroiled in a massive cover-up that involves crooked police, dead bodies and a Rashomon-style framing sequence.

The film picks up deep into the plot’s action — choosing to play fast and loose with chronology. When a film mixes it up with story structure — layering flashbacks on top of flashbacks — it always takes a massive risk for failure. Without characters or a story that grabs you by the nut sack from the get-go, an un-linear story risks loosing audiences unwilling to put in the effort that it takes to connect the dots.

Unfortunately, Caught in the Crossfire fails to hit the target instead kicking viewers into the deep waters of its plot pool — a pool full of lukewarm water, a bit too much chlorine and perhaps even a floating turd or two.

Caught in the Crossfire tries to hide the fact that it has a sub-par storyline with an attempt at a flashy storytelling device. After the film’s initial action, the story kicks into a lengthy interrogation room sequence where the two cops are quizzed over what went down the previous night. Stories are analyzed and flashbacks are shown that finally clue audiences into why they should care about what they just finished watching.

It’s in these interrogation room sequences that Chris Klein really shows he lost his acting marbles. He is a Tasmanian devil of emotion — beginning with a boiling rage delivered like a person who is trying to do an Al Pacino impression but has only seen the actors’ last ten years worth of work and, in a split second, switching to a quiet pensiveness warped though a William Shatner lens. Klein’s acting is so out there — so mind-boggling bad — I’m half convinced the movie was an elaborate practical joke. A parody of his less-successful peers, if you will.

Curtis “50 Cent” Jackson gets third billing in the film’s credits but his role essentially amounts to a cameo — playing a police informant whose unfortunate duty is to be the bearer of bad exposition.

Caught in the Crossfire‘s biggest crime is that it’s boring. Long drawn out flashbacks and scenes of Klein chewing the scenery drag out what would otherwise be a 45-minute episode of any generic cop procedural found on television.

When the movie builds towards its last predictable — yet unnecessary — shoot-out, audiences will already have checked out mentally.

Not even a somewhat clever twist ending that manages to half-explain the film’s previous parade of stupidity shown by Briggs and Shepherd can save Caught in the Crossfire from the hells of mediocrity.