See, I love the Legion, which is why it pains me read the current title. We’re two issues into the current run and I’m so far from enjoying myself that it’s not funny.

I guess I’ll give you a little background about my history with the Legion. The first time I can remember encountering the Legion was at a Circle K newsstand. That’s where I saw the cover to World’s Finest #284. 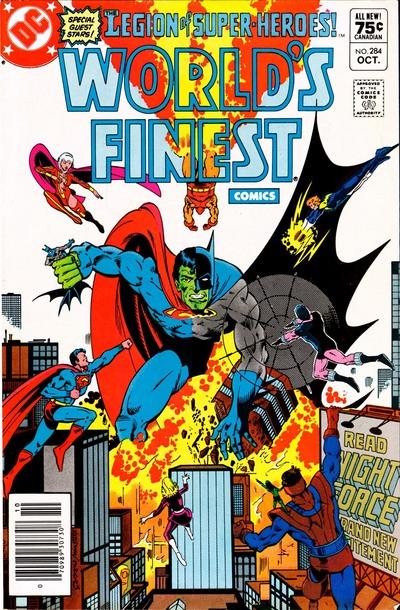 As you can see it’s a striking image. I mean it’s got a giant merged Superman/Batman creature with green skin. How could you not be attracted to that cover? I don’t really think I was aware of all of those other characters on the cover, they weren’t the draw for me. I didn’t actually get the issue until years later, but that cover always stuck with me.

The next time the Legion caught my eye was the cover to Legion of Super-Heroes #51. It’s got Polar Boy pointing at Brainiac 5 and demanding that he be found guilty. This time I saw the issue at a spin rack in a B. Dalton Bookseller. 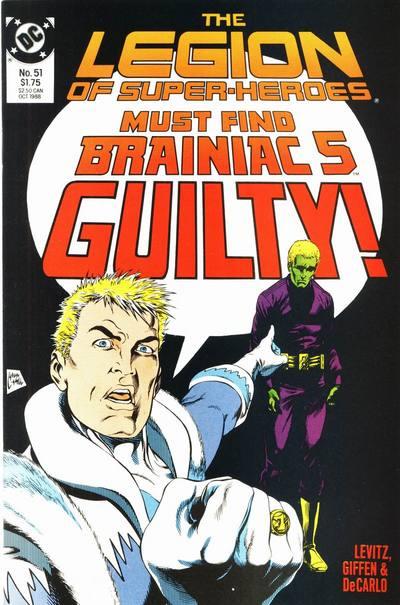 I begged my Aunt to buy it for me and thankfully she did. From that point on I stuck with the Legion through Zero Hour. In fact the “Baxter” Legion of Super-Heroes was the first title that I began collecting, in terms of hunting down back issues.

I didn’t get into the post Zero Hour Legion for a couple of reasons. One was because I really loved the Five Year Gap, so I was irked that I’d lost my first relatively mature comic. But I’d also been cutting back on the titles that I was collecting, so the reboot was a pretty easy jumping off point.

I did get on board for DnA’s Legion Worlds and Legion relaunch. I was also around for Waid and Kitson’s threeboot. They were both adequate void fillers for the Legion that I loved.

But you can imagine my excitement when it was announced that DC had plans for the Legion and those plans included Geoff Johns. I mean Johns had revitalized Green Lantern, Teen Titans, JSA and The Flash, so clearly the Legion was in good hands. 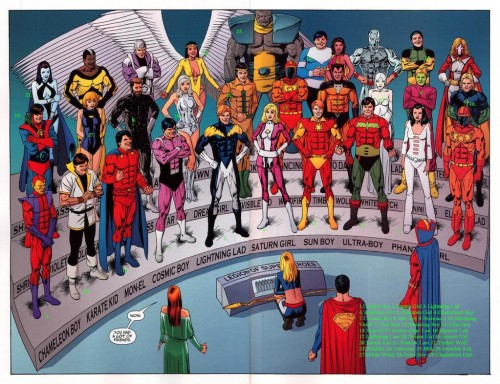 I accepted “Superman and the Legion of Super-Heroes” and tolerated Legion of 3 Worlds. I was hoping for better, but I was relieved just to have the team in the conversation.

I felt better when I found out that Paul Levitz would be returning to helm the new Legion of Super-Heroes monthly. It was Levitz’s take that originally got me hooked on the team. He knew how to handle the large cast and he was intimately familiar with the characters.

(I suppose that I subconsciously forgot about how Paul Levitz closed out the initial run of JSA in dreadful fashion.)

And after two issue, I’m less than satisfied and have more than a few problems with the current Legion of Super-Heroes.

First off, the book is confusing and I say that as someone who has a college degree and has been reading comics for a couple decades. I’ve got a pretty decent comic IQ, loved 100 Bullets and I’m struggling with the current Legion title.

Given that none of the Legion’s Espionage Squad are present, I’m guessing that this arc takes place concurrently with the “Brainiac and the Legion of Super-Heroes.” But that’s about as close as I can nail things down and that’s just in terms of recent continuity. I’ve got no idea where this fits in the overall Legion continuity.

It’s frustrating not knowing who knows what about whom. Given Saturn Girl’s hairstyle, I’m guessing she had run in with the Time Trapper, but did Wildfire ever get his energy form in line, or has he been stuck in his containment suit forever? Did Brainy quit the Legion after the Time Trapper scandal? Was Polar Boy ever elected leader of the Legion?

I jumped on the Legion bandwagon fifty one issues into the Baxter series, so I’m fine with being in over my head in terms of plot development, but there’s really no reason why I shouldn’t be able to find sound footing within the first two issues of a series. Especially one that’s allegedly building upon established continuity.

That might sound like fanboy nitpicking, but that’s what you get when you bring back a fan favorite version of a team and leave their continuity shrouded in ambiguity.

The current series also suffers from a general lack of foundation. Legion of 3 Worlds was meant to justify the existence of all three versions of the Legion and return the Silver Age version to prominence. But it didn’t actually provide any support for the current title, other than to say “this is the Legion that’s relevant.”

The same can be said of the Legion’s recent adventures in the 21st Century. It served basically as a nostalgic nod to, and super decompressed telling of Legion v.4 Annual #2. 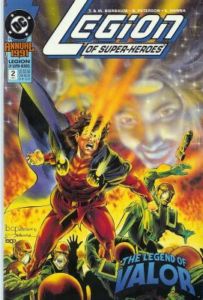 But enough of my complaining. I’ll offer up some solutions for how DC can fix the Legion mess. I’ve heard rumors that comic pros actually check out the site, so on the off chance someone from DC is actually reading this, just know that I’m talking to you.

Solution #1: Secret Files & Origins – Ok, so it’s a little too late for that now, but if there were ever a series that needed a pre-launch Secret Files and Origins it’s the Legion of Super-Heroes. Not The Flash. Not Green Lantern.

With the sheer number of characters and the crushing continuity, it would have been thoughtful for DC to publish this book for newbies interested in joining the Legion as well as old timers who needed a refresher course.

In addition to profiles of the most prominent Legionnaires, a timeline feature (like the original Secret Files and Origins used to have) would have also cleared a few things up.

Solution #2: McCauley Industries Omnicom – One of the cooler aspects of the 5YG Legion was that backstory was explained via Omnicom. Text pieces were included every issue to explain what went down during the five year gap. Not only were there nuggets of info about what happened to your favorite Legionnaire, but it also fleshed out the entire universe, literally.

Now maybe it’s asking too much, but I think it’d be nice to see the return of the Omnicom so we can find out what’s happening around the United Planets.

Solution #3: Character Bios – Ok so the Secret Files is moot and the Omnicom seems like too much work. How about you split the difference? You include character bios for the team and supporting cast in every issue. It’d be just like the supplemental Who’s Who pages that were included in Annuals way back in the day.

Think about the artists that’ll come crawling out of the woodwork to draw a pin up of their favorite Legionnaire. Getting big time talent is an added bonus and will make more issues move off of the shelves. Think about it.

Solution #4: Legion of Super-Heroes Forever – Hey if Marvel can launch an entire line picking up on the dangling plotlines from their mutant heyday, I don’t see why DC can’t swipe the idea so those of us who loved the 5YG Legion. Bring back the Bierbaums, cut Giffen loose from Booster Gold and cater to those fans who are now mature and have much more money to spend on various collected editions and merchandise.

In addition to getting the (5YG) Legion Forever, you could also team up with Apple and make a Omnicom edition of the iPad. You could release 5YG figures with the “build a figure” being Blok. That way those who get the set could completely recreate Blok’s fateful confrontation with Roxxas.

So there you have it. That’s my beef with the Legion and sets I’d take to correct the current course. As usual, I’m just a fan sitting with his laptop, but maybe someone will take heed and restore this glorious franchise to the status that it deserves.

Top Ways To Learn Self-Defense, And How To Get Started