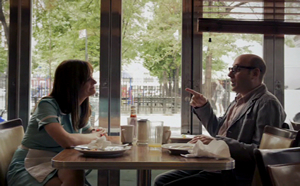 In this week’s episode of White Collar Mozzie has a crush.
Mozzie is lactose intolerant.
Mozzie has perfect recall.
Mozzie is a hero.

I loved every minute of it. I’m not going to pretend to be unbiased. I’m a Willie Garson fan from way back and he’s the reason I gave White Collar a chance in the first place. Up until now my response at the end of each episode has always been to wish there was more Mozzie. “By the Book” is the White Collar I’ve been waiting for. I’m sure next week they’ll once again move the spotlight back on Neal Caffrey (Matt Bomer) and his borderline narcissistic personality, but at least for this episode Neal gets a chance to show some concern for a friend. We and Peter (Tim DeKay) get to see him in a slightly different light and, now that Mozzie has gotten past his FBI-phobia, we also see the major characters becoming more tightly knit.

Since Neal and Peter aren’t front and center for this one, neither is the who-killed-Kate-and-what-the-heck-is-up-with-that-Russian-music-box© story. As for the mystery-of-the-week, outside of some revelations about Mozzie’s personal life, it isn’t really a mystery once they find out the kidnapping is really a kidnapping, it’s a pretty straightforward narrative. Mozzie’s reactions to and interactions with the FBI is what the story is all about. It’s an exciting change of pace for the series and it’s nice to see Willie Garson finally get more to sink his teeth into. As usual Peter gets to show off his super smart, spidey-sense FBI skilz and impeccable timing. Agent Jones (Sharif Atkins) gets a chance to have a little fun with Neal and Mozzie and an impressive piece of 1970s’ pimp-wear. “Whatever, Travolta.” (He’s going to want to play with them all the time now.)

The cherry on top of my Mozzie sundae is guest star Diane Farr who plays the object of his affection, diner waitress/kidnapping victim Gina De Stefano. She’s also a favorite of mine especially when she says things like, “Willie Garson is indeed the funniest and funnest man alive.” (Yesterday on Twitter.) I loved her in Numb3rs and Rescue Me and in a recent guest appearance on Desperate Housewives. She’s got terrific range. I hear at one time she actually was a waitress in NYC so she does bring a little realism to her role here… not to mention the adorable pig tails.

I doubt Jacinto Taras Riddick (the bad guy, Navarro) has any real life experience, but he is a lot meaner than the usual high-end art thief/corporate raider/bank robber etc. that White Collar usually serves up. Sure, a cigar lounge may be an unusual choice of locations for a crime lord (or maybe not), but he looks really mean, right? He does get one funny line that he knocks out of the park: “I care deeply about the trees.”

He’s only got the one scene, but I thought Jayce Bartok as Devlin, the ID guy who unwittingly gives them the name they’re looking for, had a nice little guest spot. He’s more of the classic non-threatening criminal White Collar specializes in. (When I lived in NYC all my neighbors, including the hookers, looked like they could beat the crap outta this guy.)

My one quibble? That’s a tough one because I enjoyed this one so much from start to finish, but I was a little disappointed that Diane Farr didn’t get more to do and didn’t really interact at all with the rest of the cast. Maybe they’ll bring her back at some point and give her a little more screen time.

My favorite part? Mozzie’s FBI entrance and almost panic attack. Very nicely done: acting, camera work, music. All superb. “In the Hall of the Mountain King” was an inspired choice.