Last week’s Shadowland issue (Shadowland #2) with its morphing of Daredevil into a misguided-hoping-to-do-good-villain strikes me as Civil War 2.0 Jr..

“Civil War 2.0” because his rants and justifications sound an awful lot like Tony Stark / Iron Man during the height of his S.H.I.E.L.D. Director days and the superhuman registration era…. you know the “if you’re not with us, your against us days”….. “I’m doing this for you” condescension.

I added “Jr.” to the mix for two reasons:

(1) Unlike Civil War which consumed all of the U.S.A., Shadowland focuses on New York. Not even the full state, nor the full New York City, but Manhattan Island it would seem.

(2) Daredevil seems to be like Tony Stark / Iron Man from a few years ago, but more petulant and quick to judge….. like an adolescent…. a Jr.… “Dead or alive” instructions by DD to the Hand to take-out Spider-man, Cage, Iron Fist, and others? Really? That’s more absurd than what he supposedly did to Bullseye.

In the end, I can’t help but feel manipulated. This really can’t be the best that Marvel can do with its “street characters”, can it? And if it is, then there must be swerve coming, but I can’t image that I’m the only one that “hears” Tony Stark from a few years ago from under Daredevil’s cowl.

For that matter, do we know that’s Matt Murdock under the mask? Where’s Wolverine’s mutant “sniffing” power when you need it….. 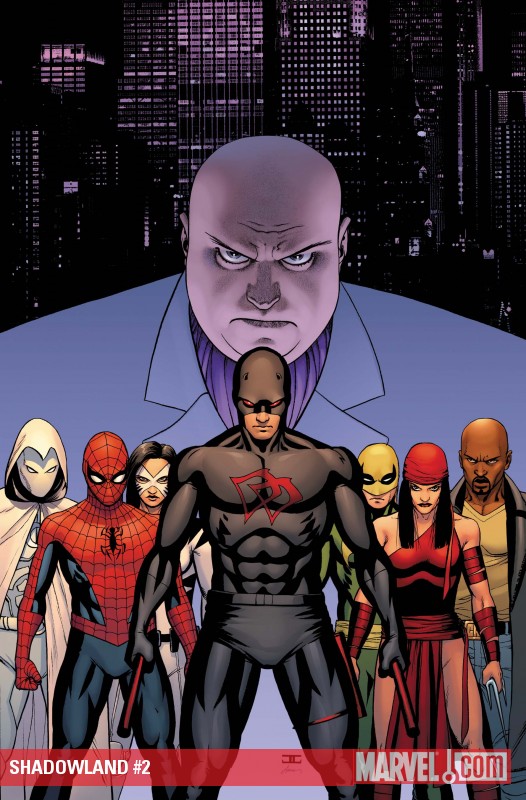