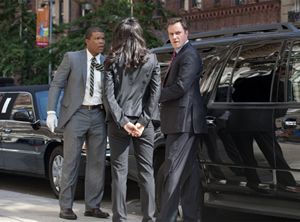 I confess this week’s episode of White Collar, “Unfinished Business”, was a bit of a letdown for me. The mystery may have been a little more solid. Matt Bomer’s performance as Neal Caffrey may have been one of his best to date. The season long arc may have been much better served, but it sort of killed my Mozzie buzz from last week. Sure he’s around for a little exposition and wine mooching, but now I have unrealistically heightened expectations about Willie Garson’s screen time. Okay, so it’s a more balanced and typical episode. It’s just not quite as much fun for me.

The mystery of the week involves a real estate magnate, Edgar Halbridge (John Pyper-Ferguson), suspected of stealing Japanese bearer bonds. Sara Ellis (Hilarie Burton), an investigator who once testified against Neal, is on the case for an insurance company and has agreed to assist the FBI. They’ve determined that Halbridge has arranged to meet the mysterious Mr. Black, who they believe will smuggle the bonds out of the country. Since the two suspects haven’t met, Neal is tapped to impersonate the smuggler. Unfortunately, Mr. Black isn’t there for the bearer bonds. He’s been hired to kill Sara. The case is a little fuzzy around the edges and the dénouement is sort of rushed, but as an intro to the new girl the episode is pretty thorough.

Last week’s episode didn’t touch on the season long mystery of Kate’s murder at all, but they made up for it this week, introducing a new angle. Neal and Mozzie infiltrate an airplane hangar where pieces of Kate’s exploded plane are strewn across the floor like a partially solved jigsaw puzzle. When they’re caught snooping around, Neal cons an unsuspecting employee into having an FAA report sent to Sara, since he has her card handy and figures they won’t balk at sending the report to an insurance company. I don’t know how far he thought that one through, but it looks like Neal will have to cozy up to her a bit in order to get what he wants and since she’s reportedly in half a dozen episodes, that’s either going to be very challenging or very cozy indeed.

Hilarie Burton (One Tree Hill, The Secret Life of Bees) plays Sara Ellis and I’ve got to admit I was pleasantly surprised. A quick glance through her credits tells me I’ve never seen anything else she was in and never wanted to, but she acquits herself well here playing the prickly investigator who’s a workaholic and all around tough cookie… with a soft side. Maybe a little cliché, but I thought she pulled it off. She does have certain edge I like and while the character is apparently not altogether immune to Neal’s charm, at least she gives the distinct impression that she won’t be compromising her principles or her bank balance on his behalf. Ms. Burton was particularly good in those one-on-one scenes with Matt Bomer and Tim DeKay.

One other guest actor I’d like to mention was Ivo Velon as Emilio, the car thief in the teaser. I don’t know of anything else he’s done, but my guess is if you’re looking for someone to take on a Euro-trash role he’s the go to guy. He really nailed it.

My one quibble? Maybe I missed something, but why is Peter’s wife advising him to comfort the pretty young insurance investigator late at night? That’s not the kind of advice you’d think she’d be inclined to give him especially when’s she’s out of town. I realize she’s supposed to be an empathetic character, but that seemed like a lot of concern for a stranger and it seems like Peter must have shared way too many details about the case.

My favorite part? Mozzie’s and Neal’s visit to the hangar was an intriguing way to bring Kate’s murder back into the story. Matt Bomer was doing a good job in that scene selling the grief, the guilt and the obsession, then slipping into con man mode for Roy (Robert Clohessy) and then back again into the grieving lover, nicely done. As usual he’s ably supported by Willie Garson who plays a gently toned down Mozzie.

As always my heart’s desire for future White Collar episodes is more Willie Garson, but I must say I was thrilled to see John Larroquette in the previews for next week: another great guest star acquisition.

“I’m glad my grasp of gothic fiction is a source of amusement for you.” — Neal Caffrey

Next Week on White Collar: “In the Red”